Schlierkamp arms look massive, prompting fans to question whether a Masters Olympia comeback could be in his future. 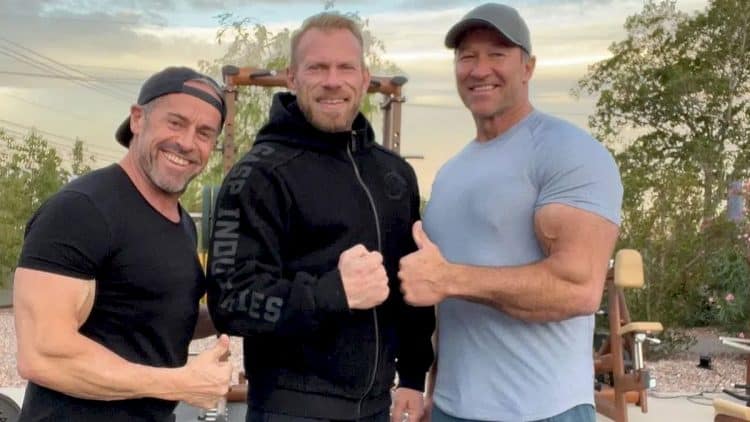 Gunter Schlierkamp cemented himself as one of the most prominent German bodybuilders of his era. While enjoying retirement, Schlierkamp shared a jacked physique update at 52 years old.

Standing at 6″1′, Schlierkamp led a successful IFBB career for almost two decades. Representing mass with class, Gunter managed to push some decorated legends during his time at the top. He shared the stage with names like eight-time Mr. Olympia Ronnie Coleman, four-time winner Jay Cutler, and the timeless wonder Dexter Jackson.

In addition to performing at the Olympia show a number of times, Schlierkamp was named the Greatest German Bodybuilder of All Time in 2003 by the “Sports Revenue Magazine.” Trained by respected mastermind Charles Glass, Gunter eventually stopped competing in 2006 following his final Olympia appearance where he finished sixth.

Earlier this year, fans were happy to hear that Olympia Promoter Jake Wood said the Masters Olympia contest would ‘definitely’ be returning in 2023. While Schlierkamp has made no mention of coming back to compete, many fans think he could do some real damage at a Masters competition.

Last month, bodybuilding veteran Chris Cormier and IFBB/NPC judge Terrick El Guindy specified that 2023 Masters Olympia is rumored to be returning next Aug. or Oct. They also revealed that the current plan is to include a Men’s Open division with an age cap of 45+.

Schlierkamp stays in shape, and this is something many retired Pros are starting to take more seriously. Competitors like Jay Cutler are amid physique transformations. His progress was on full display a few weeks ago during a training collaboration. While rumors of a comeback circulated, Cutler made it clear he’s not returning to a competition stage.

Other bodybuilders like Dennis Wolf, Dexter Jackson, and Kevin Levrone appear to be in fantastic shape as well. And now, fans can add Germany’s 52-year-old Schlierkamp to the list of athletes who still look ripped in retirement.

In a recent post made to Instagram, Gunter Schlierkamp looks to be in shape and healthy. He was accompanied by fellow German bodybuilding veteran Dennis Wolf.

“Great time at the Wolf’s Den. I love the equipment that @dennisbigbadwolf has in his Wolf’s Den. It is always good to see Dennis and Katja . Two of the nicest people I have ever met.” Gunter Schlierkamp wrote.

The last time fans heard from Schlierkamp, he was responding to some provocative statements made by fellow veteran Kevin Levrone. Levrone maintains that the Mr. Olympia organization ‘hand picked’ its winners back when he competed. It may have cost Levrone fame and fortune, but he says he didn’t take the politics of the sport personally.

According to Schlierkamp, he had a great relationship with Joe Weider, and yet his placing at Olympia never improved dramatically. Schlierkamp doesn’t believe Weider had a hand in ‘fixing’ anything despite Levrone’s comments.

Longevity is hard to come by in bodybuilding. Given his latest update, Schlierkamp is keen on preserving his health for the years to come.

Steve Kuclo Ends 2022 Bodybuilding Season: ‘I Have Shut It Down For The Year To Focus on Family’