With the Olympia Weekend breathing down our necks, here are our picks for the top five in the Classic Physique division. 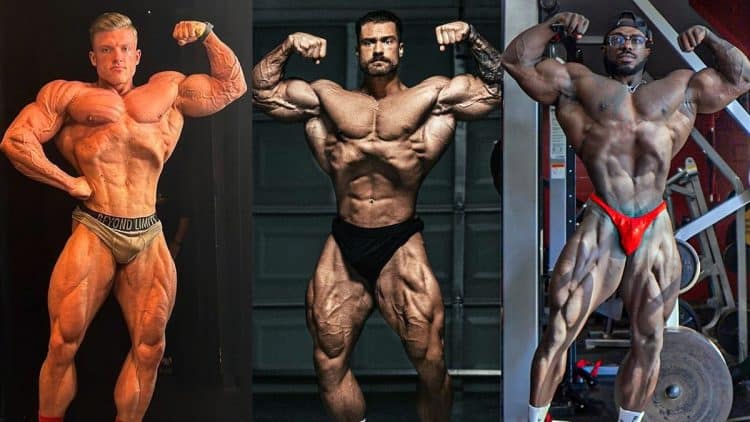 Classic Physique is one of the most sought-after divisions in the pro bodybuilding circuit. The division’s meteoric rise at the prestigious Olympia stage has made many bodybuilders from different divisions jump ship.

The Classic Physique division debuted at the Olympia in 2016. Three champions have been crowned in the short but glorious history of the division. Interestingly, two Classic Physique Olympia champions will lock horns at the 2022 Olympia for the bragging right to call themselves the best Men’s Classic bodybuilder in the world for a year.

The 58th edition of the Joe Weider’s Olympia Fitness & Performance Weekend is scheduled between Dec. 15 and 18 in Las Vegas, NV. The Classic Physique Olympia contest will go down on Dec. 17, Saturday.

The three-time and reigning Classic Physique Olympia champion Chris Bumstead will step on the Olympia stage as the favorite to bag his fourth title. However, 68 other contestants are hard at work to upset “CBum”.

This article lays down our prediction of the top five finishers at the 2022 Classic Physique Olympia. These are the athletes you should keep an eye out for at the Super Bowl of bodybuilding.

Given below are our picks for the top five spots at the Classic Physique Olympia:

“The Black Swan” has been working with bodybuilding legend Chris Cormier to improve his physique. He has gained muscle maturity, density, and size in the off-season.

The 2017 and 2018 Classic Physique Olympia champ earned his pro card as a 212 bodybuilder but switched to the Classic Physique division in 2016 after a couple of underwhelming performances in 2014.

However, without delving into details, Ansley recently announced that the 2022 Olympia will be his last contest in the Classic Physique division. He will reveal his future plans after the Olympia.

Ansley finished third behind reigning Classic Physique Olympia champ CBum and runner-up Terrence Ruffin for two consecutive years. However, we see him drop two places at the 2022 Olympia because of the new crop of bodybuilders in the division.

Ramon Rocha Quiroz, popularly known as Ramon Dino, surprised the pro bodybuilding circuit by placing fifth at his Olympia debut in 2021. He then annihilated his competition at the 2022 Arnold Classic Classic Physique by securing a second-place finish behind two-time AC champ Ruffin.

Ramon Dino comes from humble beginnings and is leaving no stone unturned to make it big in pro bodybuilding. The Brazilian bodybuilder has a huge social media following that supports him at every step.

Ramon Dino’s latest Instagram photos show that he has improved his physique since his Arnold Classic second-place finish, and we expect him to improve his standing come Dec. 17.

The German bodybuilder finished fourth at the 2021 Olympia on his debut. He then finished third behind Ruffin and Ramon Dino at the 2022 AC Classic Physique.

“The Miracle Bear” decimated his rivals at the 2022 Boston Pro and 2022 Kuwait Classic Pro to win both shows. Kalecinski didn’t stop at that. The German bodybuilder returned to the United States in Oct. 2022 to train with bodybuilding biggies Nick Walker, Ruffin, and CBum. Experts believe Kalecinski’s recent USA tour was not for leisure, but he wanted to check on his competition and size up their physiques — and size up he did!

Kalecinski didn’t shy away from posing with his fellow competitors after their workouts. The pose downs did not only let us compare him with his top competition but also showed off his confidence.

Kalecinski’s new-gained size and improved conditioning tell us that he’ll move up a spot from his 2021 Olympia performance. Notably, the German bodybuilder could also upset Ruffin, considering he is coming off two pro show victories and has momentum behind him.

Experts believe that the 2022 Olympia is mainly a battle between two guys — Ruffin and Bumstead. “Ruff Diesel” has been on CBum’s tail for the last two years at the Olympia and is considered a top dog to unseat the reigning champ at the premiere bodybuilding show.

Besides his incredibly proportionate physique, Ruffin holds the ability and the talent to sway the judges with his immaculate posing skills. His recent Instagram physique updates are probably giving other contestants sleepless nights.

Ruffin’s perfect X-frame — wide shoulders, narrow waist, and thick quads make him one of the most balanced and proportionate athletes in the sport. His latest progress pics prove he is leaps and bounds better than the package he brought at the 2021 Olympia.

It’d be safe to say that Bumstead is one of the most popular bodybuilders of the 2010-2020 era. Many even credit him for the success of the Classic Physique division.

CBum’s size, density, symmetry, and conditioning put him in a class of his own. His posing routine is a treat to watch, and many pro bodybuilding aspirants and hobbyists idolize the Canadian bodybuilder for how he conducts himself off and on stage.

Going by his recent physique updates on Instagram, CBum appears to be in the best shape of his life. This combined with the fact he is now working with “The Pro Creator” Hany Rambod, has his fans and competitors on the edge of their seats.

CBum is undoubtedly the favorite going into the 2022 Olympia. His fans will be rooting for him when he takes the stage for a four-peat.

We used the following metrics for our Classic Physique Olympia top five predictions:

The Fitness Volt team always has its finger on the bodybuilding industry’s pulse. We follow every pro bodybuilder year-round through thick and thin.

We also analyze every social media post — photo, video, and text — a pro competitor publishes. This puts us in a position to evaluate how the athletes on a roster stack up against one another.

Although past performance is not indicative of future success in pro bodybuilding, momentum can play a role in assessing how a competitor could perform at upcoming shows.

We use an athlete’s past performance at the Olympia and in shows leading up to the marquee bodybuilding show as markers to predict their placings.

Like the Master of Whisperers (a petty Game of Thrones reference), we have our little birds spread throughout the bodybuilding circuit. We are among the first to know if a contestant has changed coaches, suffered an injury, fallen ill, or even missed their flight to a show.

While these might not sound like big issues, they can have a big impact on an athlete’s performance at a bodybuilding show.

Here are the 69 bodybuilders listed to take the stage at the 2022 Classic Physique Olympia:

Given below is the list of all Classic Physique Olympia champs since 2016:

Bumstead is the winningest champ in the Classic Physique Olympia history.

If Ansley can pull off a stunner and recapture the Classic Physique Olympia throne at the 2022 Olympia, he’ll become the first bodybuilder in the division’s history to win back the title after losing it.

However, if any other bodybuilder besides Ansley dethrones CBum, we will have our fourth Classic Physique Olympia champ.

Check out our in-depth breakdown and a history lesson on the Classic Physique Olympia division.

While Ramon Dino, Kalecinski, Ruffin, and Ansley will be waiting for CBum to miss his mark at the 2022 Olympia, experts believe Rambod will ensure he shuts the door on his competition’s faces as soon as he steps on the Olympia stage.

Nonetheless, this is pro bodybuilding and anything can happen until the winner is announced. Will Bumstead hoist his fourth Classic Physique Olympia trophy, or will we see a new champ crowned when the Olympia returns to Sin City? Only time will tell.

If you cannot make it to Planet Hollywood for the Olympia Weekend, you can catch the live action on pay-per-view on the Olympia Productions website. Alternatively, you can tune in to Fitness Volt for the latest 2022 Olympia updates and coverage.