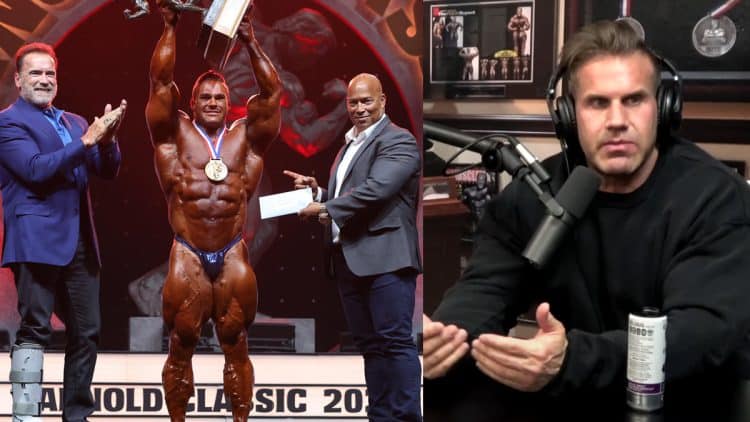 Four-time Mr. Olympia winner Jay Cutler is surprised by the small lineup of talent expected to perform at the 2023 Arnold Classic. In a recent video uploaded on YouTube, Cutler shared his thoughts on the Open division with bodybuilding coach Milos Sarcev seven weeks out from the contest.

The 2023 Arnold Sports Festival is set to take place Mar. 2-5 at the Greater Columbus Convention Center, Ohio Expo Center. Since its inception in 1989, the contest has turned into the second most prestigious bodybuilding event after Joe Weider’s annual Olympia Fitness and Performance Weekend.

However, things appear to have changed significantly. The organizers announced the tentative lineups of each division for the nearing contest last week. It appears the 2022 Arnold Classic champion Brandon Curry won’t compete at the upcoming show, leaving the door open for a new champion to emerge.

Two-time 212 Olympia winner Shaun Clarida and former 212 Olympia champ Kamal Elgargni joined the roster for the Open division. Samson Dauda and William Bonac will also be in attendance. When discussing the Dauda showdown, Shaun Clarida said he’s looking forward to that call-out and hinted that he’d have to out-pose Samson on the Arnold stage.

Coming off an uneventful showing at the 2022 Mr. Olympia, Blessing chose to pull out of the competition to give his body time to rest and recover. Many were surprised by Blessing’s decision since the lineup featured less than 10 competitors.

Cutler: “We have the list that came out. Very disappointed. I thought about jumping in by the way. We have six people registered right now.”

Sarcev: “Very disappointing, almost unthinkable for me. The question is how is this even possible that only six people are interested in entering the second biggest contest in the world… How can you miss that contest? I’m puzzled.”

Cutler: “I competed in the era where the Mr. Olympia was paying 100 or 110 grand and then it went up to 200. But the Arnold wasn’t even in my mindset to compete in after getting second at the Olympia until Jim Lorimer called me. He called me and said, ‘we’d really like you in the Arnold Classic.’”

#flashbackfriday to 2002 and Jay Cutler winning his first of three Arnold Classic titles!

Tickets for the 2022 Arnold Classic are ON SALE NOW! Visit https://t.co/oPcdY73AW4 to get your tickets TODAY!#asf2022 #arnoldclassic

Arnold Classic provides a major platform for rising bodybuilders to build up their name. Bodybuilding icon Jay Cutler rose to prominence through the competition before securing his first Olympia win. As a three-time Arnold Classic winner, Cutler credits the show for his massive popularity.

“I never regretted it because I made so much money guest appearing,” added Cutler. “I got second at the Olympia then a few months later went to the Arnold and was like the biggest thing in the books at the time. I had all the endorsement deals at the time and it was just a huge opportunity for me. It really opened up a ton of doors. The respect factor went through the roof. I was known as the best guy besides Ronnie Coleman.

Sarcev said, “You were choosing Arnold Classic three years in a row because it’s a prestigious contest. Kevin, Flex, Dexter all won so many times. This is the most prestigious contest, so much money, and they treat you amazing. It’s wonderful. I have nothing but praises to say. How can somebody not want to do that I don’t know honestly. When we get to the list of eight people, I wondered how many of the eight people are going to cancel because last year three guys canceled. Now, it’s the same thing but I didn’t expect to be this quick and didn’t know how they made the list.

Former Olympia champion Samir Bannout shared a similar sentiment about the lackluster lineup for the 2023 Arnold Classic. Bannout even joked about entering the contest himself because of the low number of participants. He suggested Derek Lunsford and Hunter Labrada join the show.

Bodybuilding legend Arnold Schwarzenegger announced the organization’s decision to increase the payout for the Men’s Open division winner to a record $300,000. Hopefully, the higher prize money will bring in even more talent in the coming days.