Slovakia's Michal Krizo continues to make gains for his IFBB Pro debut at the 2022 EVLS Prague Pro this weekend. 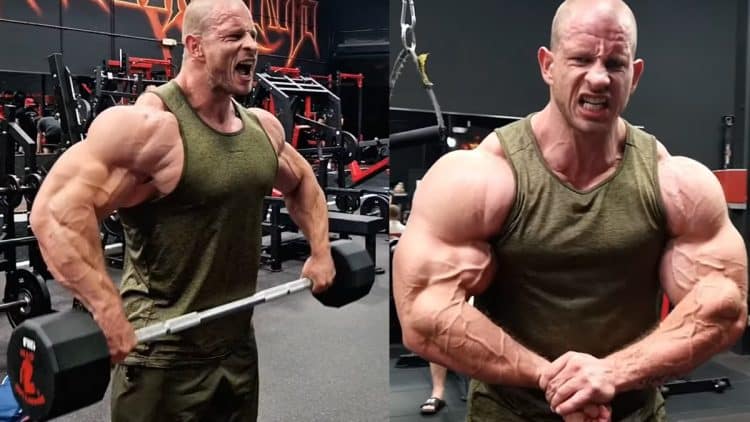 Michal Krizo‘s campaign for 2022 Mr. Olympia will continue this weekend. Before taking his talents to the 2022 EVLS Prague Pro, Krizo taxed his body with a brutal shoulder and triceps workout.

Slovakia’s Michal Krizo began his quest to compete on the Mr. Olympia stage when he switched from the IFBB Elite Pro League to the NPC earlier this year. He traveled to America and visited the sport’s east coast mecca, the Bev Francis Powerhouse Gym, in Syosset, New York. From there, he made his way to the Dragon’s Lair in Las Vegas, Nevada, where he impressed veteran/coach Milos Sarcev.

After connecting with Jay Cutler on the west coast, the four-time Mr. Olympia and Sarcev agreed that Krizo’s potential in the league was promising. Cutler went far enough as to compare Krizo’s muscle fibers to bodybuilding legend Phil Heath.

Krizo has been busy lately. He competed at the 2022 Amateur Olympia Italy contest a few weeks ago. He routinely shared the workouts he used to prepare for the show. While some questioned his conditioning, the 32-year-old won the contest and collected his Pro card.

Michal is once again visiting America and stopped by Dennis Wolf’s gym before finishing his workout at the Dragon’s Lair. Preparations are heating up as he dials in his physique for this weekend’s 2022 EVLS Prague Pro, which takes place tomorrow, Oct. 29, 2022, in Prague, Czech Republic.

You can find the exercises Krizo used below.

Many are excited to see Krizo back on stage this weekend. The mass monster was welcomed to the ‘ass whooping league‘ by Blessing Awodibu after earning his Pro card recently. The two Open class standouts actually have a history. In 2017, both men pushed each other in an amateur bodybuilding contest. It ended with Awodibu winning but Krizo is confident he’s surpassed Blessing at this point.

Krizo’s coach shared his recent progress for the upcoming Prague Pro, where his pupil looks more shredded than ever. Compared to Krizo’s look in Italy a few weeks ago, it’s evident he’s brought up the conditioning in his legs and midsection dramatically.

The last time we heard from Krizo a week ago, he shared an intense chest workout. He continues to make improvements and figureheads of the sport have taken notice of his crazy physique.

Former 1983 Mr. Olympia Samir Bannout believes Krizo has better arms and v-taper than Nick Walker. Moreover, the bodybuilding veteran predicted if Krizo comes in with the proper conditioning, he will win the 2022 Mr. Olympia contest on his first try.

Judging by the intense nature of his latest training session, Krizo intends to make a statement at the upcoming Prague Pro. For an athlete to earn a Pro card and an Olympia qualification within the same month would be nothing short of extraordinary.