"The Mind" gave his thoughts on some of the sport's hottest rookies and who might be a threat to Big Ramy's title. 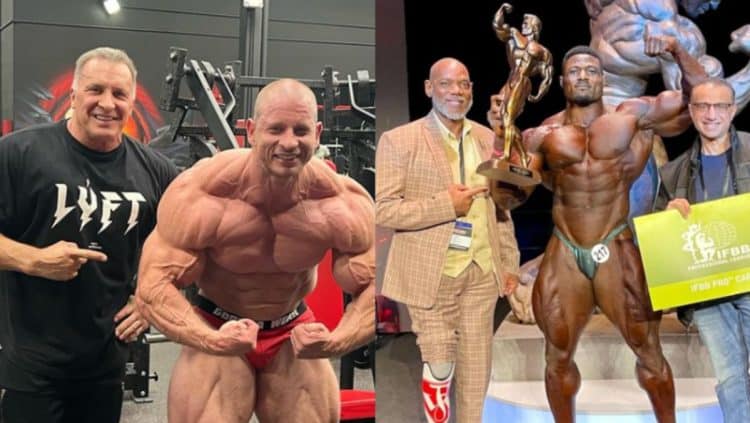 Milos Sarcev has coached some of the best bodybuilders to ever take part in the IFBB Pro League. In a recent video, Sarcev discussed Michal Krizo’s potential before naming Andrew Jacked as an ‘immediate’ threat to the Men’s Open Olympia title.

The Open class has arguably never been more exciting. Rookies and rising bodybuilders continue to emerge from around the world. One of the latest is Slovakia’s Michal Krizo. His switch from the IFBB Elite Pro League to the NPC was welcomed by fans and some veterans of the sport.

Upon signing with the NPC, Krizo visited Milos Sarcev at the Dragon’s Lair gym, in Las Vegas, Nevada. Milos was astonished by Krizo’s massive frame and fullness while getting a first impression. Sarcev believes Krizo plans to have a huge impact on his new league and predicted that he will be a problem for many other Open class athletes.

Another surging Men’s Open bodybuilder is Andrew Jacked. Trained by Flex Wheeler, Jacked earned his Pro card earlier this year. His aesthetics, slim waist, and even proportions guided him to the 2022 Texas Pro stage. After a battle with third place Steve Kuclo and runner-up Martin Fitzwater, Andrew Jacked won his Pro debut. With Mr. Olympia 15 weeks away, Milos Sarcev discussed who he believes will make the bigger impact this winter.

Milos Sarcev on Michal Krizo: ‘If He Improves His Back, He Will be a Top Olympia Competitor’

“He posed for me at the Dragon’s Lair,” Milos said. “Those arms… are the most incredible arms I’ve ever seen. That front double biceps, Jesus, right. Then, the side chest and the shoulders and arms, thickly chest — even though I said before he can still improve the chest to get a little bit more rounder.”

According to Sarcev, if Michal wants to be in the top six at Olympia, his back will need improvements. In addition, Milos believes Krizo’s physique would benefit from more width and a thicker upper body.

“He has great legs. Quadriceps separation – very deep. Quality you can see,” Milos added. “A complete package. The only thing that I think maybe hold him at this point would be that back. I’m sure a lot of people are talking about it. He still doesn’t have that width of some of the guys. Some of the guys, they really have that great v-taper. I think that will be apparent in the direct comparisons.

And for that reason and that reason only, would he be able to make top six in the first outing — if he improves the back to the point that he’s a little bit wider and a little bit more defined and thicker upstairs. He does need this to be a top Olympia competitor. Everything else is there already,” says Sarcev.

“Jay Cutler realized when he was posing with him at Venice Gold’s that he has such a quality fibrotic tissue — that is missing nowadays. There’s not too many guys that has that,” Milos added. “He’s definitely not elite IFBB second rank, he was the top champion from there, realizing that that ‘if I really want to compete with the best, I have to come to the IFBB Pro League and challenge myself.'”

Milos Sarcev explained what head judge Steve Weinberger’s impression of Andrew Jacked was when he posed at the Dragon’s Lair Gym.

“Steve was impressed. If you impress big Steve, you have the tools. Flex Wheeler is his coach and George Farah is his nutritionist. I don’t know how they arranged that, but yeah they are both involved. But Flex Wheeler… Andrew can do what Flex did back in 93 when he turned pro. He entered four shows before the Olympia and won all of them and then he was going to Olympia as the favorite. He was one of the favorites to win, and he placed second to Dorian [Yates].”

Despite his rookie status, Milos Sarcev believes Andrew Jacked is a top contender for this year’s Mr. Olympia contest. He added that conditioning should be his main concern.

“I think Andrew actually has that potential. I mean seriously. People say, ‘yeah he’s a rookie, you need to pay your dues, you have to be seen and do certain things,’ he was such a standout at the Texas Pro. You’ve seen it, with structure, with muscle quality, with the v-taper, with the depth of his super flat abs and stomach.

The flaring quads. There’s nothing missing already. If he gets conditioned out of his mind — he was 290 right? how much bigger do you need to be? He’s immediately a top contender. This is what I keep saying: this is Mr. Olympia and this time I think the top 15 is going to be absolutely ridiculous. Like in 99, I was talking to Jay, he placed 15th out of 16 people at Mr. Olympia — and Jay was in ridiculous condition, ripped to pieces. But in this kind of lineup, somebody needs to be last.”

Cutler also had high praise for Andrew. He compared his back to reigning Mr. Olympia champion Big Ramy’s.

Given the lineup of talent expected for this year’s Olympia show, Milos doesn’t see a lot of changes at the top of the Men’s Open division. With Hunter Labrada and Nick Walker gunning for first place, making the first call out will be a challenging task.

Milos added that he thinks this year’s second call out will be overflowing with talent.

As of this writing, Andrew Jacked’s plan is to compete at the upcoming Arnold Sports UK contest, however, the hope is that Visa issues won’t interfere with his ability to participate. Meanwhile, Krizo intends to earn his pro card at the 2022 Amateur Olympia Italy contest and then attempt to punch his ticket to Olympia with a victory at the Prague Pro in late October.

Sarcev believes 2022 Mr. Olympia will be one of the most competitive show’s ever since there will be around 10 bodybuilders who can defeat each other on any given day. While he acknowledges that Krizo and Jacked have some improvements to make, he doesn’t believe they are far off from contending with the best.

Average Chest Size For Men & How to Measure Your Chest