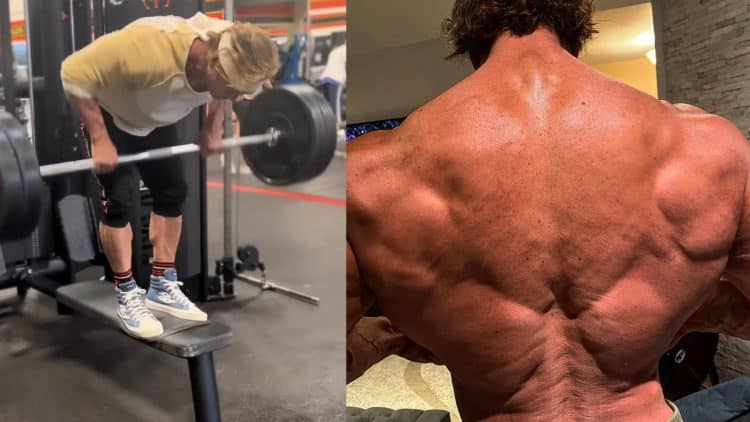 Mike O’Hearn recently shared an old-school workout from the 1980’s era of bodybuilding. Known for his proclamation of never using any PEDs throughout his life, O’Hearn has explored martial arts, bodybuilding, powerlifting, acting, and modeling in his career that spans more than 30 years. At 53 years of age, O’Hearn carries an aesthetically pleasing and muscular physique that has led to many people questioning his claims of being all-natural. However, he has never tested positive for any substances and presented his case in a graceful manner whenever questioned about it.

Having trained for a fairly long duration of time, Mike O’Hearn has witnessed the changes the bodybuilding and fitness industry has gone through over the last few decades. As of lately, he has been sharing old-school training techniques with his fans through his YouTube channel. A few weeks ago, Mike O’Hearn and Robby Robinson shared ‘Old School’ biceps training tips. Mike O’Hearn recently posted an old-school back exercise from the 80s on his YouTube channel.

Some of the most iconic names in the sport of bodybuilding dominated the scene around the 1980s. They include Arnold Schwarzenegger, Lee Haney, Franco Columbu and Tom Platz to name a few. While many bodybuilding enthusiasts find the era absolutely nostalgic and iconic, few are acquainted with the training methods of the time and what it was like to train in those days. So without any further delay, let’s jump right into Mike O’Hearn’s ‘Old School’ back exercise.

The back workout consisted of deadlifts followed by bent-over barbell rows off a bench. Mike O’Hearn is not a spring chicken by any means. He admitted that at his age, it is difficult to get the deadlifts in before doing the rows. However, he advised the younger audience to do the deadlifts before the rows.

Mike O’Hearn started the video by giving a background of the workout and said:

While bent-over barbell rows off a bench come across as an advanced method of training, the Natty bodybuilder assured that even the beginners can absolutely perform it. Performing bent-over rows while standing on a bench obviously allows one to achieve a greater range of motion as the ground on either side of the bench is much lower. As a result, the movement gives a far greater stretch in the back muscles.

“Arnold Schwarzenegger would love that range of motion. I think it’s one of the reasons why he’s still here today,” Mike O’Hearn added.

Standing on the bench limits the foot placement area. Therefore, the overall form of this movement can seem to be a little awkward as compared to doing bent-over rows on the floor.

Mike O’Hearn elaborated further on the pros of doing bent-over rows off a bench. For him, all the aspects of the exercises have to be measurable. This movement in particular is a great guage to determine fitness level and progress as it provides a better range of motion and it is harder to perform compared to the regular bent-over rows.

Mike O’Hearn elaborates on the 80’s Era of bodybuilding

After getting the first set in, Mike O’Hearn was asked to share his thoughts on how it felt to perform this workout that he did when he was still a young adult/teenager.

“It just reminds me of the 80s and that type of training. It also shows me two things: One is how balanced we were back then, the range of motion we did back then. Sometimes you go away from the exercise for a week, that turns into a month, turns into a year… five years, ten years. And you’re like, ‘Holy sh#@. I just thought I was going to stop for a second…” Mike O’Hearn responded.

1979 Mr. California winner Larry Jackson is one of the best representatives of the ‘80s era of bodybuilding. Coincidentally, he trains at the same gym as Mike O’Hearn. He shared his own perspective on how the times have changed in the bodybuilding world. Larry Jackson said:

“Today, it’s a whole lot better now. There’s so much energy in this gym and when people come here, they always come back. Back in the day it was mostly all males here. But now it’s male and female. It’s so much better that way.”

Courtesy of Mike O’Hearn’s YouTube channel, you can watch the full video here:

Golden Era bodybuilder Arnold Schwarzenegger was highly respected for his balanced proportions and aesthetic physique. With the rising popularity of...

If anyone is drinking from the fountain of youth, certainly Mike O'Hearn is one of the leading candidates. In a...

Joe Rogan is known for his podcasting empire and brings unique insight when discussing sports. In a recent video, Rogan...