Truscott wins her second Fitness Olympia title at the 58th edition of the Olympia. 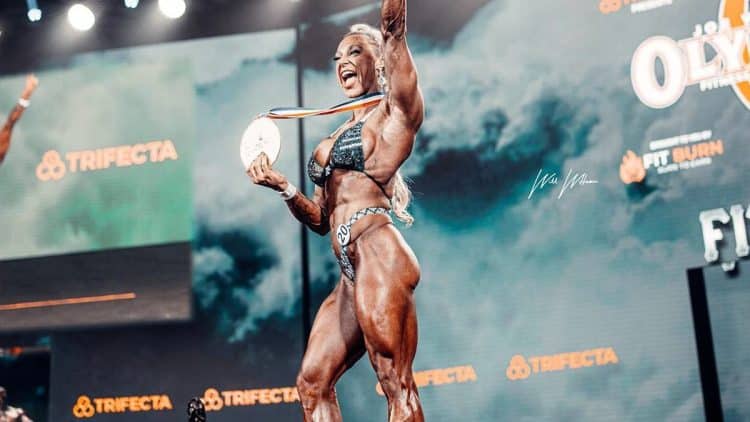 The reigning Fitness Olympia champ Whitney Jones shocked the bodybuilding community by withdrawing from the Olympia a day before stepping on stage due to undisclosed health concerns. However, it was not the end of disappointing news from the Fitness division. Four-time Fitness Olympia champ Oksana Grishina pulled her name from the contest before stepping on stage due to a calf injury.

The 2022 AC Fitness International champ Ariel Khadr was also a frontrunner for the Olympia trophy. However, the 2021 Fitness Olympia fifth-place finisher Jaclyn Baker surprised everyone by being in the final callout with Truscott and matching her pose for a pose. Khadr finished fourth at the 2021 Olympia, while Baker placed fifth behind the 2022 AC champ.

Many bodybuilding fans believe the Fitness division is the most exciting contest at the Olympia Weekend. The Fitness routine adds a lot of entertainment value to the competition.

Fitness content consists of two rounds — a posing round where the contestants perform quarter turns in bikinis and a dance-style Fitness routine that should include push-ups, high kicks, straddle holds, and side splits. The dance routine is a mix of hip-hop dancing, gymnastics, posing, calisthenics, tumbling, cheerleading, and overall stage presence.

There were eight debutants at the 2022 Fitness Olympia. The new blood brought the heat and pushed their more experienced counterparts to bring their best to the stage.

Baker’s routine was neat, flowing, and beautifully choreographed. Ariel Khadr brought back the Terminator routine from the 2022 Arnold Classic. However, it wasn’t enough to fend off Truscott who nailed the fitness dance routine with her shark-themed routine.

Truscott knocked the socks off everyone when she came out wearing a shark costume and a shark mask. The former Fitness Olympia champ’s powerful routine launched her into the stratosphere.

The fitness dancing routine has a two-thirds weightage in the final results. Thanks to her great routine, Truscott separated herself from the pack, and there was no touching her.

Truscott’s victory at the 2022 Olympia makes her the fourth Fitness Olympia champ to regain the title after losing it.