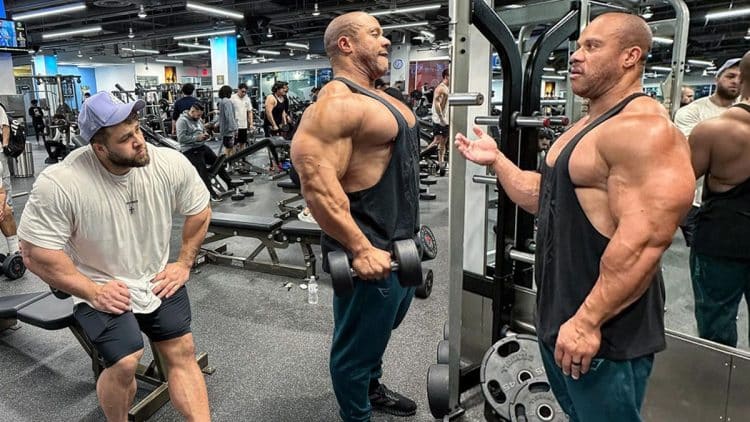 Bodybuilding legend Phil Heath moved on from professional competition a while back but has not lost his impressive physique. In a recent post made on Instagram, bodybuilder Regan Grimes teased Heath’s potential comeback at the 2023 Arnold Classic.

Phil Heath gained attention for his massive muscle size and impressive conditioning that separated him from other competitors. He turned in an impressive showing at the 2008 IFBB Iron Man to win the show and secure an invite to the Olympia, where he became the first rookie to crack the top three since Flex Wheeler in 1993.

Heath was renowned for the 3D look of his delts and the aesthetic shape of his muscles. He finally secured his maiden Sandow trophy in 2011 by dethroning bodybuilding icon Jay Cutler. ‘The Gift’ proved to be a dominant champion as he racked up an insane six title defenses, winning a total of seven Mr. Olympia contests, the joint-second highest (with Arnold Schwarzenegger) of any athlete in the history of the competition.

His final appearance came at the 2020 Mr. Olympia, where he finished third. He took to the sidelines following the performance and has not competed since. Although he didn’t officially announce his retirement, reports suggested Heath had hung up his posing trunks.

Heath teased a potential return to the bodybuilding stages last August. He shared a gigantic physique update stating he was only getting started. The update got many fans excited at the idea of seeing Heath battle it out with the modern-day mass monsters of the Open class. He followed up with another insane teaser showing off his Olympia-worthy build while indicating plans for his return.

Earlier this month, Heath confirmed he was weighing his options in hopes of a comeback. It appeared he was waiting to see how he looked after taking the time to train and eat right before making a concrete decision.

Will Phil Heath make his comeback at the 2023 Arnold Classic?

In a recent Instagram post, bodybuilder Regan Grimes teased the potential return of Phil Heath at the upcoming 2023 Arnold Classic, scheduled for Mar. 2-5 in Columbus, Ohio.

The organizers of the nearing Arnold Sports Festival announced the full lineup last week. Former Mr. Olympia winner Samir Bannout was left unimpressed with the lack of elite contenders on the roster of eight men, out of which two ended up withdrawing days after the reveal. Four-time Olympia champion Jay Cutler expressed his disapproval of the top prospects skipping the show as well.

Men’s Open competitors will have the chance to win the record payout of $300,000, the highest in the competition’s history, for the top prize. Although he was initially against the idea, Nick Walker got confirmed to compete at the 2023 Arnold Classic, as did Andrew Jacked and Patrick Moore.

If Phil Heath does decide to return, it will certainly bring a lot more eyeballs and add a ton of excitement to the contest.

What To Mix With Protein Powder — 26 Delicious Options