Regan Grimes Out of 2022 Olympia, Tells Jay Cutler: ‘It’s Time to Take the Year Off and Continue Adding Muscle’

Regan Grimes officially announced he's out of 2022 Mr. Olympia with plans of adding 15 pounds of muscle to his physique. 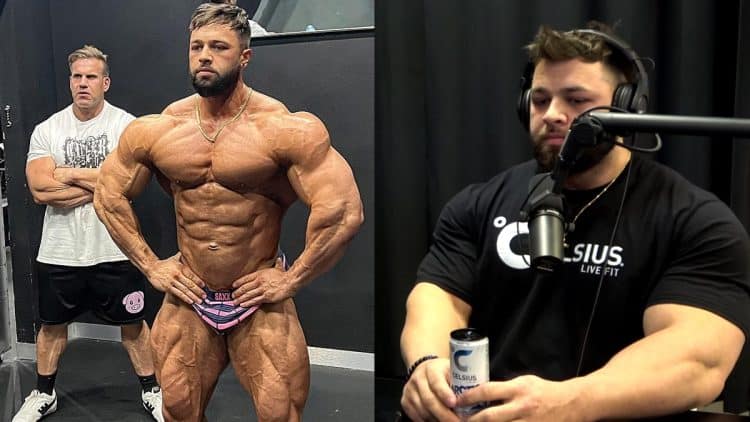 In March, bodybuilder Regan Grimes announced that he would stop competing at contests until this year’s Olympia contest, but his plans have officially changed. In a recent episode of Cutler Cast, Grimes, joined by his coach, Milos Sarcev, shared that he will not compete at 2022 Mr. Olympia with the intention of returning next year with added size.

Canada’s Regan Grimes has made an impact in the Men’s Open division with a blend of size, aesthetics, and balanced proportions. While he placed 15th at last year’s Mr. Olympia contest, he left a lasting impression with fans, nonetheless.

Weeks after competing at bodybuilding’s biggest show of the year, Grimes presented an improved package at the 2021 Legion Sports Fest Pro event but was tasked with facing 212 Olympia champion Shaun Clarida, who won the contest.

Undeterred from his runner-up finish, Grimes took his talents to the 2021 Egypt KO Pro show, where he walked away in first place. While this victory earned Grimes an invitation to 2022 Mr. Olympia, it appears the Open standout won’t be using it. And perhaps his pair of seventh-place finishes at the 2022 Arnold Classic and Boston Pro factored into the recent decision.

Regan Grimes issued a statement explaining why he has decided to forgo the 2022 Olympia contest to continue adding tissue to his physique.

“We did the Arnold’s, but unfortunately, I got sick halfway through. We were going to keep pushing and hoped the body would start responding. After [the] Arnold, Boston [Pro] and Reno, we had a 12-week and 12-week break, and then 24 weeks out from the Olympia, we started discussing something and [made the decision] around 13-14 weeks out.

I’m 14 weeks out from the Olympia and I need to put on 15 pounds of muscle to compete. I’ve been competing for the last 10 years and I think this is the time to take a year off. We’ve decided to take it off this year and continue putting tissue on and we’ll hit a show next year and go to Olympia,” says Regan Grimes.

As far as Sarcev is concerned, Grimes has the edge against top bodybuilders in terms of symmetry, balance, and shape. Despite those advantages, Sarcev understands the importance of size in a muscle contest like Mr. Olympia.

”I’m going to say it for me. He blows them out of the water as far as symmetry, balance and shape, but they’re still going to beat him in this mass department,” Milos Sarcev suggested. “Nowadays you have to have size to compete with Big Ramy.”

Upon hearing Grimes’ new bodybuilding plan, Cutler gave him advice and shared how important it is for an athlete to possess authentic confidence in his/her own abilities.

“You’re considered a top-level guy. Just like Shawn Rhoden and Phil Heath, you have to believe that you’re going to be the best if you want to get in the top position. You have to work on your vision and your mental game.

You don’t have to make the announcement now, but you need to start visualizing that you can be the best and stand next to the best and be a hundred percent. Sit at 294 or 300 pounds for the next six plus months,” Cutler told Grimes.

“The Mind” believes with added size, Regan’s aesthetics would carry him to victory on some of the sport’s biggest stages.

“Aesthetics, structure, shoulders, glutes, hamstrings, chest, deeper abs, peeking biceps — you have the best Aesthetics in the goddamn whole open division, Sarcev shared. “Fill it up with a high-quality muscle and it’s gonna be very hard to beat. Regan’s mentality when it came to the Olympia was to crack top six and then use the time to grow and deliver something like Jay did in 2001.”

Cutler examined the Open class and doesn’t see anyone standing in Ramy’s way at 2022 Mr. Olympia.

“Looking at the field this year, I think Big Ramy is going to win the Olympia. I can’t see anyone challenging him, and he’s in such good shape,” says Cutler. “Milos believes in [Regan Grimes] and wants him to compete in the Mr. Olympia contest, but sometimes you have to take a step back in order to take two steps ahead.”

Even though Grimes will be taking the year off to build his physique, he mentioned that he plans to share his training sessions on YouTube weekly. Some in the community were surprised by Grimes’ decision given the improvements he’s made to his physique, which were on full display in an update where he pushed the scales at almost 300 pounds.

He will finish this season on the sidelines, but he hasn’t slowed down in the gym. Regan Grimes is out of 2022 Mr. Olympia and intends to return to next year’s show with added muscle mass.