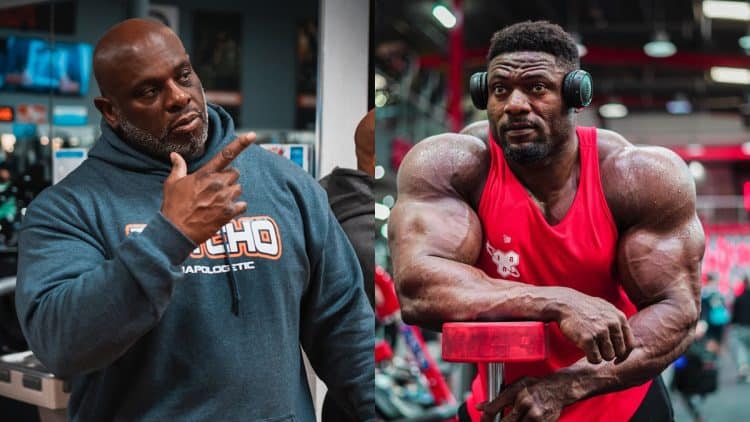 Chinedu Andrew ‘Jacked’ Obiekea is turning up the intensity of his preparations for March. In a recent podcast, Dave Palumbo revealed Jacked is being trained by the late Shawn Rhoden‘s former coach Chris ‘Psycho’ Lewis for the upcoming 2023 Arnold Classic.

Jacked dominated the bodybuilding calendar last year, having competed at a total of four shows. First, the Nigerian native earned his pro card at the 2022 Arnold Classic Amateur under the tutelage of bodybuilding legend Flex Wheeler and guru George Farah.

Jacked competed at his first IFBB Pro show last August, where he took first place at the 2022 Texas Pro. His combination of mass, aesthetics, and shape shined the moment he stepped on stage. En route to earning gold, Andrew defeated contenders Steve Kuclo and Martin Fitzwater. In Europe, at the Arnold Classic UK, Andrew claimed victory yet again after out-performing James Hollingshead and Patrick Johnson.

Capping off the 2022 season, Jacked debuted at his first Mr. Olympia competition. While he was forced to grapple with a fever on stage, the bodybuilder still managed to turn in an eighth-place finish. After the Arnold Sports Festival increased the first-place Open prize money to $300,000, Jacked and Patrick Moore announced their entries.

Veterans like Jay Cutler believe Jacked is a future Mr. Olympia titleholder, assuming he brings up his back. And now, after joining Chris ‘Psycho’ Lewis for his 2023 Arnold prep, Andrew is one step closer to securing the second-most coveted title in bodybuilding.

According to Dave Palumbo of Rx Muscle, Chris Lewis told him he would be helping Jacked ahead of his first show of 2023. Lewis helped train the late Shawn Rhoden to success in 2018 when he won his lone Mr. Olympia title, defeating the long-standing seven-time champ Phil Heath.

Chris Lewis was taught by bodybuilding guru and trainer Charles Glass. While they split up years ago, Lewis is known for applying many of Glass’ principles to bodybuilders in various IFBB divisions.

“Now, I have some insight into — obviously, George [Farah] is doing his [Andrew Jacked] diet. I got word from Chris ‘Psycho’ Lewis, I don’t know if I’m supposed to say this, but it’s too late. You tell me, and you don’t tell me it’s off the record, then I have to open my mouth.

Chris ‘Psycho’ Lewis is going to be training Andrew Jacked for the next six weeks or five weeks or whatever it is for the [2023] Arnold. We know that he did wonders with Shawn Rhoden keeping him focused and getting him into that gym,” Dave Palumbo said.

Veteran coach Chris Aceto said the recent acquisition of Lewis is a ‘game-changer’ for Jacked.

I think it’s a game-changer because I remember seeing a picture of Andrew Jacked, I think he was in Flex Lewis‘ gym. It was before he had competed in one of the shows that he won. And he looked good, you know what I mean. But you take a real real real look, you might say, God, he might be way better than he actually looks here because he’s very in proportions.”

Aceto added that Jacked weighed more than Rhoden back when Lewis was helping him prepare for Olympia.

“The flip side to that is Andrew Jacked — body weight wise is a big weight, where Shawn [Rhoden] really wasn’t.”

King Kamali (Shahriar Kamali) discussed Andrew Jacked’s potential at the upcoming 2023 Arnold after he threw his name into the hat last week. Even though Nick Walker will be competing in Ohio, Kamali suggested Andrew was his kryptonite because he has freak factor and shape.

In less than seven weeks, Jacked will face a number of top bodybuilders in Ohio. Patrick Moore will make his return after taking the 2022 season off due to injury. Meanwhile, Samson Dauda, Shaun Clarida, and William Bonac will also vie for gold after competing in Las Vegas at Olympia last month.