Krizo goes through a demanding back workout as the 2022 Olympia draws closer by the day. 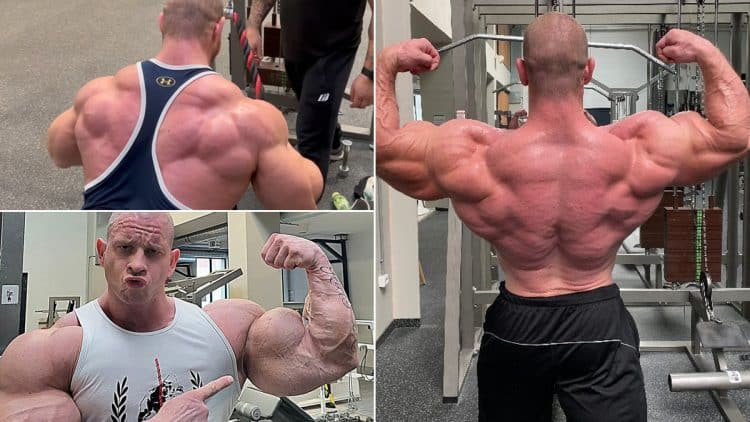 Michal Krizo is ready to upset the established names at the 2022 Olympia. Krizo is a Slovakian professional bodybuilder who initially gained popularity as an IFBB Elite Pro League competitor. However, the 32-year-old announced his transition to the NPC league earlier this year to kick off his Olympia campaign. The wheels were set in motion for Krizo to become one of the most exciting competitors when he dismantled the competition at the 2022 Amateur Olympia Italy and earned his IFBB Pro card.

A few weeks later, he made his pro debut at the 2022 EVLS Prague Pro and emerged victorious again. The win earned him a direct qualification for the 2022 Olympia, where he will bet on himself to prevail against some of the most elite bodybuilders.

In a relatively short time since this transition, Krizo has garnered a lot of attention from fans and bodybuilding veterans like Samir Bannout. The Slovak has also developed fierce rivalries with his contemporaries. Old rivals Blessing Awodibu and Krizo have been firing shots at each other. Recently, Krizo engaged in a social media altercation with Iain Valliere and promised to show the latter ‘what bodybuilding is’ at the 2022 Olympia.

Krizo did not waste any time in enjoying his first win as a pro and went back to work right away. Although he has looked massive and stage-ready in recent physique updates, the 32-year-old is showing no signs of slowing down his competition prep. Five weeks out of Olympia, the 2022 Prague Pro winner went through an exhausting back workout. The video of this session was uploaded on his YouTube channel. So without further delay, let’s take a closer look at the detailed account of this session.

Michal Krizo smashes a back workout

Krizo started the workout with this bodyweight movement to work his back. Pull-ups are one of the simplest and most effective compound movements to build upper body muscles and pulling strength. After performing three sets of this exercise, Krizo took to the next movement.

While the latissimus dorsi is the primary target muscle of this exercise, the rhomboids (upper back muscles) also get stimulation due to the close grip. Additionally, this movement activates the biceps. Krizo did three sets of this exercise and took to a horizontal pulling movement next.

Vertical pulls like pull-ups and lat pulldowns give width to the back. On the other hand, horizontal pulls or rows are good for building back thickness. Hence, it is always advisable to include both types of pulling exercises in your routine for complete back development.

Krizo took to the close-grip seated rows next. This compound exercise works the latissimus dorsi, rhomboid, trapezius, and erector spinae muscles of the back. Seated rows are also a great way to improve your posture. Following a few solid sets of this movement, Krizo jumped into the next exercise.

Krizo next took to this exercise for working the back further. In addition to the lats, this movement works the majority of muscles in the upper back, including teres major, teres minor, rhomboids as well as pecs, deltoids, and biceps. The Slovak used a rope attachment on the cable machine for doing this exercise and cranked out a few good sets before jumping into the next one.

The towering Slovak next took to this upper posterior muscles exercise. Apart from developing the back, this exercise works the biceps brachii, brachialis, and brachioradialis muscles. It is a must-include exercise in your back training routine for the overall development of the pulling muscles in the body. Krizo did a few heavy sets of this movement with progressively heavier dumbbells and took to the finisher of the day.

The 2022 Prague Pro winner capped the training session with this exercise. Dumbbell pullovers are excellent at building the chest as well as the back. However, scapular stability is essential to prevent excessive protraction of the shoulders and ensure the shoulder joint functions optimally. Krizo did a few solid sets of this exercise using the progressive overload principle and called it a day.

Krizo is ‘a million percent’ confident that he will bring a much better physique at the 2022 Olympia than his package at the 2022 Prague Pro. However, the path ahead is a steep uphill climb as the Men’s Open division is filled to the brim with elite competitors.

While more experienced veterans like reigning champion Mamdouh ‘Big Ramy’ Elssbiay, Brandon Curry, and William Bonac still have a firm grip on the division, younger contenders like Nick Walker, Hunter Labrada, and Hadi Choopan have established themselves in the top five.

The addition of Andrew Jacked, Blessing Awodibu, and Michal Krizo has spiced up the division further. It will be a cut-throat competition for every bodybuilder trying to stake a claim at the top five spots at the 2022 Olympia, scheduled for Dec. 15-18 in Las Vegas, NV. Who will emerge on top? Only time will tell. Stay tuned with Fitness Volt for the 2022 Olympia updates.

You can watch the full workout video below, courtesy of Michal Krizo’s YouTube channel: