The NBA legend Shaq has dropped nearly 40 pounds and lit up the internet after hitting some classic bodybuilding poses. 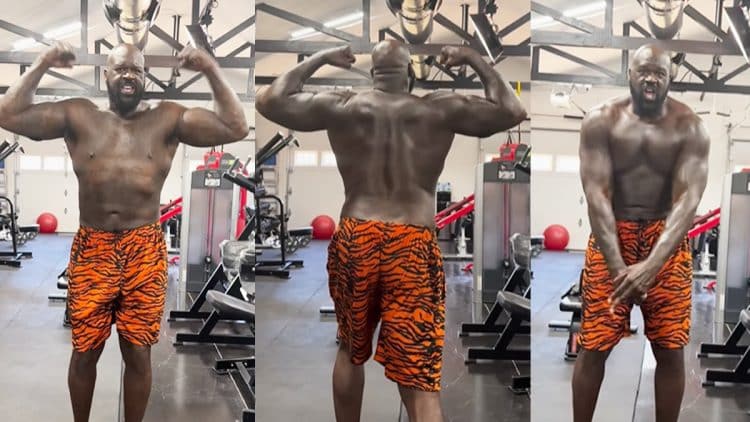 Shaquille O’Neal, well known as Shaq, underwent a dramatic physique transformation after losing nearly 40 pounds. In a recent post made to Instagram, Shaq teased competing in bodybuilding after hitting a number of iconic poses at the gym.

During his lengthy NBA tenure, O’Neal cemented himself as one of the greatest basketball players and centers of all time. He’s competed on six different teams, including the Los Angeles Lakers throughout his 19-year career and was crowned a four-time NBA champion back in his heyday.

His incredible accolades combined with his towering height turned him into an American icon. While he stepped away from the court professionally, Shaq is committed to staying in shape and maintaining an adequate level of fitness.

When the pandemic was at its height, Shaq bulked up to 401 pounds. After reaching that weight, he applied himself to an intense four-day per week training split to facilitate the weight loss journey to 365 pounds.

This training split featured sessions that involved combining 20 minutes of cardio and 40 minutes of strength training to maximize fat burning as well as muscle building. Initially, his goal was to post a picture of himself shirtless at 50, and it seems he’s accomplished that objective and then some.

O’Neal is a die-hard bodybuilding fan, who has taken interest in the sport over the last few years. In 2020, the New Jersey native helped promote 2020 Olympia — where he served as an honorary ambassador for bodybuilding’s most important event of the year.

In addition, the NBA staple was in attendance for the 2021 Arnold Classic contest, located in Columbus, Ohio. Along with getting to see world-class bodybuilders compete, Shaq had the honor of meeting seven-time Olympia winner and bodybuilding legend Arnold Schwarzenegger.

The two took a photo together, which many found comical due to the shocking height difference. Judging by his latest pose-down on social media, it appears Shaq’s body transformation may guide him to a bodybuilding stage one day.

Even though most bodybuilders are under six feet tall, some fans refuse to count out Shaq given his athletic history and love for the sport. In response to his posing video, bodybuilders flocked to the comment section to show their appreciation for Shaq’s latest endeavor.

The last time fans heard from Shaq he was reflecting on his body transformation. He joined Logan Paul on the Impaulsive podcast to discuss his weight loss goal. Shaq revealed that he’s targeting a weight of 345 pounds in the coming months. While he didn’t expect his physique to go viral last time, Shaq says his end goal is to become a sex symbol with ‘muscles everywhere.’

O’Neal isn’t the only athlete around his fifties eager for a physique transformation. A slew of bodybuilders hopped on board with the trend too. Veterans Lee Priest, Kevin Levrone, and four-time Mr. Olympia Jay Cutler have all committed to transformations over the next several months.

It remains unclear if the basketball legend will ever throw on a pair of posing trunks, but his transformation has the world excited about what’s next. Regardless of what’s on his agenda, it’s evident that Shaq appreciates bodybuilding after seeing the depth of his latest posing routine.