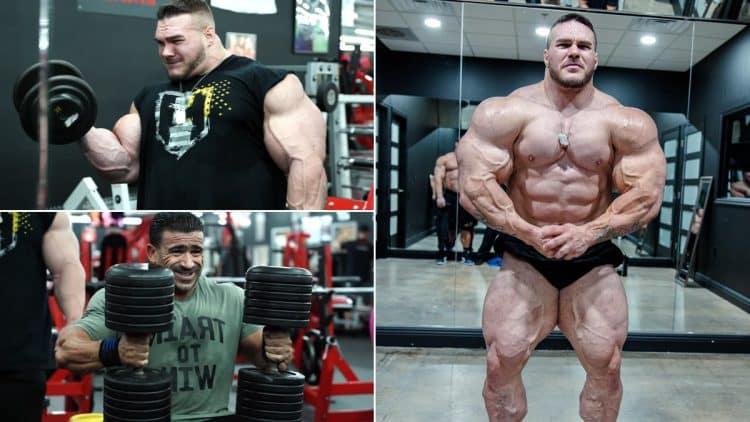 As the old saying goes – If you want to walk fast, walk alone but if you want to walk far, walk together. Bodybuilders Nick Walker and Kamal Elgargni seem to follow the same principle as they prepare for the 2022 Olympia. Nick Walker is an American professional bodybuilder that competes in the Open division of the IFBB Pro League. His rise to prominence was fueled by winning the 2021 New York Pro and the 2021 Arnold Classic within one year of earning the IFBB Pro card.

The NY Pro win earned Walker his maiden direct qualification to the 2021 Olympia where he finished fifth. The 28-year-old will attempt to improve his standing further when Olympia returns to Las Vegas from Dec. 15 to 18.

Libyan-British bodybuilder Kamal Elgargni is one of the foremost competitors in the division. In 2018 he went on to win the Arnold Classic in the 212 division and scored third placing at Olympia the same year. Meanwhile, in 2019 he was awarded the prestigious Olympia title. Elgargni made a foray into the Open division in 2022 and competed at the 2022 Tampa Pro and the 2022 Texas Pro, finishing second and fourth, respectively.

Elgargni and Walker have begun their preparations for the 2022 Olympia. They trained their chest and biceps at Advanced Fitness gym in Tampa, Florida ahead of their competition. Without further ado, let’s examine the details of this training session.

Walker and Elgargni started the training session with this compound movement. The Pectoralis major muscle comprises the clavicular and sternal heads (the upper and lower pec). Incline bench press works the sternal head of the pecs and helps develop the upper part of the chest. The duo applied the progressive overload principle to this exercise and performed the sets with incrementally heavier loads. While Walker did the first set with two plates and worked his way up to three and a half plates, Elgargni started with one and a half plates and used two and a half plates for the top set.

The bodybuilder duo next took to free weights and did Dumbbell bench press. With proper form, this exercise activates the pectoralis major, triceps as well as anterior deltoid muscles in the upper body. Once again, Walker and Elgargni applied progressive overload principle to this exercise and cranked out some heavy sets before moving on to the next exercise.

Walker and Elgargni went back to working with the machine and targeted the sternal head of the pectoralis major muscles with this isolation movement. They performed a few sets with slow and controlled motion and took to a superset to work the pushing muscles next.

The bodybuilder duo started the biceps workout with Machine Preacher Curls. This is one of the most effective exercises to isolate the biceps as the shoulders are locked in and triceps firmly rest against a pad during the movement. This form does not allow any of these muscles to compensate or take over the movement from biceps. Walker and Elgargni performed a few sets of this exercise and wrapped up the training session with some sets of standard dumbbell curls.

Nick Walker and Kamal Elgargni are pushing each other every single day to make gains. Twelve weeks out of the Olympia, the duo look to be in the right stage of their training.

With a never-ending list of top competitors in the Open division, Nick Walker has to be on point when he steps on the stage on Dec. 15. On the other hand, Elgargni will have a fellow former champion, Shaun Clarida, as his main opponent after reigning Derek Lunsford‘s transition to the Open division.