Commemorating chronicles of the Figure division and celebrating its champions. 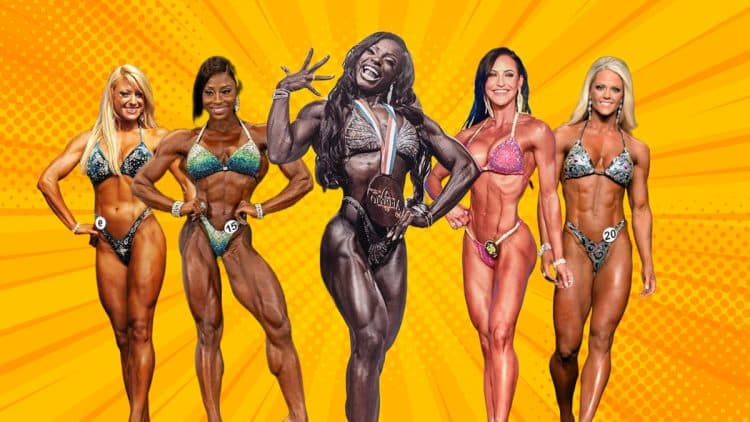 The Olympia is the most iconic bodybuilding show. Joe Weider’s Fitness and Performance Weekend, which hosts the Olympia showdown, today holds over 11 bodybuilding contests. However, it wasn’t always the case.

For female competitors, Ms. Olympia and Fitness Olympia were the only titles up for grabs until 2003, when the International Federation of Bodybuilding and Fitness (IFBB) introduced the Figure division.

Figure competitors are judged on their shape, balance, and symmetry. They focus on their back, shoulder, glutes, and hamstrings. Furthermore, deep musculature and striations are marked down in the division.

Davana Medina made history by winning the first Figure Olympia contest in 2003. After the debut season, participants got a better understanding of what the judges wanted.

The competition got more intense with each edition since 2003, with defending champion Cydney Gillon elevating the bar to a record high. In the 20 Figure Olympia contests so far, there have been seven champions. Gillon holds the record for the most wins with six consecutive titles under her belt. Nicole Wilkins and Erin Stern are the only two Figure Olympia champs to have reclaimed the title after losing it.

This article goes over the history of the Figure Olympia, notable moments, rivalries, and the seven champions who have held the throne over the past two decades.

Fans were excited to check out the lineup for the inaugural Figure Olympia in 2003. Meanwhile, promoters were eager to see how the new division would be received by the community. There was a lot of hype going into the 2003 Olympia. Ronnie Coleman won his sixth consecutive Mr. Olympia title at the show. Bodybuilding icon Arnold Schwarzenegger made a special guest appearance as well.

Davana Medina etched her name in the record books as the first Figure Olympia champion. She went into the contest with momentum behind her, having placed third at the Arnold Classic. Medina stood out as the clear winner with her impeccable symmetry and shape, overshadowing her competitors on stage.

Following the division’s overwhelmingly positive reception, it was clear Figure Olympia would become an integral part of the Olympia Weekend.

Jenny Lynn and Monica Brant were determined to challenge Medina the next year following their podium finishes. Although Medina faced serious heat from rivals, Lynn and Brant, she successfully defended her title and won the Figure Olympia crown for three consecutive years.

Having consistently finished in the top three in each of the last three editions, Lynn finally broke through the overhead ceiling to win her maiden Figure Olympia crown at the 2006 Olympia. She faced intense competition from rising prospect Amber Littlejohn and veteran Brant, who had also proven her consistency alongside Lynn. Lynn held on to the title for another year to bring her Figure Olympia trophy total to two.

As for Medina, the 2005 Olympia turned out to be the final appearance of her professional bodybuilding career as she retired from the sport after missing the 2006 IFBB Figure Olympia.

Lynn went into the 2008 contest as the favorite to win her third consecutive trophy. However, Lynn slipped out of the top three for the first time and finished fourth behind Jennifer Gates, Aliotti, who retained her runner-up place from last year, and Zivile Raudoniene.

At the 2008 Olympia, Gates emerged as the new victor of the Figure division. While she was in the top five in the previous edition, Gates’ significantly improved physique came as a positive surprise for many. Her hard work during the off-season helped her snag her maiden Olympia title.

Following her first Olympia win, Gates never returned to the Superbowl of bodybuilding.

The four years from 2009 to 2012 would mark one of the most exciting and competitive periods in Figure Olympia’s history. Nicole Wilkins became one of the first bonafide sensations of the Figure division after winning her first trophy at the 2009 Figure Olympia championship.

Wilkins missed the mark at the 2010 Figure Olympia, which made way for Erin Stern to earn her first Figure Olympia trophy in 2010. Wilkins came back stronger the following year to reclaim her title in 2011.

Stern edged out Wilkins another time to level the score. Wilkins went ahead of Stern with a total of four Figure Olympia wins.

In 2014, Nicole Wilkins managed to ward off budding prospect Candice Keene, who was getting closer to her on the podium with each season. She continued her dominant run with a win at the 2014 Olympia and became the first four-time winner of the Figure Olympia competitions.

Erin Stern defeated Wilkins to win her first Figure Olympia trophy in 2010. Although she never successfully defended the title, she managed to beat Wilkins a second time in 2012.

Stern and Wilkins pushed each other to the limits. Wilkins would reclaim the title at the 2011 Figure Olympia before Stern repeated history by dethroning her again in 2012. It marked one of the most memorable times in the division’s history, with both athletes battling it out for the top prize.

Stern would step away from the Figure Olympia competition with two titles under her belt. In 2021, Stern returned to the biggest stage in bodybuilding but as a Bikini competitor, where she placed 15th.

After a tough showdown against Keene in the previous season, Wilkins prepared to extend her lead as the winningest athlete by winning her fifth Figure Olympia trophy. However, veteran bodybuilder Latorya Watts emerged as the dark horse at the contest after placing fifth in her Olympia debut in 2014.

Watts turned out to be the athlete to finally knock Wilkins off her throne in a shocking upset at the 2015 Figure Olympia. Wilkins finished runner-up, while Lewis retained her third place.

Watts managed to defend her title and bagged her second Figure Olympia trophy in 2016. While she did not know it at the time, her victory over the promising Cydney Gillon would make her the only athlete in history to beat Wilkins and Gillon (the most and second-most winningest competitors in Figure Olympia).

Wilkins stepped away from competitive bodybuilding after the 2017 Olympia.

Having narrowly missed the top spot at the 2016 Olympia, Gillon worked hard in the gym during the off-season. Gillon ultimately broke through with a phenomenal showing at the 2017 Figure Olympia, where fans were in awe of her muscle detail and symmetry.

She defeated Watts to take home the top prize and raised the bar higher for the upcoming Figure Olympia competitors.

Over the next years, Gillon went on a rampage that saw her become the first and only six-time Figure Olympia champion. She retained her title each season from 2017 to 2022 and has gone undefeated since finishing second behind champion Candice Lewis-Carter at the 2018 Arnold Classic Australia.

Cydney Gillon has won her sixth Figure title at 2022 Olympia contest, which took place from December 15-18, in Las...