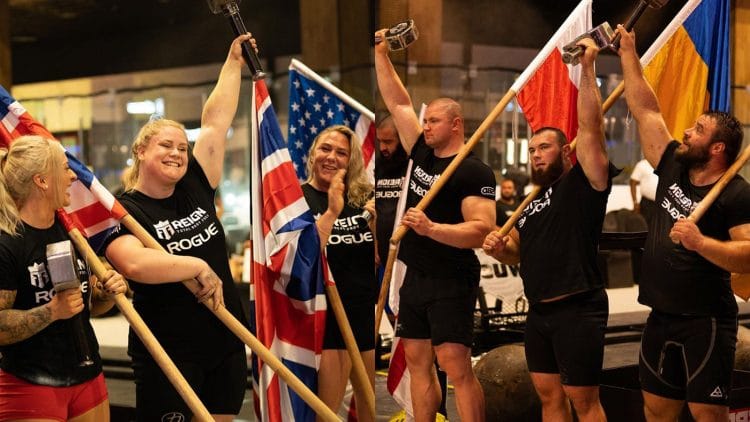 Strongman champion Oleksii Novikov of Ukraine won yet another event this year while UK’s Annabelle Chapman takes first at the inaugural women’s contest as part of the World’s Ultimate Strongman (WUS). The competition took place on Friday, September 17, 2021, in Dubai, UAE.

While the men’s show is always a thriller, the world’s strongest women shared the spotlight this time around. The women’s roster was stacked but Annabelle Chapman, who broke the axle press world record in May, was able to fend off three-time legend Donna Moore who took second and Melissa Peacock also made the podium.

Meanwhile, 2020 World’s Strongest Man Oleksii Novikov narrowly edged out Poland’s Mateusz Kieliszowski for the title. This was reminiscent of the 2019 Arnold Strongman Classic South America where he beat Kieliszowski by .5 points making it one of the tightest finishes in Strongman competition.

These are the final standings for the Strongwoman and Strongman athletes who competed on Saturday in the epic showdown.

Here’s a breakdown of how each event went down in Dubai.

Andrea Thompson reigned supreme in this event which may have been expected considering she’s the record holder. She managed 8 reps while Chapman put up seven reps.

Big presser Bobby Thompson who smashed the American log press record earlier this year placed atop the heap along with Novikov, both of who tied for first with 4 reps.

Mateusz Kieliszkowski, who tied for second with Aivars Smaukstelis is also an excellent presser but suffered a triceps injury last year. This may have had an effect on his performance seeing as he messed up on the first rep but finished strong nonetheless.

Donna Moore won this event for the women covering 62.5 meters. In second was Melissa Peacock with 60.6 meters and Andrea Thompson came in third.

Mateusz Kieliszkowski won for the men with a distance of 71.1 meters while Novikov covered 69.2 meters for the runner-up spot in this event.

Annabelle Chapman managed to hold off Donna Moore in this event with times of 17.01 and 17.05 seconds respectively.

Mateusz Kieliszkowski won this event for the men and Oleksii Novikov managed to get the second-place result.

Note: Top two Men’s times were not displayed and we will be sure to update accordingly.

The chain railway carriage was the mystery event that the Strongwoman competitors had the pleasure of trying out first.

The event entailed pushing this sled with chains attached down a course. But there was a pulling element as athletes had to spring down the track, grab a rope and pull the sled back to the starting position.

Melissa Peacock finished first in 30.60 seconds and Anabelle Chapman was behind her with a time of 31.86 seconds. In third was Sandra Bradley who completed the event in 32.91 seconds.

Mateusz Kieliszkowski scored his third event win in a row, turning in a time of 25.34 seconds while Oleksii Novikov was close in second with 29.11 seconds.

And for the finale… the Atlas Stones event where athletes have to lift 10 large, heavy stones onto platforms in a race to the finish.

Donna Moore completed 9 stones in the fastest time but Melissa Peacock and Cori Butler also finished with nine stones to take second and third respectively in this event.

This was where Oleksii Novikov secured the World’s Ultimate Strongman victory, finishing all 10 ten stones 57.04 seconds. He did place second behind Aivars Smaukstelis (10 stones in 55.65 seconds) in the Atlas Stones, and although he was neck and neck with Mateusz Kieliszkowski, his performance was enough to fend off the Polish Strongman.

Novikov nearly dropped the last stone after struggling but his champion-caliber mindset allowed him to fight his way to the finish line.

JF Caron followed behind in third ending with 10 stones in 75 seconds.

That’s a Wrap and What To Look Forward To Next!

Congrats to the winners in their respective categories. Annabelle Chapman and Oleksii Novikov showed up and showed out in Dubai, each bringing home a prestigious title.

But the fun and excitement don’t end here. Tomorrow, September 18 is the boxing match between Strongman legend Hafthor “The Mountain” Bjornsson and arm wrestling great Devon “No Limits” Larratt.

While these behemoths will headline Fight Night 3, there are a few intriguing undercards. These include CrossFit veterans Josh Bridges and Jacob Heppner going head to head while top women’s Powerlifter Stefi Cohen will face-off against Marcelo Nieto in her second Pro boxing bout.

Get all the details on the event and see how you can watch here.