All ten athletes for the finals of the 2022 World's Strongest Man have been revealed, and here is how they qualified. 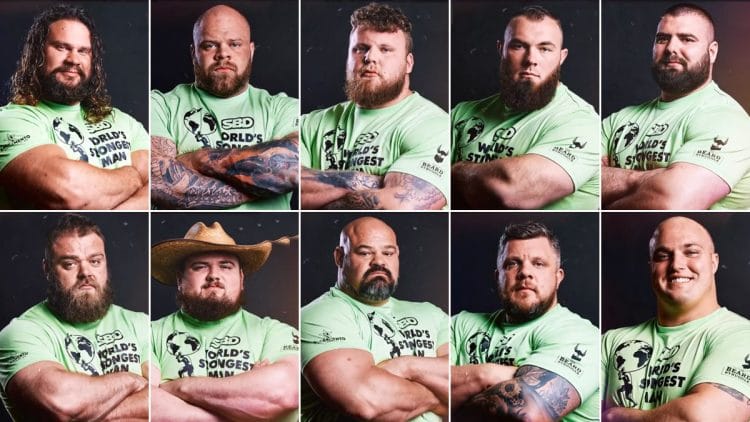 The qualification for the 2022 World’s Strongest Man finals is now complete after three grueling, but impressive days. The 2022 WSM finals will take place on the weekend of May 28-29, in Sacramento, Ca. Only ten athletes will be taking part, and they earned their spot by defeating the other 20 competitors.

The first five finalists qualified directly by winning their group after five events. While the other half of the finalists were decided solely through the Stone-Off event.

Take a look at your official #WSM2022 Finalists 💪 pic.twitter.com/0iCOt4eKvK

The defending World’s Strongest Man champion, Tom Stoltman, was the first one to claim his place in the finals. This was the first time that Tom won his group, but he did so with extreme ease.

Tom won the first four events of the 2022 WSM (Loading Race, Deadlift Ladder, Car Walk, Log Lift), which pretty much secured the win in his group. Tom did not waste any energy on the third day, so he should be fully recovered and energized for the finals.

The debutant from Canada , Mitchell Hooper, was without a doubt the biggest surprise in this year’s World’s Strongest Man. He was placed in the ‘group of death’, but still managed to outperform the likes of Brian Shaw, Mark Felix, Konstantine Janashia, Gabriel Peña, and Bobby Thompson. Mitchell started the competition with two brilliant event wins on day one.

This immediately gave him a massive advantage, but Hooper’s solid performances on days two and three further cemented his place in the finals, since he won group two. The 2022 WSM is Mitchell’s first ever international competition, so he does not have any major wins to his name just yet.

The 2020 World’s Strongest Man, Oleksii Novikov, is no stranger to competing at the highest level. He has been on fire this season, having won the 2022 Europe’s Strongest Man and placing second in the 2022 Arnold Strongman Classic. The moment carried over to the World’s Strongest Man contest, as Oleksii posted a solid event in each of the five qualifying events. He won three of those events, and qualified for the finals as the winner of group three.

Another previous World’s Strongest Man winner, Martins Licis, secured his place in the finals by winning his group. Martins has not competed in the WSM since his win in 2019.

However, after three years of battling with injuries and setbacks, Martins managed to win the first two events, and finished top three in all other events of his group. He also won the 2022 Arnold Strongman Classic this year already, so he will be very confident going into the finals.

The final group winner and direct qualifier was Luke Stoltman, since he dominated group five. Luke won three out of four events accros the first two days, so he had enough points to win his group at that point already. Like his brother, Luke did not want to waste any excess energy, so he did not even attempt the wrecking ball hold.

He will be going into the finals with two full days of rest, unlike the majority of other competitors who had to battle for their place on day three.

Gabriel Rheaume earned his place in the Stone-off event, as he finished in third place of group one. His opponent in the stone-off turned out to be Kevin Faires, who is notably very good at atlas stones.

However, Rheaume lifted six stones, while Kevin’s sixth stone slipped out of his hands until his time eventually ran out. Gabriel Rheaume won the 2021 Canada’s Strongest Man contest, but has gotten even better since then.

The 4x World’s Strongest Man, Brian Shaw, found himself in a very difficult position, since he was also the third-place finisher in his group. However, Brian did not waste almost any energy, as his opponent Bobby Thompson could not lift even a single stone because of problems with the tacky.

Brian only lifted one stone to win the event and qualify for the finals. Although it seems like Brian is not in shape to contend for the title, he revealed that all of his training was focused on the events which take place in the finals. So we will see a whole new Brian Shaw in the ultimate stage of the competition.

Trey Mitchell also qualified for the 2022 WSM finals, but Adam Bishop did not make it easy for him. A great battle ensued between the two men, and their Stone-Off looked like it would continue forever. They both ended up lifting incredible 11 stones, but Adam Bishop failed his 12th lift, and Trey Mitchell did not have to attempt it since he placed higher than Bishop on the first five events.

Trey won the 2021 Shaw Classic last year, which proved that he is more than good enough for the most elite competitions.

The third-place finisher from the 2021 WSM, Maxime Boudreault, is considered as one of the greatest Atlas stone lifters in the world. He faced Pavlo Kordiyaka in the Stone-off, but Maxime was just too good for him. Pavlo failed his seventh stone, while Boudreault seemed extremely fresh and ready for more.

This could be another year filled with success for Maxime, but it will all depend on how he prepared for the finals. Maxime’s most recent win came in the 2021 Magnús Ver Magnusson Strongman Classic, but his ultimate goal is definitely to win the 2022 WSM.

Eythor Melsted has managed to qualify for his second consecutive WSM final, as he claimed the tenth and final space for this year’s competition. He went head-to-head against Coraboeuf in the Stone-off and won by lifting five stones.

Melsted finished in 10th place last years, so his aim will be to improve on that in the next two days. Melsted does not have any major wins to his name, but he is the only representative of Iceland in this year’s WSM.

Related: Shane Flowers Out Of The 2022 World’s Strongest Man Due to Injury

Everything is set for the 2022 World’s Strongest Man Finals, as Strongman athletes and fans are waiting for two undoubtedly interesting days. The finals will consist of six events, that is three on each day. Check out the schedule below: