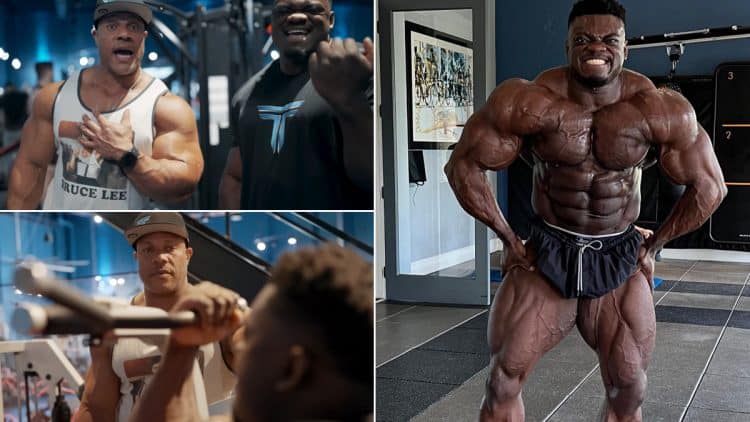 Blessing Awodibu recently partnered with bodybuilding legend Phil Heath for an arms workout to get ‘a little extra push’ in his 2022 Olympia prep. Awodibu is an Irish professional bodybuilder and an influential social media star. He competes in the IFBB Pro League’s Men’s Open division and he will make his Olympia debut this year.

In 2022, Awodibu competed at the 2022 Indy Pro and the 2022 New York Pro and emerged victorious with a direct qualification to the 2022 Olympia. Awodibu’s legs were admittedly the weakest part of his physique. After making significant improvement in lower body muscles, he is now working hard to bring a complete package with excellent conditioning on stage.

To get Olympia-winning arms, the Boogeyman worked out with Phil Heath. Heath is considered among the greatest bodybuilders in the history of the sport. He won the prestigious Mr. Olympia title a whopping seven times from 2011 to 2017. Heath has not competed professionally since a third-place finish at the 2020 Olympia. While the 42-year-old has not officially announced his retirement, he did analyze the practical difficulties in making a comeback for an eighth Mr. Olympia title in one of the interviews.

The duo trained together as Heath shared his bodybuilding knowledge and gave some valuable insights to help Awodibu. The video of this session was uploaded on Blessing Awodibu’s personal YouTube channel.

Blessing Awodibu and Phil Heath go through an arms workout

Awodibu and Phil Heath met at the gym as Awodibu expressed his gratitude and excitement to have the 7-time Mr. Olympia champion around for a training session.

“We just wanted to make sure that you’re getting the right advice. So we wanted to see you’re doing everything right and then being able to ask me anything,” Heath replied.

Phil Heath further stated that Awodibu’s close-knit circle is obviously motivating him in training. But he wanted to be there and give a little extra push for the Boogeyman to do better. With that, the duo jumped into the arms training session.

Awodibu and Heath started the workout with Unilateral Preacher curls on the machine. Heath inquired Awodibu about his warm-up routine to get an idea about his training methods. Awodibu said:

“I’m not one of those guys who gotta spend 15 minutes on the treadmill to warm up. I just go straight to the body part I am training, start off light and maybe do… the first two sets are my warm-up sets. We’ll knock it up from there.”

The triceps are pressed against the pad during this exercise. Therefore it isolates the biceps muscles to a far greater degree compared to other biceps exercises.

Heath explained that his workout split during the earlier days of training largely favored arms exercises. As a result, his arms overpowered the other upper body muscles during posing. On coach Hany Rambod’s advice in 2010, Heath slowed down the arms training and was able to bring his shoulders, chest, and back at par with his massive arms.

“It was very depressing but it was for the bigger goal. So going into the last three weeks (of the prep)… That’s when we started reintroducing some arms training but not crazy heavy…” Heath added.

The bodybuilder duo next worked the biceps with this exercise and got a few solid sets in.

The Boogeyman and Heath took to the most common exercise to target the biceps. While explaining the reasons for doing this exercise unilaterally, Heath said:

“I want to put all my attention to that one side. Because one arm for me is slightly bigger than the other. My right side was always smaller than the left.”

After performing a few sets of this movement, he took to the final biceps exercise of the day.

In addition to working both heads of the biceps brachii muscles, the concentration Curls also activate the brachialis muscles that lie underneath the brachii. It is an isolation movement that can also be clubbed with other compound movements that activate the biceps to a lesser extent. The 2022 New York Pro winner got a few sets of this exercise under the belt and moved on to do the triceps exercises next.

Awodibu and Heath next took to the triceps exercises and started with the rope pushdown to activate the triceps. After performing a few sets of this exercise with slow and controlled movements, Awodibu took to the next one.

Overhead triceps movements also provide a great range of motion and full elbow flexion to get a maximum contraction in the triceps. Awodibu and Heath performed overhead cable triceps extensions to work the muscle group further and jumped into the final triceps exercise of the day.

Side One Arm Reverse Cable Pushdown

The famed bodybuilders performed this isolation movement as the finisher to the arms workout. Most pushdown variations are excellent in building triceps muscles. However, the reverse grip can help emphasize the outer triceps head.

Awodibu and Heath cranked out a few solid sets of this exercise and wrapped up the arms training session.

Blessing Awodibu’s primary goal at the 2022 Olympia is to show the bodybuilding fans that he is not just a social media star but a serious contender in the sport.

“My Goal in this Olympia is to show fans of bodybuilding that, ‘listen. I’m here for a reason. All that Instagram stuff… that clowning and sh**. That’s just me having fun. Bodybuilding’s my thing. I love this sport and my goal is to be the best. My goal for this year’s Olympia is to show I’m real and I am out for the business. So I can’t let off the smoke. No stones unturned…” Blessing Awodibu said.

There is no better way to prove his mettle than going against the biggest and most accomplished names like reigning champion Mamdouh ‘Big Ramy’ Elssbiay, Brandon Curry, and rising contenders like Nick Walker, Hunter Labrada, and Andrew Jacked to name a few. Whether he succeeds in this endeavor or not is a different matter. However, Awodibu is certainly becoming a source of motivation for millions around the world, and that matters too.