The reigning 212 Olympia winner is ramping up preparations for the sport's biggest show of the year. 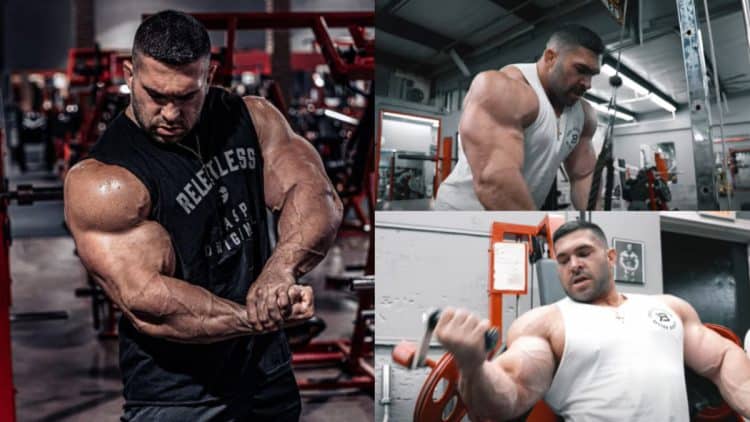 Derek Lunsford is in the heat of preparations for his current bodybuilding season. In a recent video, Lunsford shared a demanding arm workout in contest prep for 2022 Mr. Olympia.

It’s been a wild ride for Derek Lunsford this year. He proved himself at the 2022 Pittsburgh Pro in May despite not competing. During that obligation, he guest posed alongside some of the sport’s most respected Men’s Open competitors, like Nick Walker, Brandon Curry, and Hunter Labrada. The performance left many in the community curious how Lunsford will look when he’s standing next to other Open class standouts.

Derek’s coach, Hany Rambod, expressed concern about Lunsford’s ability to make the weight safely for the 212 division. This worry was also vocalized by Olympia President Dan Solomon, who suggested that a special invite was being considered back in July. In the end, Lunsford accepted a special invitation from Olympia brass in September to compete in the Men’s Open division.

While some in the community took issue with the invite, others are in support of Lunsford getting the opportunity. This year’s Olympia contest takes place from December 15 – 18 in Las Vegas, Nevada. In preparation for the marquee show, Lunsford is sharing his latest arm workout and posing session.

You can find a full list of exercises used in his workout video below:

Lunsford made it clear before the workout that he’s focusing mostly on his biceps and triceps for today’s workout.

“This is my second arm day this week. Earlier in the week, we did a lot of volume in the biceps because I really want to get better mind muscle connection.”

“High reps. Not so much weight, a little bit lower weight, higher reps, and a lot of sets.”

Lunsford fired off reps on the unilateral bicep curl machine next.

The reigning 212 Olympia winner performed his second dumbbell movement of the training session, where he completed two sets.

According to Lunsford, his training is based on what area he feels he needs to improve the most.

“Whatever I feel like needs more focus [goes] first. So, if I think my biceps need a little bit more attention then I like to start with biceps but if I feel my triceps need more attention, I focus on triceps. So, whichever one I feel like I need to bring up the most, and it flip-flops man.”

Before the next exercise, Lunsford gave fans an update on his weight, which is hovering over 250 pounds.

“Still over 250 [pounds]. It’s coming down a little bit, a couple pounds here or there. But I can just tell, I’m getting leaner and leaner but I’m getting stronger, bigger, rounder, more separated. I’m really surprised. I thought I would drop ten pounds really quickly. I dropped five to seven pounds but three or four of it was really fast,” says Lunsford.

In addition to the grueling arms workout, Derek Lunsford shared a posing demonstration. He was joined by Rachel Daniels, an IFBB Pro Women’s Physique competitor, who developed a solid reputation as a posing coach.

“When you do this [posing], it’s going to be a big statement to the whole league that posing isn’t dead and that the big guys don’t have any excuse and they can still get down. I feel bad for whoever goes after you [at 2022 Mr. Olympia],” says Rachel Daniels.

While soaking up any knowledge he could, Lunsford shared that he has a newfound appreciation for posing routines.

“Before posing routines weren’t really fun for me. Now, you put something together, we’ve been working — I’m actually having fun with it,” Lunsford said.

The last time we saw Lunsford building his physique, he was annihilating his traps and shoulders with a brutal workout. During that training session, Lunsford crushed a dumbbell lateral raise PR (personal record), once again proving that his strength continues to increase.

Already, a number of gurus and legends have given their predictions for 2022 Mr. Olympia. While some have suggested Lunsford will ‘look too small’ next to many Open contenders on the Olympia stage, others completely disagree with that notion. Chris Aceto is one of them and envisions Lunsford absolutely destroying this year’s Olympia contest.

Lunsford’s prep appears to be progressing smoothly. Following an extensive arm workout, the reigning 212 Olympia winner plans to show everyone why he was honored with a special invitation to 2022 Mr. Olympia.

Watch the full workout video below:

How To Do Bird Dog Rows – Muscles Worked, Benefits, and Alternatives