With off-season preparations heating up for 2022 Olympia, Lunsford shares tips on how to get an insane bicep pump during a recent training session. 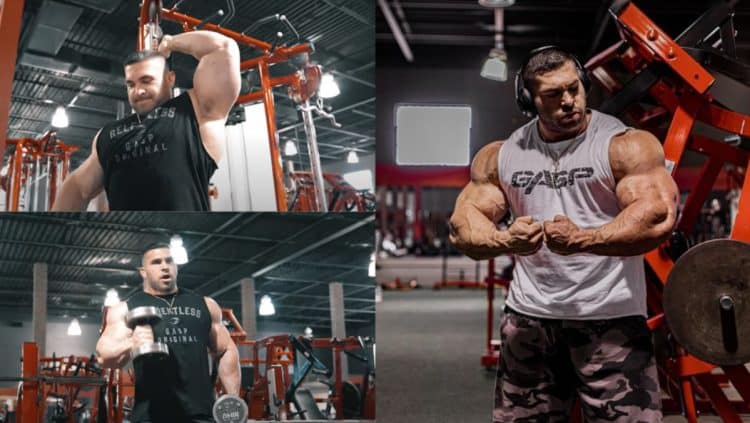 212 competitor Derek Lunsford continues to turn heads during his off-season preparations for 2022 Olympia. In a recent video, Lunsford demonstrated a series of arm workouts where he focused on building the biceps and triceps.

Lunsford quickly made a name for himself in the IFBB Pro League and led a career that has blossomed over the past few years. The up-and-comer was tasked with facing 212 divisional kingpin Flex Lewis at 2018 Mr. Olympia. While Lunsford was unable to steal the Olympia crown, his runner-up performance rang loud amongst his peers. Determined to become champion, Lunsford returned to the 2019 Mr. Olympia stage but found himself in second place once again, but this time to Kamal Elgargni.

Despite his persistence, Lunsford wasn’t able to redeem himself at 2020 Olympia, ultimately turning in a fourth place finish. Instead of wallowing, he put his nose to the grindstone and worked relentlessly on producing his best package ever. As a result of his efforts, Lunsford dominated at last year’s 2021 Mr. Olympia contest, an event that saw him reign supreme in first place.

His current off-season has been one of the busiest, as the 212 competitor made a guest posing appearance at Jim Manion’s 2022 Pittsburgh Pro. Lunsford stole the show replacing Big Ramy, posing alongside mass-monsters in the Men’s Open division like Nick Walker, Brandon Curry, and Hunter Labrada without appearing undersized.

His coach, Hany Rambod, revealed that his pupil has added so much size as of late, that he’s unsure if 212 is still in the cards for Lunsford later this year. Rambod stressed that Derek moving into Men’s Open is something they are having to consider at this juncture.

In addition to Rambod, Olympia President Dan Solomon recently voiced his concern about Lunsford making weight for the 212 division in a safe manner. He went so far as to say that Derek is ‘nowhere near 212 at this point’. Regardless of which division Lunsford commits to, his knack for intense training is unlikely to change.

*Reps were unclear based on the footage provided in the video

Kicking off the training session, Derek Lunsford let his audience in on his plans to go to see Thor: Love and Thunder later in the night. Despite experiencing some fatigue, Lunsford opts to start on machine single arm biceps curls.

“Since I trained back yesterday, my arms are a little fatigued. That’s okay. Today is just like a little bit of a pump. Really, I’m just trying to get a pump to go watch this Thor movie tonight.” Derek Lunsford told his audience.

For Lunsford, he highly favors EZ bar prone incline curls because they isolate and help develop both heads of the bicep.

“Love this exercise for biceps. It’s probably the best to isolate the biceps specifically, that way you’re not like swinging it up. You have to really control it up with your biceps and it really helps to target and develop that peak. When you’re here, it develops this kind of area here.”

Lunsford added that he flares out his elbows during this workout to get the most out of each contraction.

Before moving onto the next exercise, Derek ran into former 212 Olympia champion Kamal Elgargni and exchanged pleasantries.

During this exercise, Lunsford practiced hammer curls and regular biceps curls with dumbbells.

“Switched that up, did some hammer curls and then some regular biceps curls with the dumbbells. Couple different variations of dumbbell curls.”

Lunsford proceeded with dual high cable biceps curls next, an exercise he says he hasn’t practiced in a while.

Before switching up the workout, the reigning 212 champion stressed that not a lot of weight is needed during this movement, only about 20-pounds.

Lunsford hits triceps next with a series of workouts.

The defending 212 Olympia champ was unsure exactly how many reps he did while practicing cable triceps pushdowns but believes it was ‘around 20’ reps for one of the sets.

Before approaching his last exercise of the training session, Derek revealed that he did two sets of cable triceps pushdowns for 12 reps and 20 reps for the third set.

For his final exercise, Lunsford used the triceps extension machine. He added that he would like to incorporate this exercise more going forward.

“This used to not be an exercise that I cared for but when I was out in Dallas last time training with Hany [Rambod], we did this exercise, and I could tell by the way we were doing it that it was really effective for my triceps.”

Derek Lunsford says this movement helped target an area that he doesn’t normally hit. The former 212 Olympia winner’s commitment to the sport is one of his best attributes as a competitor.

Thus far, Lunsford has kept fans in the loop as he continues adding muscle to his gargantuan build. The bodybuilder recently shared an intense calf and delts workout, showcasing some of the improvements he’s made since last year.

RELATED: 212 Olympia Champion Derek Lunsford Annihilate Back Workout: “You Have to Respect the Weight”

Judging by Lunsford’s latest blood-pumping arm workout, the bodybuilder is redlining his preparations to ensure he’s ready to contend for gold when he’s back on stage. The countdown for 2022 Mr. Olympia has begun and Lunsford is determined to produce another statement-making performance later this year.

How Many Calories Does Mowing the Lawn Burn?