"The Giant Killer" goes through a biceps and triceps workout as part of his 2022 Olympia prep. 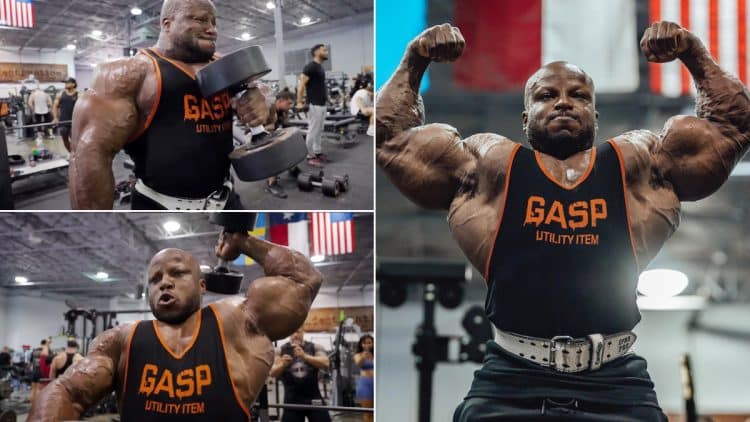 Shaun Clarida is an American professional bodybuilder that competes in the IFBB Pro League. The 40-year-old has competed in the 212 division for the majority of his career. His career highlight has been winning the 212 Olympia title in 2020. Following a runner-up finish behind the current 212 champion Derek Lunsford at the 2021 Olympia, Clarida made a foray into the Open division.

At five-foot-two inches tall, Clarida has a much smaller frame than most Open division competitors, which initially put his move to the big boy division under scrutiny. However, he proved everyone wrong and won his divisional debut at the 2021 Legions Sports Fest Pro. The win at the show earned him a qualification to compete in the Open division at the 2022 Olympia. It also earned him the moniker “The Giant Killer” for slaying the far bigger opponents.

The New Jersey native intends to make history by competing in both 212 and the Open division at the 2022 Olympia that will take place from Dec. 15 to 18 in Las Vegas, NV. However, he is yet to get a nod from the Olympia management for competing in both divisions.

Recently, The Giant Killer went through an arms workout as a part of his Olympia prep. The video of this session was uploaded on his YouTube channel.

Clarida started the workout with rope pushdowns to warm up the triceps and elbow joints. Since elbows are used in all arm movements, it becomes essential to sufficiently warm them up along with the muscles before jumping into heavier exercises.

Clarida performed a few warm-up sets and a triple drop set of this movement and jumped onto the camber bar cable curl.

While speaking about the importance of warm-up exercises, Shaun said:

“I’m not going to go into my compound movements until everything is warmed up. I’m an old man guys… I definitely don’t recover the way I used to. I definitely can’t jump into the gym and start going heavy. So, warming things up, being smart about my training… That’s definitely what has enabled me to keep going on after 17 years…”

After a few sets of camber bar cable curls, Clarida moved on to the final warm-up exercise— the triceps pushdown.

After getting a sufficient dose of warm-up exercises, Clarida started the heavy sets. He first took to the hammer curl to work the brachialis muscle that adds thickness to the side of the arm. The Giant Killer performed the cross-body variation of this exercise and cranked out three to four sets.

Clarida next took to the overhead dumbbell triceps extensions to work the triceps. Full elbow extension is the key to complete contraction of the triceps. Performing this exercise with one dumbbell and both arms does not allow a full elbow flexion. However, unilateral extensions remove this flaw.

The 40-year-old performed a few sets of this exercise unilaterally and jumped to the next one.

Preacher curls are arguably the best isolation exercise for working the biceps. The triceps are resting against the pad, and the shoulders are at rest during the movement. Therefore, preacher curls help isolate the biceps to a much greater extent than most biceps exercises.

Clarida cranked out a few sets of this exercise unilaterally and jumped on to the final triceps exercise of the day.

This movement served as the finisher of the triceps movements as Clarida performed a few sets and went on to perform the final exercise of the training session.

The 2020 212 Olympia champ wrapped up the training session with a few sets of this exercise to target the brachialis.

Clarida’s competition prep for the 2022 Olympia is going on with furious intensity and discipline. It is unclear whether he will be able to compete in the Open and 212 divisions at the Superbowl of bodybuilding later this year in December. However, assuming he remains in the 212 division, Clarida will have to fight off Kamal Elgargni to recapture the Olympia 212 title.