All signs point to absolute domination for Big Ramy at the upcoming 2022 Mr. Olympia contest. 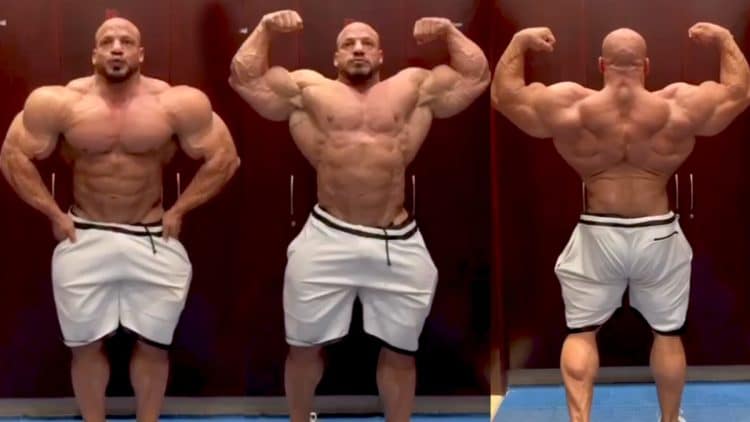 Winter is coming and this year’s contest prep for Mamdouh ‘Big Ramy’ Elssbiay is underway. In a recent post made by his coach Chad Nicholls, Ramy looked massive and conditioned nine weeks from his title defense at 2022 Mr. Olympia.

Ramy’s bodybuilding season was turned upside down earlier this year. He was unable to guest pose at the Pittsburgh Pro months ago, which caused mayhem within the bodybuilding community. While Ramy apologized weeks later, the absence left many curious about his commitment to the sport.

Unlike previous years, Ramy has been more forthcoming with physique updates and keeping fans informed. However, he was recently criticized, when many thought his shoulders looked inflamed and pointy due to Synthol use. Ramy later fired back at those notions with an update showing his shoulders looking softer and less inflamed.

Late last month, the reigning champion left the community stunned after revealing a jacked 337-pound build. This erased any doubts about his commitment to the sport. Then, days later, he provided what was arguably his most impressive physique update of all time.

A number of veterans and figureheads believe no one at this point has the firepower to stand against Big Ramy. Four-time Mr. Olympia Jay Cutler believes he’ll win 2022 Olympia ‘handily.’

Cutler’s predecessor, eight-time Olympia winner Ronnie Coleman, shared a similar sentiment. He’s so confident in the reigning champion, he went so far as to already congratulate Ramy on his third Olympia title. With momentum seemingly in the champion’s corner, Ramy’s coach, Chad Nicholls, is sharing some posing footage ahead of the biggest show of the year.

“TEAM MAYHEM UPDATE: normally I don’t like to post a lot of updates but @big_ramy progress this week was so good had to share with everyone – right now he is a machine blinders are on and it’s all about the work – his mindset is so amazing right now it’s just crazy – I can guarantee this is the best he’s ever looked at 325 pounds” Chad Nicholls wrote.

His coach added that the ‘blinders’ are on, and they are solely focused on training at the time of this publication. It didn’t take long for the comment section to start buzzing after Ramy’s impressive update.

In addition to his recent comment, eight-time Mr. Olympia Lee Haney gave his thoughts on 2022 Olympia. He advised top contender Brandon Curry to bring more muscle separation because ‘nobody is going to outsize Big Ramy.‘

Ahead of this year’s contest, coach Dennis James flew to Dubai to measure Ramy’s progress as preparations heat up. After pushing Ramy during training sessions, James said fans can expect to see the ‘best Big Ramy ever’ when he steps on stage this December.

There are a number of threats eager to strip the title out of Ramy’s hands. Consistent Olympia finisher Hadi Choopan is planning to bring a new look to his physique. Meanwhile, Brandon Curry continues to add size to combat Ramy. In addition, top five finishers Hunter Labrada and Nick Walker are both looking massive ahead of the show as well.

The champion is confident heading into his next Olympia contest. When asked what he thought was his weakness, Ramy explained that he doesn’t have a weak body part but pointed to his overall conditioning as something that needs to improve.

RELATED: Dennis James on Enhanced Labs Contract Dispute: ‘They Tried to Go Behind My Back and Negotiate with Ramy’

From what fans and followers have seen thus far, Big Ramy’s prep is going smoothly. According to his coach Chad Nicholls, he expects Ramy to be at his all-time best when the two aim to secure their third Sandow trophy together this winter.