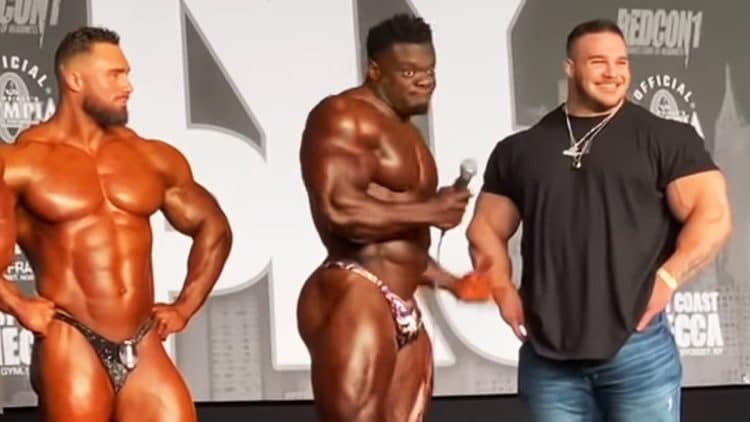 Revenge was on Blessing Awodibu’s mind following his major victory at the 2022 New York Pro over the weekend. Awodibu rekindled his rivalry with Nick Walker on stage after the first-place finish and intends to ‘whoop his ass’ at the upcoming 2022 Mr. Olympia contest.

Men’s Open competitor Blessing Awodibu’s 2022 season of bodybuilding has been tremendous. He kicked off the year with a dominant victory at the 2022 Indy Pro, the same show where he made his professional debut last year in third place. After earning his invitation to this year’s Mr. Olympia contest as a result of the Indy Pro win, Awodibu kept his foot on the gas, eying another title on the east coast. He was pushed by Italy’s Andrea Presti at the New York Pro over the weekend, but Awodibu’s next-level conditioning guided him to victory once again.

Last year, a rivalry between Blessing Awodibu and 2021 Arnold Classic champion Nick Walker came about. It began before the 2021 New York Pro, a show in which both Awodibu and Walker planned to enter. However, Walker brought an undeniable package and won first place, while Awodibu failed to reach the podium, finishing the show in sixth. Based on the package that Awodibu brought in 2021, many fans were surprised to see his physique blow away the competition this year.

Meanwhile, Walker went on to record one of the most successful rookie seasons in bodybuilding after capturing gold at the New York Pro, the Arnold Classic, and then capped off the year with a fifth-place finish at 2021 Mr. Olympia. While the competitive rivalry between Awodibu and Walker appeared to be squashed, it looks like Ireland native is ready to reignite the beef before this year’s Mr. Olympia.

Blessing Awodibu: ‘I Promised Myself I Would Come Down Here and Whoop Some Ass’

After earning his second IFBB Pro victory in two weeks’ time, Blessing Awodibu called out Nick Walker and informed: “The Mutant” of his plans to topple him at 2022 Mr. Olympia.

Prior to the renewed beef with Blessing, Walker made headlines at the 2022 Pittsburgh Pro. He guest-posed at the event alongside 2022 Arnold Classic champion Brandon Curry, Hunter Labrada, and 212 Olympia champion Derek Lunsford. Walker has also kept the public updated on his preparation for Olympia this year. He recently gave fans a glimpse into leg day training with Derek Lunsford. Walker intends to bring one of his biggest packages ever at the end of the year and has been hovering around 290-pounds in order to keep his waist tight while adding muscularity.

RELATED: Bodybuilder Blessing Awodibu Shares Brutal Leg Day Workout: ‘I Will Be On My Best This Year’

This year’s season in the sport is shaping up, and with two major wins under his belt, Awodibu can begin focusing his efforts solely on Mr. Olympia. His conditioning is one of his strongest weapons and Awodibu intends to leverage that advantage when he goes head-to-head against Walker later this year.

Nick Walker, one of the fastest rising stars in the sport, never misses a training session, especially when it comes...

Blessing Awodibu is one of bodybuilding's brightest prospects on the rise, especially after the season he registered thus far in...