The three-time Classic Physique Olympia is pushing past his limits during contest prep for 2022 Mr. Olympia. 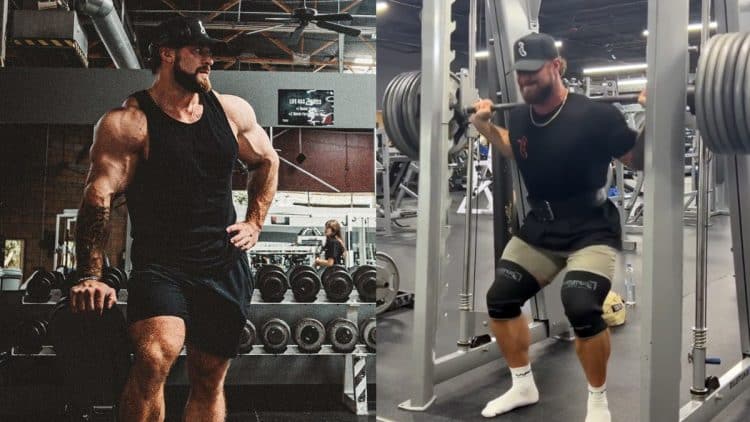 Classic Physique star Chris Bumstead is turning heads as the intensity of his contest prep ramps up. In a recent post made to Instagram, ‘C-Bum’ showed off insane strength after smashing Smith machine squats for reps.

“10 weeks is not a lot of time, but that doesn’t mean alot of work can’t be done.” Chris Bumstead shared.

Bumstead cemented himself as a Classic Physique juggernaut over the past few years. In 2019, he defeated his predecessor, two-time Classic Physique Olympia winner Breon Ansley. Ever since taking Ansley’s title, Bumstead has held on to it tightly. In 2020 and 2021, Bumstead defended his title successfully at Olympia while showcasing a level of conditioning rarely seen at even the highest levels in the sport.

This year, Bumstead has been honest with fans about his bulking diet, training, and supplementation. Many were surprised to hear that he decided to take a ‘decreased’ bodybuilding cycle for this year’s Olympia contest. While he used to run four or five compounds, Bumstead says he looks better since starting his ‘minimal’ cycle.

In preparation for 2022 Mr. Olympia this year, Bumstead hasn’t been shy about sharing his training sessions. In the off-season, the Pro shared a hamstring workout after receiving mesenchymal stem cell injections, which he says has helped his body with restoration. Maintaining one’s status as the best in the world is no easy task, and Bumstead is continuing to push his limits anytime he’s trudging through a brutal training session.

In a recent post made to Instagram, the three-time Classic Physique Olympia winner showcased incredible lower body strength while pushing through Smith machine squats for reps.

With around 10 weeks until 2022 Mr. Olympia, preparations are heating up for all athletes, including Bumstead. Following his impressive video, seven-time Mr. Olympia Phil Heath and rival Breon Ansley were taken aback by the champion’s determination.

Last year, there was growing speculation that Bumstead would try competing in the Men’s Open division. In a discussion with bodybuilding coach Hany Rambod, C-Bum mentioned that if he did try out the Open class, it would only be for a ‘one-off.’ However, following an alarming number of deaths in the sport last year, it seems Bumstead is moving on from the idea.

Last month, Bumstead gave his thoughts on moving into the Men’s Open division. While he once considered the transition, he changed his mind given the risks associated with Open bodybuilding. Bumstead is considering retirement in 2023 but said his 2022 Olympia performance will factor into his next move.

Chris isn’t the only mega star who believes Men’s Open bodybuilding is dangerous. Schwarzenegger named bodybuilding as the most dangerous sport in the world. He also stated that her prefers the look of Classic Physique competitors and believes the division has more promise than the Open.

There are a handful of elite bodybuilders looking to knock Bumstead off his throne. In addition to Ansley, Chris will also be facing Brazilian standout Ramon Rocha Queiroz, who revealed that he has a ‘surprise’ waiting for the three-time Olympia champ.

Meanwhile, two-time Arnold Classic winner Terrence Ruffin has ambitious plans as well as Germany’s Urs Kalecinski — who turned in a stellar performance at the 2022 Arnold Classic before winning the Boston Pro earlier this year.

Given how competitive Classic Physique has become, Bumstead could face his title reign’s toughest test yet. Though, it’s evident in Bumstead’s latest workout that he’s doing everything in his power to separate himself from the rest of the division.