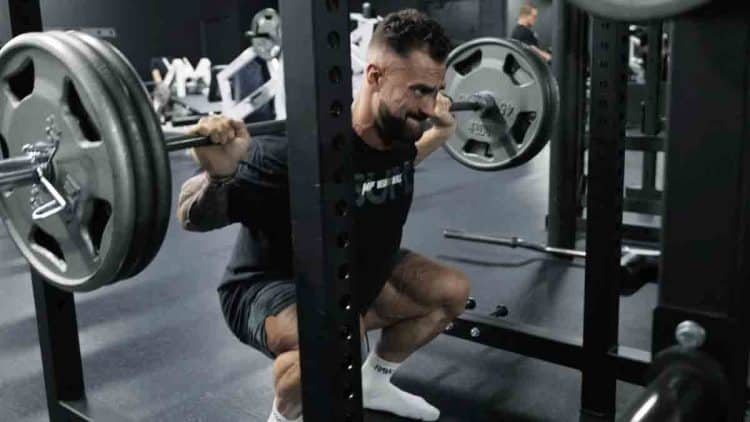 Chris Bumstead returned to YouTube in 2023 with a leg workout. Bumstead is a Canadian professional bodybuilder that competes in the Classic Physique division of the IFBB Pro League. He won the fourth consecutive Classic Physique Olympia title at the 2022 Olympia and created history. CBum captured the crown by defeating former champ Breon Ansley at the 2019 Olympia. He then defended the top spot at the 2020, 2021 and the 2022 Olympia. However, the road to CBum’s 2022 Olympia victory was full of obstacles and unforeseen challenges.

Bumstead hurt his knees in the initial stages of his competition prep which was then followed by a quad injury. However, he overcame the hurdles with unique solutions and continued his march. A couple of months before the show, CBum ended the client-coach relationship with Iain Valliere for the latter to be able to focus on his own pro bodybuilding career. Legendary bodybuilding coach Hany Rambod guided Bumstead through the competition prep as his coach and helped him bring home the 2022 Classic Physique Olympia title.

Bumstead is now back in the gym and posted a video of a leg workout on his YouTube channel after quite a while. A few days ago, Chris Bumstead revealed that he went into the 2022 Olympia with a torn bicep and shed light on the mental challenges he had to overcome due to the injury. In this video, the 27-year-old gave an update on the status of his bicep tear and revealed that he is taking peptides PPC 157 and TB500 to heal the injury. Additionally, he has taken a few stem cell injections. Due to the injury, Bumstead has not trained regularly in almost five weeks.

“I’ve done legs like once a week-ish… Not working hard. So I’m letting my body recover right now. But the Olympia is in nine months,” He added.

CBum has gained approximately 12 lbs since Olympia wrapped up and weighed 251 lbs at the time of recording the video. After giving the update on his injury, CBum headed to the gym and annihilated a leg workout. So without further delay, let’s take a closer look at the detailed account of this training session.

After increasing the blood flow to the muscles with this superset, the reigning Classic Physique Olympia champion took to the first compound movement of the day.

CBum worked the legs with a few solid sets of leg press next. He used moderate weights for doing the exercise and performed the reps unilaterally. While explaining the reason behind unilateral reps, CBum said:

“Partly because I don’t want to put plates on right now. Partly because my knees just feel unstable right now and I want to make sure they’re equally strong.”

After pushing through a few sets of leg press, CBum took to the next exercise of the day.

CBum next performed arguably the most effective compound movement for building lower body strength – the traditional barbell squats. He did the warm-up set with one plate on each side of the barbell and then performed the working sets with incrementally heavy weights. After working his way up to the top set with three plates on each side, the 27-year-old did a back off set with two plates on each side and took to the next exercise.

CBum next performed a few sets of walking lunges to add more stimulus to the lower body muscles. He did the sets with dumbbells and moved on to do some calves work.

Bumstead performed the seated calf raises on a plate-loaded machine. This variation of the calf raise works the soleus muscle in the calf region. After pushing through a few sets of the movement, CBum wrapped up the training session.

Although only 27-years-old, Chris Bumstead plans to retire from competitive bodybuilding in the near future. His 2022 Olympia win is a testimony to the fact that there is still a wide gap between him and the rest of the division. The performance also reaffirms that at least one more Olympia win is not out of reach. It will be interesting to see how things unfold over the next eleven months.