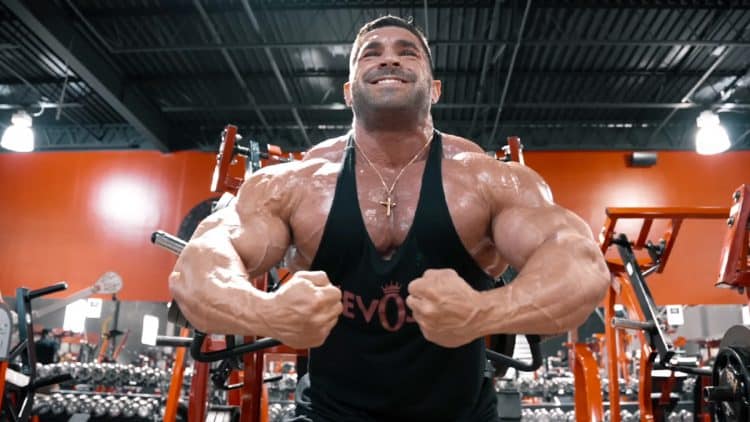 Two weeks after his impressive performance at the 2022 Olympia, Derek Lunsford is back in the gym to keep improving his physique. Lunsford is an American professional bodybuilder that has competed in the IFBB Pro League’s 212 division for the majority of his career. He became the 212 Olympia champion by dethroning Shaun Clarida at the 2021 Olympia. While he was expected to defend the title in 2022, things took a huge turn. Lunsford’s coach Hany Rambod and Olympia president Dan Solomon raised concerns over his ability to make weight for the 212 division. Additionally, Lunsford looked comparable to Men’s Open bodybuilders Nick Walker, Hunter Labrada and Brandon Curry when he stepped on stage with them for guest posing at the 2022 Pittsburgh Pro.

The 29-year-old received a special invitation to compete in the Men’s Open division at the 2022 Olympia. Many experts had predicted that Lunsford could do some damage in the division. The former 212 Olympia champion proved everyone right and then did some more as he achieved a runner-up finish at the show. The Indiana native is confident that he is ‘one step away’ from becoming Mr. Olympia and recently announced his plans for 2023. Derek Lunsford will not compete at the 2023 Arnold Classic and will instead focus on developing his chest and quads to take on Mr. Olympia Hadi Choopan in November.

He has returned to the gym and recently went through a chest workout to kick start the 2023 campaign. 2019 212 Olympia winner Kamal Elgargni helped Lunsford pushed through the heavier sets. Therefore, without further delay, let’s delve into the detailed account of this training session.

Lunsford started the training session with the seated chest press on a plate-loaded machine. After doing the first warm-up set with two plates, Lunsford worked his way up to four plates where Kamal Elgargni pushed Lunsford to finish the set. It was supposed to be Lunsford’s top set. However, he chose to do one more set with the same weights and moved on to the next exercise after a double drop set.

The pressing movements build the pushing strength of the upper body while the flyers / crossovers develop the ability to adduct. Therefore it is essential to incorporate both types of movements in the chest training routine for complete chest development. Lunsford next took to this superset that included Smith machine chest press and low cable crossover. He performed the sets with slow and controlled motion without relying on the momentum at all.

“I’m starting to get a better mind-muscle connection. So that way, when I am performing each rep, I can just feel the muscle fibres firing. That’s something I had a big problem with in the past. I would say just this past year, probably from the 2021 to 2022 season is the first time I felt like I was really firing my chest that much. So now this year I feel like it’s firing even better and I just want to keep going in that direction,” Lunsford stated after performing the superset.

After getting all the sets within the superset under his belt, the 29-year-old jumped into another exercise to put more work in.

The 2022 Mr. Olympia runner-up next performed the pec deck flyes to work the chest further. According to an ACE sponsored study, the pec deck flyes are the second most effective exercise in activating the pectoral muscle fibres after the barbell bench press. As a result, they are a must-include movement in the chest routine.

Lunsford maintained a 10 to 12 rep range for the pec deck flyes and after the top set, he did a drop set. Legargni instructed Lunsford to pause at the end of the concentric phase of the movement for a few seconds after the later sets to keep the muscles under tension for a longer duration. Following this, the Indiana native took to the next movement.

Lunsford next performed the triceps dip press on the plate loaded machine next. While triceps are the primary target muscle group of this exercise, Lunsford had devised a way to make it more lower pec centric. In his own words:

“It can hit the lower pecs too. So am I feeling at the triceps? Sure, I am. First of all, I am facing in the opposite direction. And I am leaning my chest forward over the resistance of the weight. So that way it’s almost like a decline chest press for me. I just feel this a lot better than I do any other lower chest exercise. Whether it be a bodyweight or a decline pressing movement.”

Lunsford stated that the dip machine hits his triceps and the lower pecs the best. Therefore he doesn’t mind hitting the triceps a little more with this exercise as long as his lower pecs also do the work.

“Just by switching the position, leaning the chest over, it is going to hit more of the chest. If I sat more straight up, it would be more of my triceps,” Lunsford added.

After performing some solid sets of dip presses on the machine, the former 212 Olympia champion took to the finisher of the day.

Lunsford wrapped up the chest workout with this isolation movement. He got a few sets of decline cable flyes under his belt and worked his abs with decline crunches and leg raises next.

Derek Lunsford brought one of the best and well-conditioned physiques to the 2022 Mr. Olympia. Veteran bodybuilder Milos Sarcev rightly pointed out that Lunsford probably had the ‘most extreme V-taper in Olympia history’. While he was able to beat some of the biggest bodybuilders in his Men’s Open debut, bodybuilding legend Jay Cutler recently opined that Lunsford can win the 2023 Mr. Olympia if he brings a fuller chest to the stage this year. The former 212 Olympia champ seems to have figured that out and has started working in that direction. It will be interesting how things unfold over the next ten months for Lunsford.