Here is what Eddie Hall has to say about funny gym fails. 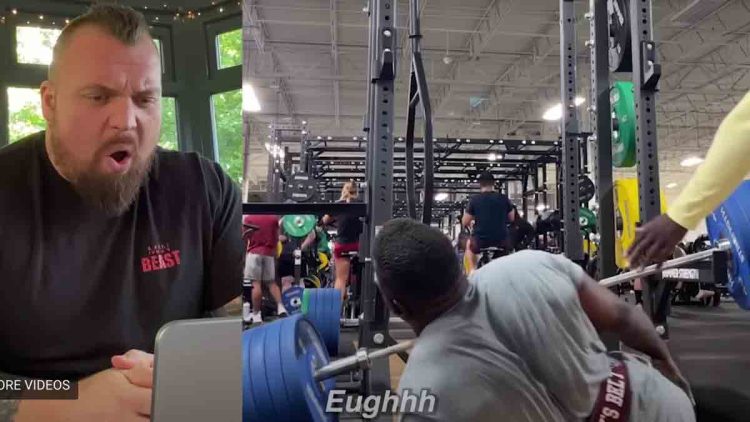 Eddie Hall earned his fame by winning the 2017 World’s Strongest Man contest and becoming the first person to deadlift 500 kilograms (1,102.3 pounds). Nevertheless, his entertaining personality has always made him stand out, allowing him to establish successful YouTube channels. It is not surprising that Eddie frequently reacts to high-demanded videos from his fans on one of his channels.

Most recently, Eddie Hall decided to watch and react to a video compilation of the most hilarious gym fails from all around the world. Over the course of his career, Hall has had a couple of gym-related incidents. A particularly memorable event occurred during a training session when his barbell broke during an axle overhead press of 200 kilograms (449.9 pounds). So, he found some of the clips relatable, while others just made him laugh uncontrollably.

Eddie Hall started off the video by reacting to a gym prank, where a girl glued the bottle cap shut and asked a gym-goer to open it for her.

“Wow, that’s evil. The guy will be thinking, oh I’m in here, I’ll get this girl’s number if I open her Gatorade, but she’s glued it shut.”

The second video made Eddie Hall laugh uncontrollably, as a person filming the clip pointed out an elderly man in the background who was watching one of the girls working out.

“He was, that old man was thoroughly enjoying himself.”

The next clip saw a gym-goer drop the barbell on his chest while doing a heavy bench press. Most commonly, this occurs when someone uses the suicide grip, which is named for this reason. This was quickly picked up by Hall.

“Ohhhhh… That’s what you get for doing a suicide grip.”

Following up on that, Eddie Hall reacted to a clip displaying a gym couple and their struggles. The boyfriend tried to correct the form of his girlfriend, which was not appreciated on her behalf.

“Don’t even bother trying to correct your missus on how to lift. It’s not worth the hassle. I’ve been there… If you ever go to the gym with your wife, don’t ever, ever, ever, correct their form.”

To wrap up the video, Eddie Hall gave his thoughts on the compilation that he watched.

Seeing that Eddie Hall is not actively doing Strongman or Boxing, he has developed some new interests. Most interestingly, Hall has just started his bodybuilding journey, indicating that he intends to step on stage in late 2024. Luckily, he still has some spare time to make videos, including reactions to gym failures like the most recent one.