Discover the training and diet of the dominating football running back. 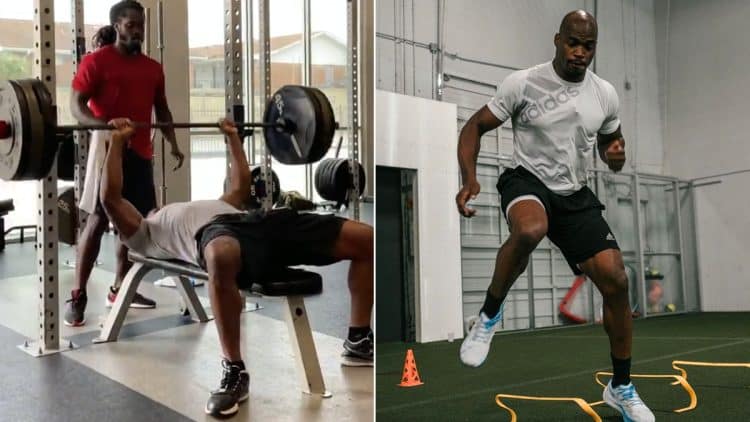 Adrian Peterson is regarded as one of the greatest NFL running backs of all time. He’s fifth in rushing yards and fourth in all-time touchdowns. Adrian’s combination of speed and power made him unstoppable on the football field. In this article, we will dissect the training, supplements, and diet that Adrian followed to achieve his superstar status.

Adrian Lewis Peterson was born in Palestine, Texas, to parents who were both outstanding athletes and college. His father, Nelson, was a star basketball player who was on his way to the NBA when he was accidentally shot in the leg, putting an end to his pro basketball ambitions. His mother, Bonita, was a track and field star.

When he was seven, Adrian witnessed the tragic death of his nine-year-old brother Brian after he was hit by a drunk driver while riding his bike. Adrian dealt with his pain by throwing himself into sports. He ran track and played basketball and football. Within a couple of years, though, he shifted his focus to football as his sport of choice.

During his junior year at Palestine High School, Adrian ended with statistics of 2051 yards on 246 carries and 22 touchdowns. The following year, as a senior, he improved those figures to 2960 yards on 252 carries and 32 touchdowns.

In 2004, he went to Oklahoma State University. During his freshman year, he broke several NCAA freshmen running records and was nominated for the Heisman Trophy.

Peterson decided to forgo his senior year of college and entered the 2007 NFL draft. He was the seventh pick in the first round and was selected by the Minnesota Vikings. He had an outstanding rookie season and was named the associated press NFL Offensive Rookie of the Year.

Peterson had 10 outstanding seasons with the Vikings but couldn’t take them all the way to a Super Bowl title. In February 2017, the Vikings announced they would not exercise the 2017 option on Adrian’s contract, making him a free agent. Over the next five years, he played for the New Orleans Saints, Arizona Cardinals, Washington Redskins, Detroit Lions, Tennessee Titans, and Seattle Seahawks. In January 2022, he became a free agent.

Adrian trained with the high-profile personal trainer, James Cooper. It is said that their first session together was so tough that Peterson threw up three times! Needless to say, his workouts are long and hard. In addition to weight training in the gym, Adrian does plenty of speed and agility work.

All of the hard work that Adrian was putting in came with a balanced recovery program. He hit each body part once per week, and Adrian was careful to get at least seven hours of quality sleep every night.

He took weekends off from training during the off-season to allow for both physical and mental rest. However, he would do some sort of active recovery, usually involving a friendly game of basketball or a light jog through the woods.

Here’s what Adrian has said about his workout style:

“I dedicate myself and work hard in the weight room, and treat every practice as if it were a game. I’ve always been a fan [of Bruce Lee]. How he used to be able to move and be so quick. You look at some of the exercises he did, and it was all majority free weight, like standing on your hands. That works every muscle. Everything is firing.”

Before every workout, Adrian does a rapid-fire warm-up for 10 minutes that involves working on the agility ladder.

Adrian watches what he puts into his mouth, knowing well that it will determine how he performs and looks. He eats six times per day, following a diet with a macro ratio of 50 percent protein, 30 percent healthy fats, and 20 percent carbohydrates.

For a long time, Adrian was a lover of seafood and ate it several times each week. A few years ago, though, he suffered a severe allergic reaction and had to cut all seafood from his diet. Peterson also loves fried foods but disciplines himself to stick mainly with steamed and grilled chicken breast. He is pretty strict on limiting his sugary carb input but occasionally has a bowl of ice cream.

Here’s a quote from Adrian on his eating habits:

“Seafood was always my favorite food. I mean, fried lobster? Come on. I found out shrimp, scallops, and lobster were my allergic triggers, so I had to change my diet. When I’m out, maybe I’m looking at the fried chicken, but I know I need to order the grilled. I love my fried food, and my neck bones and all that too.

Thankfully, I’m lucky enough to be able to eat ice cream. I gotta have my cookies and ice cream! But I work out a lot, so I burn a lot of calories.”

Here is a sample day’s worth of eating for Adrian Peterson:

Adrian uses just two supplements, preferring to get most of his nutrition from whole foods. He takes a protein shake after his workout, adding two scoops of Muscle Milk powder to a blender along with 16 oz of milk and a banana. In the evening, he also takes a Muscle Milk Ready-to-Drink shake.

Adrian also takes a multivitamin every day to ensure that he has all his micronutrient needs covered.

Adrian Peterson is a legendary NFL player who presents a great example of how to train and eat to excel at the very top level of professional sport. Take what you can from Adrian’s workout and nutrition as presented here and incorporate them into your own routine as you continue to work towards your physical strength and development goals.