A breakdown and prediction for the top 6 Open bodybuilders at the 2021 Mr. Olympia 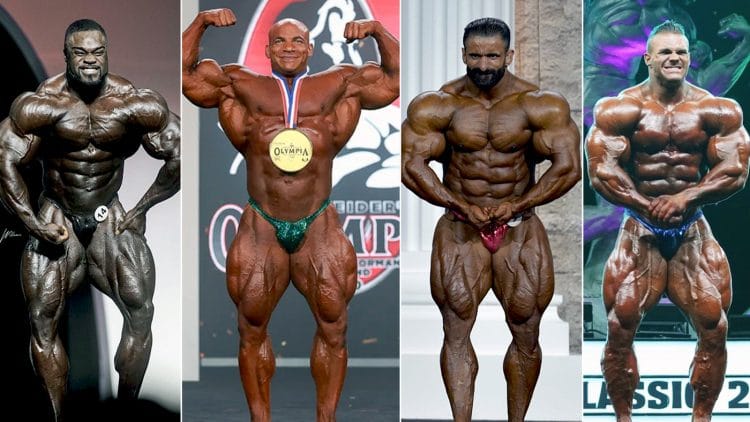 The 2021 Mr. Olympia goes down October 7th-10th, in Orlando, Florida. Ahead of this massive bodybuilding contest, we break down who may wind up in the top six of the Men’s Open, and who will win that coveted title.

The lineup at this year’s Olympia is shaping up to be one of the best versions of the contest that has taken place in a long time. Between the longstanding stars that have ruled the sport for years, and the new crop of stars that are rising up, a changing of the guard is expected to start taking place.

Unfortunately there are some big names and fan favorites who will be sitting out this year’s competition, not least of which is Phil Heath who has been vocal about his frustrations with the Olympia. This will also be the first time that Dexter Jackson is missing from the show in several years, as he retired after last year’s contest.

2018 champion Shawn Rhoden is still dealing with sending legal issues that have left him without a pro card and unable to compete. Longtime 212 king Flex Lewis was ready to make his Open debut, but for the second year in a row he is left dealing with injury.

There was also some rumors that Kai Greene might be making his long awaited return at the 2021 Mr. Olympia. Despite the speculation and hints that he has dropped, he once again has not made an effort to compete.

Nevertheless there will be a lot of big names competing, and naturally not all of them will end up in the top six. Roelly Winklaar has struggled in his last two appearances, qualifying for the show on a second place at the Europa Spain show, but has some issues that prevented him from competing at the Arnold Classic, making his condition unknown ahead of the big show.

Akim Williams has been looking impressive lately, winning the Puerto Rico Pro, but has notable losses to some of the bigger names in the sport. Nathan De Asha was one of the men who beat Roelly earlier this year and just wins the first-ever Arnold Classic UK last week, so it will be interesting to see how he looks if he return to the Olympia stage.

With the wide array of athletes competing in the Men’s Open division this year, it is hard to tell exactly who will arise as the winner by the end of the weekend. However we did our best to comb through the lineup, and determine just who might wind up in the top six of this contest.

After winning the 2021 Chicago Pro, Hunter Labrada promised to bring an even better physique to the 2021 Mr. Olympia. If he is able to do that, he will quite likely find himself sitting in the top six of this contest.

Hunter has been doing a lot of work with his father, the legendary Lee Labrada, ahead of his sophomore outing at the big show. With this help, plus the impressive physique he already has shown on Instagram, many believe that he will be a future champion, but for 2021, we see him landing in the sixth place position.

One of the mainstays of the Men’s Open division, William Bonac has come as high as second place at the Olympia. He was expected to take on the 2021 Arnold Classic, but travel restrictions forced him out of the contest, meaning that the only time we have seen him onstage this year is with a guest posing a few weeks ago.

Provided there is no further issues with him getting into the states, chances are high for him to land in the fifth place position. Any time that he is able to step on stage, he always delivers a well conditioned and balanced physique, and this will likely be the case here.

The hottest prospect in the Men’s Open division in 2021 is clearly Nick Walker. He won the New York Pro and Arnold Classic this year, promising that he would wind up in the top 5 at his first ever Olympia, and that seems very possible.

He has the support of many big names in the sport, and has the mass and conditioning to be a problem for anyone on stage. If he can bring the same physique as the Arnold, he can easily wind up in fourth, but if his package is even better, he might find himself in the top three.

2019 Mr. Olympia winner Brandon Curry was the closest man to beating Big Ramy last year, and has said that he knows what he needs to work on to do better this year. Mainly he has been focusing on adding mass, instead of focusing so much on conditioning like he did last year, to beat Phil Heath.

The one concern is that if Brandon puts too much focus into his mass, he may lose the detail that helped lead him to victory in 2019. However if he can strike that perfect balance, he easily could go toe-to-toe with the defending champ.

Hadi Choopan came in fourth place at last year’s Olympia, but many felt that he deserved to beat Phil Heath. He was also second place on the scorecards during the Finals, with his package being enough to best everyone but Ramy.

Typically Hadi has trouble getting into the United States, which makes his prep difficult, but this year he arrived with several weeks to go. It is quite possible that this will give him the edge needed to make the right adjustments and pull of a second place score.

Big Ramy looked nearly flawless in his win last year, and it is hard not to expect the same thing from him at the 2021 Mr. Olympia. One of his biggest critiques has been about his consistency, but he has been working with Dennis James for the last several weeks, and it seems that this has kept him on track.

If he is able to make the improvements that have been promised between last year and this year, it is tough to see anyone holding a candle to the impressive package he will bring. Even if he looks the exact same though, he will still be tough to beat, which is why we predict that he will be defending his title.

What do you think of these predictions for the 2021 Mr. Olympia? Is there anyone that we are missing that you think will be in the top 6?