Strongman hype is at its all-time high, but it took almost 50 years to get it to this point. 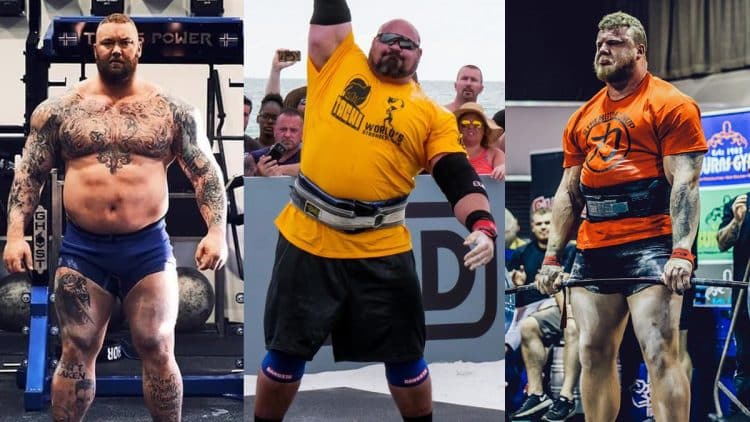 A selected few athletes have gotten their hands on the World’s Strongest Man title, an accomplishment that led to great fame for some of them. The names which stand out are Brian Shaw, Big Z, Bill Kazmaier, and more.

Bruce Wilhelm began his professional career as an Olympic weightlifter, and was highly successful in that sport as well. He won a silver medal for the United States at the 1975 Pan-American Games in Mexico City in the +110 kg division, and placed 5th at the 1976 Olympic Games.

Bruce then won the inaugural 1977 World’s Strongest Man contest, and came back in 1978 to successfully defend his title. Following that, he spent the next few years organizing competitions and helping to improve Strongman.

He then crossed over to Strongman in 1978 and got a silver medal. That was not enough for Don, so he came back and won the World’s Strongest Man in 1979.

The year 1980 saw the rise of one of the most Iconic Strongman athletes in history. Bill Kazmaier broke through and won three consecutive World’s Strongest Man titles, becoming the first man in history to do so.

Kazmaier is still involved in Strongman, where he often participates in major competitions as an official commentator.

As Bill Kazmaier opted not to defend his title for the third time the British representative, Geoff Capes, won two World’s Strongest Man competitions in 1983 and 1985.

Jon Pall Sigmarsson was the first man to bring the World’s Strongest Man title to Iceland, and it set the standard for decades to come. In addition, Sigmarsson started a brand new era in Strongman, having won four WSM titles and displayed incredible longevity in the sport.

Jamie Reeves got the chance to experience the WSM podium in its fullest, having won the show in 1989, placed second in 1992, and third in 1988. Reeves is also a 2x Europe’s Strongest Man, 9x England’s Strongest Man and a 4x Britain’s Strongest Man.

One of the potential G.O.A.T’s of Strongman rose to fame in 1991 and went on to win three more World’s Strongest Man titles in 1994, 1995, and 1996. Magnus was significantly stronger than any champion before him, inspiring many of the later champions and athletes in today’s sport to start doing Strongman.

Magnusson now has his own Strongman competition called “Magnus Ver Magnusson Classic” and presents one of the fairest and strictest judges in modern Strongman.

Fun fact: Magnus Ver Magnusson came into the 1991 WSM as a reserve, but managed to win the competition, surprising everyone.

Putting Netherlands on the map, Ted van der Parre was crowned the World’s Strongest Man in 1992. Reports say that Ted was the tallest man to ever compete in the WSM contest, standing at mind-blowing 2.09 meters (6 feet 10+1⁄2 inches) tall.

As a man of many talents, Gary Taylor found great success in Strongman, winning the 1993 World’s Strongest Man. However, a knee injury during the tire flip event at the 1997 Europe’s Strongest Man contest, forced him to retire from the sport.

Also recognized from the TV screens having made 10 filmography appearances, Jouko Ahola brought two World’s Strongest Man titles to Finland in 1997 and 1999.

Along with his incredible strength, Ahola also boasted an impressive physique that included massive shoulders and shredded abs. However, he was the lightest man to win the WSM. Ahola was a 2x Europe’s Strongest Man as well.

The next man to take the title was Magnus Samuelsson from Sweden, who was the 1998 World’s Strongest Man. Apart from an incredible Strongman career, Samuelsson was one of the strongest arm wrestlers in the world.

Fun fact: Magnus Samuelsson won the Swedish version of “Dancing With The Stars” in 2009.

The first man to win the World’s Strongest Man in the 21st century was Janne Virtanen. Janne won five out of the six events in his qualifying group and obviously continued putting up amazing performances in the finals of the 2000 WSM.

Coming from a professional bodybuilding background, Svend Karlsen turned to Strongman and won the 2001 World’s Strongest Man. Svend set numerous powerlifting records prior to his Strongman career and earned his IFBB Pro card later on.

Mariusz Pudzianowski is a highly decorated strongman, and his most notable accomplishment is being the only person to ever win five World’s Strongest Man titles. He first achieved this feat in 2002, and he continued to dominate the competition by winning again in 2003, 2005, 2007, and 2008. Mariusz is known for his incredible speed and endurance, which have also served him well in his career as a Mixed Martial Arts athlete. Furthermore, he has won six European titles on top of the five he earned in the WSM.

Vasyl Virastyuk is one of few people who managed to win a WSM title while competing against Mariusz Pudzianowski, which happened at the 2004 World’s Strongest Man contest. The Ukrainian also got three second-place finishes at the Arnold Strongman Class, losing only to Zydrunas Savickas each time.

Phil Pfister was most notable for bringing the title back to the USA for the first time in 24 years. Pfister is also recognized for one of the most iconic moments in the history of Strongman.

This moment happened during the Hercules Hold event in 2001, as Phil told everyone that he would bring the WSM title back to the USA someday, all while in the middle of performing the event. Sure enough, five years later Phil achieved his goal.

One of the most memorable World’s Strongest Man editions came in 2009, as Zydrunas Savicas secured his first title. However, he would end up winning three more titles in 2010, 2012, and 2014. Having won multiple Arnold Strongman Classics and countless International contests, Big Z is considered as the Greatest Of All Time by many fans. Although Big Z continues to compete, he is no longer competing at the same level as before.

Despite Strongman being at its most competitive stage since the inaugural edition when Brian Shaw entered, he excelled at anything he set his mind to.

Like Zydrunas, Brian Shaw has four World’s Strongest Man titles, but his lifelong regret will be missing out on another one in 2010, when he settled for second-place. Brian’s four titles came in 211, 2013, 2015, 2016. He also won the Arnold Strongman Classic three times, which makes him one of, if not the greatest Strongman of All-Time. Brian is still competing and has his own elite competition called the Shaw Classic.

Eddie Hall became the first man to deadlift 500 kilograms (1,102.3 pounds) in 2016 and utilized the momentum to win the 2017 World’s Strongest Man. He narrowly beat Hafthor Björnsson, who had an opinion that Eddie’s win was not achieved in a proper way. When Hall heard about this, he felt disrespected and the bad blood between him and Björnsson was evident. This would result in a boxing match almost five years after, which Eddie lost on a unanimous decision.

After many years of trying and failing, Hafthor Björnsson finally managed to get his World’s Strongest Man title in 2018. However, his Strongman journey did not stop there, as Björnsson went on to set the All-Time Deadlift World Record of 501 kilograms (1,104.5 pounds) in 2020. Seeing that he broke Eddie Hall’s record by 1 kilogram (2.2 pounds), their relationship got even more heated.

Martins Licis, a very charismatic character who made his debut in 2016, quickly gained popularity among fans.

Licis would not have to wait long to get his hands on the title, as his convincing performance in the 2019 WSM was more than enough for victory. He is always amongst the top of the leaderboards, having both won the 2022 Arnold Strongman Classic and placed second in the 2022 WSM.

Despite being one of the smaller athletes in the roster, Oleksii Novikov managed to outperform everyone and win the 2020 World’s Strongest Man contest. He is still in the early stages of his career, but he has already won several major competitions, including the 2022 Europe’s Strongest Man.

The reigning and 2x World’s Strongest Man, Tom Stoltman, is the newest addition to the list of people who claimed the most prestigious title in Strongman. Tom is still relatively young for Strongman, so he has the opportunity to become the greatest to ever do it. Tom won his first WSM title in 2021, and successfully defended it at the 2022 WSM.

Apart from the WSM, Tom Stoltman is also the reigning 2022 Britain’s Strongest Man.

The 2023 World’s Strongest Man will take place on April 18-23, 2022, in Myrtle Beach, South Carolina. It will consist of three qualifying days, one day of rest, then two days of finals. The full list of events or lineups has not been released yet. However, it is already evident that a large number of athletes want to join the list above, so it is bound to be entertaining.

We are witnessing history in the making, and Tom Stoltman is the main protagonist of this story. After becoming the...