Lunsford continues to push himself in the gym alongside training partners like Kamal Elgargni. 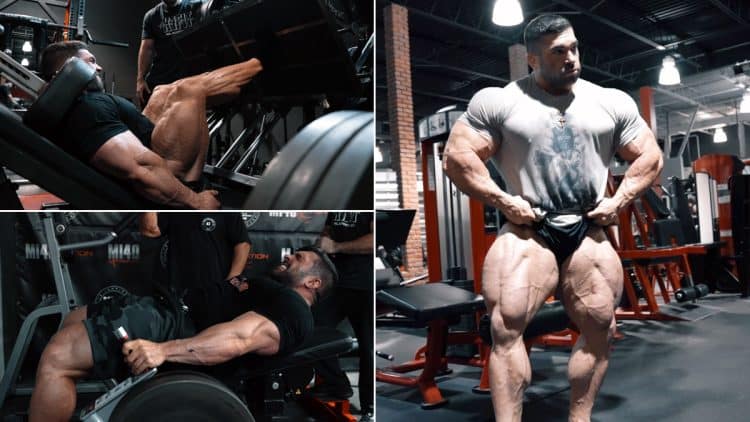 Derek Lunsford joined hands with Kamal Elgargni and Adam Brammer for a complete leg workout. Lunsford is an American IFBB Pro bodybuilder. He won the 212 Olympia title by defeating Shaun Clarida at the 2021 Olympia. Although he was expected to defend the title at the 2022 Olympia, his coach Hany Rambod raised concerns about his ability to make weight for the division. Lunsford received a special invitation to compete in the Men’s Open division at the 2022 Olympia.

Bodybuilding veterans like Samir Bannout predicted that Derek Lunsford can be a dark horse that shakes up the division. Lunsford brought a complete package to the 2022 Mr. Olympia. His dominant stage presence helped him achieve a runner-up spot behind Mr. Olympia Hadi Choopan. 4-time Mr. Olympia Jay Cutler analyzed Lunsford’s physique and opined that the Indiana native can beat Choopan in 2023 if he brings a fuller chest.

Lunsford announced that he will skip the 2023 Arnold Classic to improve his physique. He returned to the gym with a chest workout and recently joined hands with Kamal Elgargni for a leg day. Libyan IFBB Pro Kamal Elgargni won the 212 Olympia title in 2019. The 50-year-old tried his hand in the Men’s Open division and competed at the 2022 Tampa Pro and Texas Pro, finishing second and fourth, respectively. Elgargni was one of the favorites to win the 212 Olympia crown at the 2022 Olympia. He secured a third place behind two-time title holder Shaun Clarida and Angel Calderon Frias.

The elite bodybuilders trained with MI40 gym’s head coach Adam Brammer for a complete leg workout. So without further delay, let’s take a closer look at the detailed account of this training session.

Lunsford and company started the training session with the seated leg curls to work the hamstrings. This is also an effective exercise for warming up the knee joints. Lunsford stated that he starts all of his leg workouts with the leg curls. Additionally, seated leg curls ‘ feel perfect’ to the former 212 Olympia champion more than any other variation.

After cranking out some good sets of this exercise, Lunsford did a few forced reps to push himself further. Following this, the trio took to another variation of leg curls to stimulate the hamstrings more.

Lunsford, Elgargni and Brammer next performed the lying leg curls. They did three sets of this exercise unilaterally and followed them up with a couple of sets using both legs.

There are very few exercises that provide as many muscle and strength-building benefits as deadlifts. However, many different variations of deadlifts can be adopted for emphasizing different muscles. Stiff-leg deadlifts are one such variation that works the posterior chain muscles like hamstrings, glutes, and erector spinae.

“You don’t need to go that heavy on this exercise. I’ve done five plates of stiff leg deadlifts for like 12 reps. Is it effective? Of course. That weight counts for something but I’m just more focused on… This exercise for me is more for opening up the muscle fibres meaning the stretch is more important. It’s not so much about weight and the hard contraction on the way up. It’s more about slowing the movement down and stretching and creating more distance at the bottom and opening up more muscle fibers so that more blood can get pushed in, making it grow even more…” Lunsford said.

The trio cranked out some solid sets of this exercise and took to the next one.

The training partners next took to the leg press. The machine used for this exercise had independent weight carriages and two separate pressing platforms. Since both legs have to press the weight independently on this machine, it helps eliminate strength imbalances. The trio pumped some solid sets of this movement and jumped into another exercise.

This quad isolation movement followed the heavy compound movements next. Lunsford, Elgargni, and Brammer cranked out a few sets of leg extensions before jumping into the next exercise.

After working the major muscles like quads and hamstrings through the first few exercises, Lunsford and company targeted the muscles that many people ignore – glutes, adductors and abductors etc. They first did the hip thrusts on a plate-loaded machine next to target the glutes. After pushing through a few sets of this, the trio took to the next one.

Adductors are a group of muscles that help bring the legs together. Lunsford, Elgargni and Brammer performed hip adduction on the machine to stimulate these muscles.

Next up was the hip abduction machine. As opposed to the adductor muscles, the abductor group of muscles help move the legs away from each other. The trio got a few sets of this exercise under their belts and wrapped up the training session.

After his historic performance at the 2022 Mr. Olympia, Derek Lunsford has all the momentum he needs heading into the new year. The former 212 Olympia champion is confident that he is one step away from winning the Mr. Olympia crown. If he continues to maintain intensity and make improvements, 2023 might be the year he takes that final step and becomes Mr. Olympia.