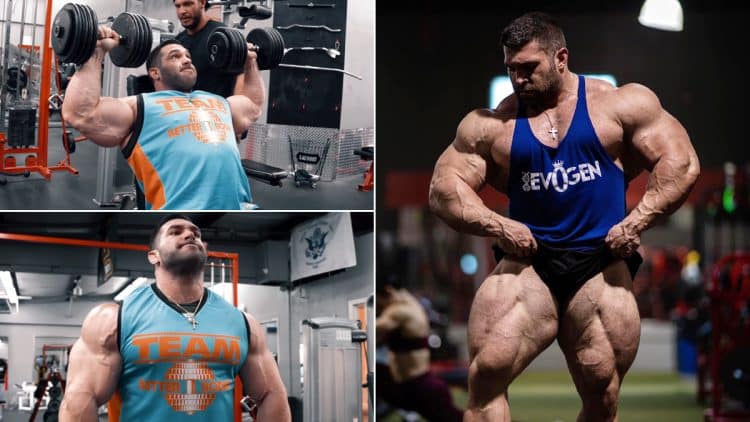 Derek Lunsford is training with intensity and determination to make his Men’s Open division debut at the 2022 Olympia a memorable affair. Lunsford is the reigning 212 Olympia champion and has competed in the 212 division since earning his IFBB Pro card. The 29-year-old remained in the top five of the 212 Olympia roster for half a decade before finally dethroning former champion Shaun Clarida at the 2021 Mr. Olympia. While he would have entered the 2022 Olympia as a defending champion, Lunsford’s coach Hany Rambod and Olympia president Dan Solomon raised concerns over his ability to make weight for the division.

The reigning Olympia 212 champion entered the competition prep for the 2022 Olympia back in August, but there was ambiguity surrounding the division he would be competing in. However, the Olympia management accepted his special invitation request to compete in the Open division. This development received mixed responses from the bodybuilding community. Bodybuilding legend Samir Bannout opined that Lunsford has the potential to crack the top five while fellow bodybuilder Iain Valliere took issue with there being ‘no effort to qualify’.

The former 212 division competitor has since ramped up his training with a renewed vigor to prove his worth against the big guys. Recently, he went through a shoulder workout as part of his competition prep and shared some insightful tips. So without further delay, let’s take a closer look at the training session.

Lunsford warmed up his shoulders and rotator cuffs with a few resistance bands and dumbbell movements before delving into the main workout. We all know the importance of warming up the muscles before every workout. However, many of us avoid it anyway. Lunsford shed light on how warm-up affects his workouts, especially on a shoulder day, and said:

“If I don’t warm up my shoulders on a shoulder day, I don’t have any injuries or anything like that. I just tend to not have as good of a workout… like it pinches some areas. So I am not able to go as heavy or as intense. But when I warm up, I’m just fine! Helps me get a better range of motion, push heavier weights, and I just feel better. Not just during the workout but afterward too.”

Lunsford further stated that these warm-up routines aim to get the arms and shoulders moving so he does not use heavy weights or complex movements for these exercises.

The Indiana native started the shoulder routine with free weights and targeted the lateral delt head with this movement. He cranked out a few sets with incrementally heavy weights and maintained the 8-10 rep range.

“I could definitely do more if I was just throwing them up and letting them drop. But I was trying hard to hold it at the top. I wasn’t holding it but kind of pausing it and slowly letting it down,” Lunsford said after the working sets.

After setting the PR for lateral raises, it was time for the seated dumbbell shoulder press. Like other exercises, the traditional dumbbell shoulder press has many variations. The seated variation eliminates the need to stabilize the upper body and helps focus on the target muscles — anterior and lateral deltoids, pectoralis major, and triceps. Lunsford performed a few sets of this movement with slow and controlled motion and jumped into the next exercise.

The reigning 212 Olympia champion next took to the plate-loaded machine variation of the same exercise. One of the biggest pros of using machines is that they eliminate the need to control the weights as they move along a fixed trajectory. As a result, it is possible to lift heavier weights in this exercise as compared to the free weight variation of the same movement. While speaking about his preferences, Lunsford said:

“Maxing the machine out. I’m already doing more weight than I was with the dumbbells, and I feel so much better. I think it’s important that you do both (machines and free weights). As a bodybuilder, I don’t think the only thing you need to do is free weights. I think free weights come into play. You’ve got to do it. But I don’t think it’s the end-all, be-all.”

An old-school thought process says that working with free weights is a more natural and beneficial way of training as it mimics real-life scenarios. However, Lunsford debunked this myth and said:

“If you’re doing an exercise that gives you pain and it’s not good pain. You’re not able to stimulate the muscle well because of the pain, you’re really just working against yourself. You’re gonna put yourself out of the gym or you’re not even going to get anything out of that workout anyway.”

Lunsford advised doing the exercises that best target your muscles and not something perceived to be a better exercise.

After performing a few sets of machine shoulder presses with incrementally heavy weights, Lunsford took to a superset to annihilate his delts.

The barbell front raise is a compound movement that predominantly targets the anterior and lateral deltoids. Lunsford superset this exercise with barbell upright rows.

Instead of performing full sets of each movement, Lunsford started every set with front raises and switched the exercise mid-set to finish with the same number of upright rows. In a couple of sets, he alternated between the barbell front raise and upright row with each rep.

Lunsford next took to a posterior delt movement to target this muscle group. The posterior delts are difficult to activate directly through other shoulder exercises, and it is important to incorporate specific movements in your shoulder routine to develop them. The 29-year-old performed a few sets of this movement with a neutral grip and switched to the pronated grip for the last couple of sets.

This is a simple movement that everyone can do, irrespective of their experience level, to develop the rear delts. Since this exercise uses a cable machine, it keeps the rear delts under constant tension throughout the movement and helps maximize hypertrophy.

The 29-year-old wrapped up his training session with this movement. Dumbbell shrugs primarily target the trapezius muscles. However, they also activate the rhomboids and forearms. With practice, this movement helps improve grip strength which can transfer well to heavier lifts like the deadlift and bench press.

Lunsford did a few sets of this movement and called it a day.

The Men’s Open roster at the 2022 Olympia will be stacked with high-caliber contenders that will attempt to dethrone the reigning Mr. Olympia champion Mamdouh ‘Big Ramy’ Elssbiay. The Egyptian ace is hulking at a massive 337.7 pounds in his most recent physique update, making it a steep uphill climb for everyone trying to get ahead of him.

However, as seen at the guest posing of the 2022 Pittsburgh Pro, Lunsford has size parity with Open division bodybuilders like Hunter Labrada, Nick Walker, and former Mr. Olympia Brandon Curry. If he continues to grow and adds more detail to his physique, Lunsford definitely has the potential to secure a top-five finish at the 2022 Olympia, scheduled for Dec. 15-18 in Las Vegas, NV.

You can watch the full workout video below, courtesy of Derek Lunsford’s YouTube channel: