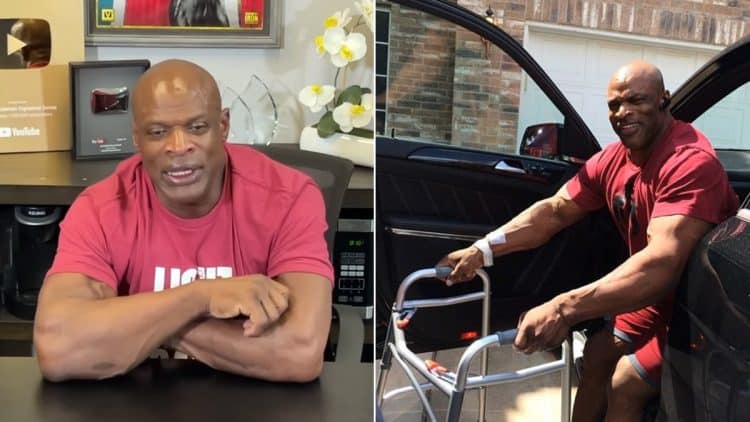 Ronnie Coleman ascended to the top of the IFBB Pro League with remarkable size and conditioning, which came at a heavy cost. During a recent Q and A, Coleman discussed when he plans to walk again without assistance before sharing that he and Lee Haney will attend the 2022 Mr. Olympia show in 9 weeks.

“Mostly, I use the chair for long distances and I’m working real hard on it [walking without a wheelchair],” Ronnie Coleman said.

Bodybuilding legend Coleman established himself in the Men’s Open division decades ago. He managed to win the prestigious Olympia title eight times consecutively, a feat he accomplished in large part due to his muscularity and work ethic. Even his successor, four-time Olympia winner Jay Cutler remembers how difficult it was to keep up with Ronnie during his prime.

As a result of his intense training regimen, Coleman suffered a herniated disc in 1996. However, a litany of health issues plagued his life as he ended up needing a total of 10 back surgeries. These botched operations eventually led to him being unable to walk without assistance.

Despite his inability to walk without help, Coleman never uses it as an excuse inside the gym. He trains to this day and his workouts continue to inspire. The former Mr. Olympia left the bodybuilding community in awe a few months ago when he demolished calf raises even though his feet were completely numb. While Coleman still struggles to get around without a walker/wheelchair, he believes that could soon change.

In his latest YouTube video, Coleman discussed his stem cell treatments and said he hopes to walk soon.

“I’m working real hard on that. Right now, I’m going to Mexico every four months, getting these stem cell treatments — and they are working out real good. So, when will I walk without a chair? Only time will tell, but hopefully soon and very soon!” Ronnie Coleman shared.

This isn’t the first time Coleman updated his fans and followers on his stem cell treatments. Last year, he put on 30 pounds of mass since adopting the new plan and explained that fewer surgeries have helped him retain the added size.

Some in the community, most notably, former 1983 Olympia winner Samir Bannout says it ‘hurts him a lot’ to see Coleman not looking healthy like four-time Mr. O Jay Cutler. While he appreciated Coleman’s knack for lifting heavy weight, he believes it came at a cost. Bannout added that Coleman would have benefited greatly if there were ‘boundaries’ put in place throughout his tenure.

After touching on his health, Coleman revealed that he will be front row at 2022 Olympia with Lee Haney, who is the only other bodybuilder to hold eight Olympia titles.

“Yes sir. Me and Lee Haney will be there again on the front row watching. I hope to see you there,” Ronnie said.

Coleman gave his thoughts on who is a better bodybuilder between Kevin Levrone and Phil Heath. Given that Heath acquired seven Mr. Olympia titles, Ronnie sees this question as self-explanatory.

“He’s asking who is better, Kevin Levrone or Phil Heath. Well, that should be self-explanatory since Phil Heath is a seven-time Mr. Olympia and Kevin is a zero-time Mr. Olympia. Yeah. Yeah. I think he got him all day, every night, all morning, and afternoon.”

In anticipation for 2022 Olympia, Coleman continues to discuss the Men’s Open lineup. In addition to saying that the top three won’t change from last year (2021), Coleman is so confident in Big Ramy, he congratulated the reigning champion on his third title. Moreover, Coleman has suggested that Big Ramy will hold on to his crown for the next three or four years.

While Ronnie is quite sure of Ramy’s abilities, he mentioned that rising contenders Nick Walker and Derek Lunsford are wild cards ahead of 2022 Mr. Olympia. Walker, who recently rejoined his former coach Matt Jansen, is ramping up his contest prep for his second-ever Olympia show.

Additionally, all eyes are on Lunsford after accepting a special invitation from Olympia brass to compete in the Men’s Open at 2022 Olympia. This came after Derek and his coach Hany Rambod began to question the safety of Lunsford making weight for the 212 division. While they haven’t confirmed Lunsford will compete in the Open this year, most in the sport believe that’s what’s on the horizon.

Coleman will continue prioritizing his health in retirement and looks forward to seeing the Men’s Open competitors wage war in Las Vegas. Despite his struggles, fans can expect to see Coleman at 2022 Mr. Olympia with Lee Haney later this year.

Nick Walker Lays Out Goals for Bodybuilding Career: ‘I Want to Win As Many Arnolds and Olympias As I Can’