Krizo looks noticeably more ripped since earning his pro card at the 2022 Amateur Olympia Italy contest a few weeks ago. 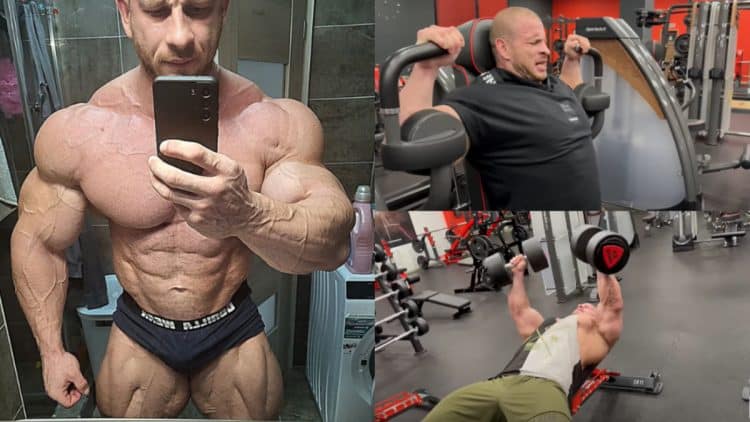 Michal Krizo continues to eye 2022 Mr. Olympia but first, he must win a Pro qualifier. The mass monster recently shared an impressive physique update and chest workout days before his first Pro show at the EVLS Prague Pro on October 29, 2022.

Fans and bodybuilders alike quickly took notice of Krizo’s imposing physique after he made the switch from the IFBB Elite Pro League to the NPC. From there, he traveled to the U.S. to visit some of the sport’s most respected figureheads. Krizo met with Milos Sarcev at the Dragon’s Lair first, leaving the veteran astounded by his roundness and muscularity.

Next, Krizo had the pleasure of posing in front of the four-time Mr. Olympia winner Jay Cutler. The bodybuilding legend’s first impression of Krizo blew him away. In addition to labeling the 32-year-old as dangerous, Cutler shared that Krizo’s shoulder development reminded him of seven-time Olympia kingpin Phil Heath‘s.

Part of Krizo’s 2022 Olympia plan involved him earning an IFBB Pro Card, a feat he accomplished handily last week. Throughout the season, Michal has suggested all along that he intends to qualify for Olympia this year by claiming the title at the 2022 EVLS Prague Pro. In one week, he’ll let his physique do the talking, but for now, he’s crushing a chest workout in prep for his Pro debut.

Find a full list of exercises used in Krizo’s video below:

After the taxing chest workout, Krizo provided fans with a physique update. Judging from the package he brought to the Amateur Olympia Italy contest, it looks like Krizo has made considerable improvements to his conditioning, especially in his mid-section.

Despite his newcomer status in IFBB Pro League, Krizo has a history with a few high-profile Men’s Open competitors. In 2017, he participated in an amateur contest against Blessing Awodibu.

Looking back, Krizo shared that he had less experience and still almost beat “The Boogieman.” While Awodibu was victorious in their amateur affair, Krzio has made it clear that he’s a level ahead of Blessing now. Since earning his Pro card, Awodibu has welcomed Krizo into the ‘ass whooping league.’

In addition to Awodibu, Krizo also has a history with Nick Walker. Following Waker’s 2021 Arnold Classic victory, Krizo gave Nick props for his conditioning but dismissed him as a legitimate rival because of a lack of symmetry.

Given their freakish size, (especially their arms), others in the bodybuilding community have discussed a potential showdown between Krizo and Walker. The latest was 1983 Mr. Olympia Samir Bannout. He suggested that Michal Krizo has bigger arms and a better v-taper than Walker despite having yet to make his IFBB Pro debut.

Krizo’s focus is on winning a Pro show, but that hasn’t stopped him from discussing his future in the sport. He revealed that his plan is to get as big as possible, before taking his talents to 2022 Olympia. Assuming he wins his IFBB Pro show in one week, Michal believes he will place in the top ten at Olympia this year, and then ‘at least’ top 6 next year (2023).

RELATED: Bodybuilder Michal Krizo Reveals Every Meal He Eats in A Single Day

It’s been a busy few months for Krizo. Given the intensity of his latest training session, fans are excited to see Michal face off against other professional bodybuilders in one week.