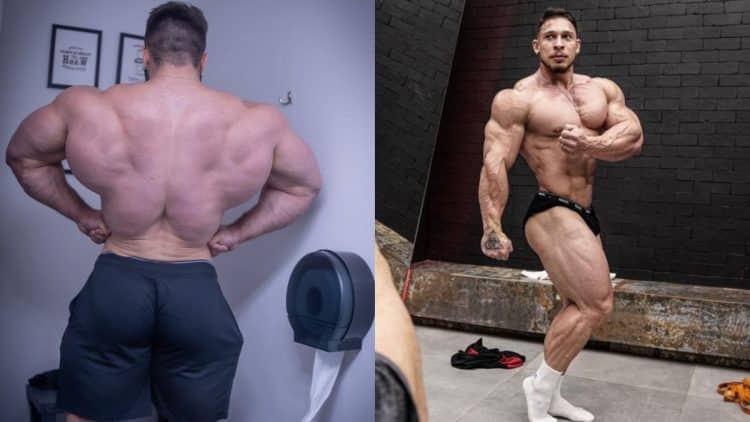 Men’s Open bodybuilder Regan Grimes and Classic Physique competitor Ramon Dino have both been working hard in the gym in preparation for the upcoming 2022 Olympia competition. In a recent post made on Instagram, Grimes revealed that he is tipping the scales at 290 pounds, the highest he has been. Ramon shared a physique update as well, performing a posing routine.

The Men’s Open division has gained popularity by hosting some of the freakiest mass monsters in the world, and rising prospect Regan Grimes is no exception.

Grimes began his journey in the IFBB Pro League in 2017. While he was unable to secure a victory at the three shows he competed in that year, Grimes brought a showstopping package to the 2018 New York Pro. After winning the title, he took his gigantic physique to the Mr. Olympia stage the same year and finished eighth.

In March, Regan announced that he would be taking time off from shows to prepare his physique for the upcoming 2022 Mr. Olympia. His decision came after he placed seventh both at the 2022 Arnold Classic and the Boston Pro.

Brazilian bodybuilder Ramon Rocha Queiroz gained popularity for his aesthetic physique in 2021. The rising prospect took home second at the Europa Pro Championships. Following the victory, he decided to take his talents to the biggest stages in the sport at Mr. Olympia. He managed to break into the top five and got placed fifth in the last year’s edition of the contest.

Ramon is respected for his dedication to keeping a high level of fitness year-round and looks to have made improvements to his physique. He shares regular physique updates with his fans and has emerged as one of the strongest new contenders in Classic Physique.

In a recent post made on his Instagram, Regan shared that he has bulked up to 290-pounds, the highest he has ever been, in preparation for the 2022 Olympia.

“Biggest I’ve been by far! 290+ time to shred it down for the @mrolympiallc.”

Regan can be seen doing a gigantic lat spread pose from the back. He appears to have gained a lot of muscle mass while maintaining an aesthetic narrow waist.

Grimes had partnered up with Classic Physique competitor Logan Franklin for a taxing arm workout under the guidance of legendary bodybuilder and coach Milos Sarcev. If the recent physique update is any indication, Regan will pose a serious threat to his competition at the upcoming Olympia.

Ramon Dino shared a recent physique update, where he looked to be in excellent conditioning as he performed a posing routine for his fans ahead of the 2022 Olympia.

Ramon did a series of poses highlighting his arms. He looks almost ready to step on the stages, with more than three months left until the competition. Dino’s huge biceps and impressive back muscle development were some of his strongest features.

Compared to the insanely ripped physique Ramon Dino showed off just weeks out from the Arnold Classic in February, he looks like he packed on the pounds to bring an improved package to the biggest bodybuilding show of the year at 2022 Olympia in December.