Get in the best shape of your life with Hart's transformation program. 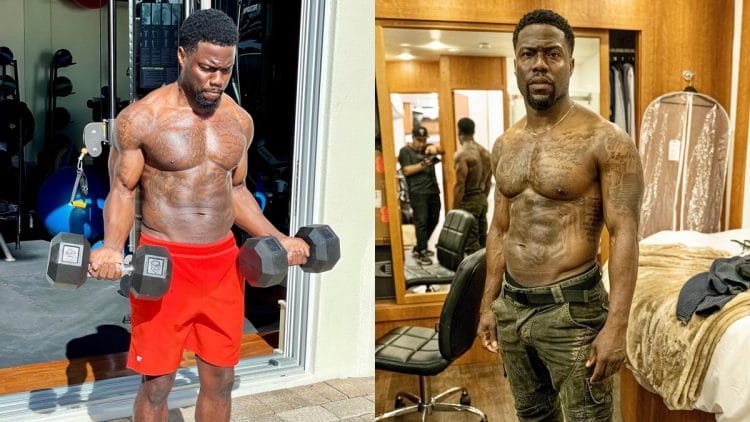 Kevin Hart is one of the most famous and beloved comedians in the United States. You probably already knew that — what you may not realize is that he is also a devoted workout warrior. Kevin’s love of fitness and exercise has created on his 5’4″ frame a physique that many professional athletes have come to appreciate.

In this article, we uncover the type of training and diet that Kevin follows to maintain his lean, athletic body and stay in top shape.

Kevin Hart was born on July 6, 1979, in Philadelphia, Pennsylvania. Kevin was raised by his mother — a systems analyst at the University of Pennsylvania. His father was a cocaine addict who spent much of Kevin’s formative years behind bars. Kevin has an older brother named Robert.

Kevin attended George Washington High School. After graduation, he attended the Community College of Philadelphia but dropped out and moved to New York. Hart then moved to Brockton, Massachusetts, where he took up a job as a shoe salesman. It was at that time that he began performing stand-up comedy.

Kevin’s first stand-up comedy experience was at the Laff House in Philadelphia, where he was billed as Lil Kev. Things didn’t go well. But he persevered. In his formative stand-up comedy years, he was frequently booed off stage, with a piece of chicken thrown at him on one occasion.

Audience reception to Kevin’s performances began to improve after they realized that he didn’t have to try and imitate other comedians like Chris Tucker. He developed his unique brand of comedy in which he drew upon his personal life experiences and insecurities.

Kevin’s film and TV career began with an appearance on the sitcom Undeclared in 2000-2001. His movie debut was in 2002’s Paper Soldiers. Throughout the 2000s, he appeared in such films as the Scary Movie franchise, Soul Plane, The 40-Year-Old Virgin, Death At A Funeral, and Little Fockers.

In 2015, Kevin starred with Will Ferrell in Get Hard. The following year he appeared alongside Dwayne Johnson in Central Intelligence. Hart produced his first film in 2018, that being Night School. That year he also signed a deal with Nickelodeon to develop live-action children’s content for the network.

In August 2016, Hart married Eniko Parrish. They have two children together. Hart also has two children from a previous marriage.

On September 1, 2019, Hart was a passenger in a vehicle that went off the road and rolled down a hill off Mulholland Drive in Los Angeles County, California. He suffered major back injuries and spent 10 days in the hospital.

Kevin has always followed a healthy eating plan. Since the early 2000s, he has cut back on dairy products. Then, in 2019, he made the switch to being a vegan. However, to meet his daily protein requirement, he does occasionally eat chicken wings.

Kevin made the transition to plant-based eating gradually. He gave up red meat many years before making the total switch. Here is his advice for anyone thinking of switching to a plant-based diet —

“Don’t think you gotta do it all in one day. You gotta make it work for you.”

Being a mega-rich movie star, Hart can afford a personal chef, which is good for him since he admits to being hopeless in the kitchen. Kevin makes sure that his daily caloric intake includes plenty of clean, meat-free protein. His breakfast typically consists of scrambled egg whites, along with avocado toast for a healthy dose of fiber and omega-3 fatty acids.

For lunch, along with a green salad, Kevin often eats a meatless patty. He usually eats a very light dinner. It’s not unusual for him to only have a salad for dinner. Kevin enjoys snacking on fruits and nuts. He does not eat much bread.

Must Read: Brandon Curry Shares His Bodybuilding Diet For The Mr. Olympia Prep

Kevin Hart is an early morning workout guy. He typically hits the weight at around 5 am. He usually trains six days a week but will take a training lay-off every eight weeks or so. Training early allows him to get his workout in regardless of how busy his schedule gets.

Kevin loves to do circuit training, where he moves through a series of 10 exercises in a row with very little rest between them. After completing a circuit, he will rest for a couple of minutes before going through the cycle again. He completes three rounds of the circuit.

Kevin is not your typical banging and clanging gym junkie. He has a more holistic view of training and loves to include running, jumping, and CrossFit training into his routine. His approach to combining aerobic and anaerobic training has allowed him to build a very athletic-looking physique that isn’t too bulky.

Kevin has a fitness series on YouTube called What The Fit. In many of his movie roles, Kevin has not had to rely on his physique. However, for his upcoming sci-fi action comedy Borderlands, he had to ramp up his training to get in top shape. Hart plays a soldier in the movie. To nail his look, he trained with Navy Seals.

As you are about to discover, Kevin follows a heavy training schedule. To ensure he gets the rest and recuperation he needs, he prioritizes sleep. Kevin gets to bed at the same time every night and gets an average of 7.5-8 hours of slumber each night. To hit the gym at 5 am, he needs to be up at 4:30 am, meaning — he goes to bed no later than 9 pm on most nights.

Check Out: Kevin Hart’s Physique Is No Joke After Training With Navy SEALs

Kevin does a 10-exercise circuit for arms and core, doing three rounds of the circuit.

On Tuesday, Kevin goes for a five-mile run. He usually starts and finishes with dynamic stretching.

Kevin does an eight-exercise circuit for the back and biceps, doing three rounds of the circuit.

On Thursday, Kevin changes things up by doing a CrossFit Workout of the Day. He loves to run through the military Hero WODS that honors fallen servicemen and women. Here are four of his favorite WODS, which he runs through over the course of a month.

Kevin does an eight-exercise circuit for the back and biceps, doing three rounds of the circuit.

Saturday is another HERO CrossFit day for Kevin. This time he rotates the following six HERO workouts …

If you’ve got a twenty-pound vest or body armor, wear it.

Then, 12 minutes to complete:

On Sundays, Kevin gives his body some much-needed rest and recuperation. He doesn’t do any exercise at all.

Kevin owns his supplement line, called VitaHustle. “I believe we all have a next-level inside of us,” says Hart while talking about his supplement brand. “I created VitaHustle ONE to fuel your body right — to bring out your best and get your game strong.” Kevin takes four supplements daily, including —

Kevin Hart is undoubtedly one of the funniest guys around. But behind the laughter is a heck of a lot of discipline and commitment to his fitness and health.

For someone as busy as Hart, taking the time to train six days a week is nothing short of inspirational. Channel the motivation into your own fitness journey. Best of luck!

Ten Ways to Boost Your Deadlift