Speaking with Jay Cutler, seven-time Olympia Phil Heath reflected on his disciplined use of PEDs throughout his bodybuilding career. 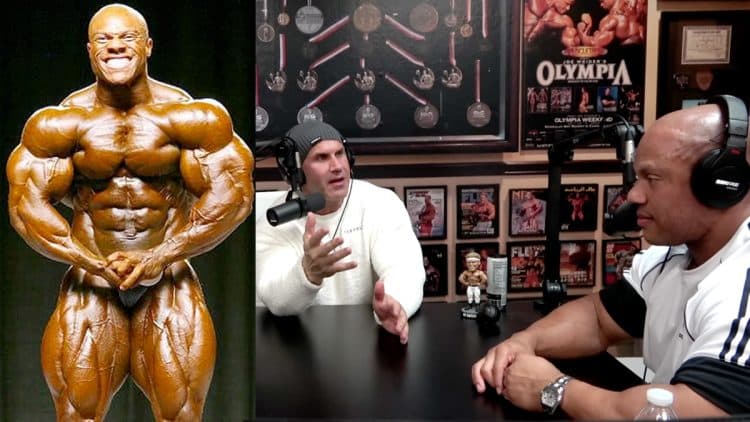 Bodybuilding legend Phil Heath joined Jay Cutler for a candid conversation regarding his diet, work ethic, and performance-enhancing drug use. On the latest Cutler Cast episode, Heath shared that he never heavily abused PEDs and argued that competitors today have become too reliant on drugs before shows.

During Heath’s illustrious career, he was crowned Mr. Olympia seven times consecutively and, in the process, tied Arnold Schwarzenegger’s record of seven Sandows. Having shared the stage with countless legends like Jay Cutler, Dexter Jackson, and the late Shawn Rhoden, Heath showcased jaw-dropping fullness and conditioning en route to cementing his name as one of the best in the IFBB.

Heath finished third at 2020 Olympia, which was the last time fans saw him compete on stage. However, ‘The Gift’ has teased a return ever since. In fact, back in November, Heath promised something ‘fuc**ng crazy’ for 2023. Despite speculation about a bodybuilding comeback, Heath announced that he would commentate at the 2022 Olympia show instead of competing.

In his spare time, the former Mr. Olympia has been open about his PED use. Heath offered details regarding his ‘optimal’ bodybuilding cycle while away from the stage recently. And to expand on the topic, he joined fellow Olympia winner Jay Cutler to discuss steroids in bodybuilding and how the practice is starting to affect performance.

According to Heath, he started dabbling with PEDs after competing naturally.

“I’m just going to say it here: I was never pushing PEDs like right away. I was competing naturally and beating guys that weren’t. When I met you – that picture – when I show people that picture, they’re like, ‘what kind of stuff were you on.’ Like do you really want to know what the fu** I was eating. That’s the difference. I have those genetics.”

He credits running and playing sports for helping him reach the height of his career.

“I do think playing Division I basketball and running all the time and doing all that work — the stimulation of being a defensive — like I was always in the defense. Imagine being in a squat like a defensive stance non-stop.

We do that for a bodybuilding show being in that same stance doing lunges and all that. I think bodybuilding was the perfect sport but my skin texture is what people don’t realize — that’s what really set me apart from everybody and the person who said that was the late Peter McGough” says Phil Heath.

During his tenure, Phil was known for having incredibly thin skin, which complimented his physique’s strengths. He added that today’s athletes are sacrificing detail and striations because of shot injections.

“As you start training, you’re like wait a minute, ‘I can do that now.’ You can see through it. The guys today don’t have that probably because of shot injections, probably because of their training, but as far as the poundage — I never got intimidated by watching someone like yourself or Ronnie [Coleman] thinking that that’s what I have to do to be champion.”

Phil never pushed himself to lift heavy weight, instead he learned how to effectively move the weight while maximizing muscle stimulation.

“I never benched more than 500 pounds ever. I never did 200 pound anything not even rows. I tried that shit and my lat felt like it was going to tear off. It just didn’t apply. But I knew also how to stimulate a bicep curl using 50s better than anyone in the industry. I knew how to do that. I always looked at it like if I was going to game-ify lifting weights.

Meaning basketball players shoot free throws, bodybuilders, we curl or whatever. At what percentage are you doing it perfectly. How many guys do you see online, like wow, it looks good on YouTube but you see no fibers in there. But if I did half that shit, you would see fibers in there because I’m perfecting the weights every time,” Phil Heath said.

Heath: Guys Today Don’t Have The Confidence To Stop Injecting A Week Before Olympias

Phil explained that bodybuilders are ‘blurring lines on their physique’ by using heavy amounts of PEDs leading up to shows like Olympia.

“Well [heavy PED use] is going to thicken the skin. You’re literally putting an oily substance in your body. We all know, getting ready now, there’s probably some dumb ass doing some injection this week [for 2022 Olympia] and they’re going to blur out the lines in their physique. We all know this because they don’t have the confidence of pulling that stuff out weeks before because in their mind — I hate to say it, but they’re an abuser of drugs.”

“If they stop, they’re going to shrink. Well guess what, you don’t really have muscle then. You have blown up inflammation. You have a bad inflammatory response that could actually be making your organs not work correctly to dry out naturally. That’s why I didn’t have to do certain extremes and stuff like that.”

Given the mass he’s carried since stepping off stage, many fans have called on Heath’s return. His coach, Hany Rambod, recently gave his thoughts on the matter. Rambod acknowledged that Heath has the mindset, the genetics, and the work ethic to make a comeback, but said it would be difficult to win an eighth Olympia title.

Heath believes some bodybuilders have become drug abusers because they can’t limit their use leading up to shows. While PEDs certainly have a place in bodybuilding and other sports, Heath is adamant athletes are relying on them too heavily today.