No Result
View All Result
Profiles
Evidence Based
Evidence Based Research
This article was written by one of our qualified writers, and fact-checked by our experts. The numbers in parentheses (e.g. 1, 2, 3, etc.) throughout the article, are reference links to peer-reviewed studies.
Our team of experts include a board-certified physician, nutritionists, dietitians, certified personal trainers, strength training experts, and exercise specialists.
Read Our Editorial Process

Decoding the mystery, that is Victor Richards. 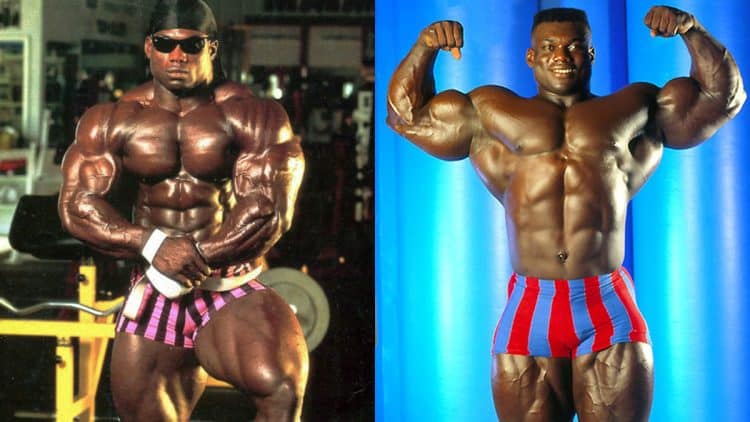 Victor Richards is a Nigerian-American bodybuilder. He is arguably the most popular amateur bodybuilder who never turned pro. Many fans believe that Richards had the best physique of his time. It’d be safe to say he is one of the most controversial bodybuilders of all time. Although Richards qualified for the IFBB League, he never competed in a pro show. This is his complete profile, biography, training regimen, diet plan, and more.

Being true to his enigmatic self, Victor Richards has never cleared up confusion about his birth date and place. He was reportedly born in San Diego in 1964. On the other hand, in some interviews, he claimed to have been born in Nigeria in 1966 or 1967. However, he never clarified when he moved to the United States.

Vic’s father was Nigerian, and his mother was Bahamian, and both encouraged him to take up sports when he was a child. He started weight training at the age of fifteen to improve his football, wrestling, and track performance. Notably, Vic already weighed 210 pounds when he began lifting weights.

“Victor Richards did not find bodybuilding; bodybuilding found him,” claims his website. Two years into training, Richards had put on significant size and started training at the mecca of bodybuilding—Gold’s Gym Venice Beach, where he met his mentors David and Peter Paul, the “Barbarian Brothers”.

“My calling in this sport was NOT to win titles and compete. I had an experience with bodybuilding, unlike many other people who train. I took it beyond the physical and mental—to a spiritual experience. Just as the synagogue is to the Rabbi, the Vatican to the Pope; the gym was my spiritual ground.”

Eight months under the Barbarian Brothers helped Richards improve his physique significantly. He tipped the scales at 225 pounds, which made him believe he was ready for his first bodybuilding show, The American Cup. The budding bodybuilder won the teenage heavyweight class and placed runner-up to Rich Gaspari in the overall category.

Victor reportedly weighed 240 pounds when he was 18 years old. His next competition was the Teen Los Angeles, where he won both the heavyweight division and overall title.

In his prime, Victor Richards was a bodybuilding judge’s fantasy—a tight waist, broad shoulders, gigantic thighs, slender waist—a perfect X-frame, if you will.

However, what happened next changed Richards’ perspective on competitive bodybuilding forever. Vic entered the Orange County Muscle Classic two weeks after winning the Teen Los Angeles only to be beaten by a guy who placed fourth at the previous show.

This loss shook Richards’ belief that bodybuilding shows were honest, fair, unbiased, and had no political influence. He nonetheless continued competing in hopes of advancing his bodybuilding career.

At 19, Richards next competed at the 1984 California Gold Cup Classic while weighing 245 pounds. Vic dominated the show to win the heavyweight and overall title.

After winning the show, Vic’s trophy fell to pieces in the parking lot. This incident was symbolic for Richards as he realized his competition was with himself and not others and gave up his quest for more trophies.

Victor Richards catapulted into international fame when he was featured in a 1987 edition of Muscle & Fitness, where he claimed in an article that he was the world’s largest bodybuilder (at over 300 pounds). Plus, rumors had it that his legs measured 35 inches at 21 years old.

While the M&F article got him attention, it also put pressure on him to turn pro and prove his mettle by competing in the IFBB with the big boys.

Since Richards held dual citizenship, he decided to earn his IFBB Pro card by winning the 1992 Nigerian Championships, which he did. However, he never competed again.

There are many conspiracy theories explaining why he never competed again. Many fans believe that although Richards had the size, he could never cut down to go head-to-head with the peeled elite IFBB bodybuilders at the Olympia stage. On the other hand, some believe that he had a sour relationship with the then IFBB head, Wayne DeMilia, that kept him from competing. However, Richards did something unlike him by coming forward and shedding a light on the situation. He said:

“To let a panel of judges determine my worth when I wasn’t doing this for anyone other than myself seemed crazy to me. I also knew that if I was competing and taking endorsements that my voice would try to be silenced.”

Although Richards decided to never compete again after the 1992 Nigerian Championships, he decided to embarrass the then Mr. Olympia champ, Dorian Yates, by gatecrashing his guest posing routine at the 1994 FIBO, Germany.

Furthermore, Richards asked the announcer to introduce him as the “The natural uncrowned Mr. Olympia” while Yates was still posing on stage. Bodybuilding pundits believe Vic did what he did to hurt the reputation of the IFBB and its athletes, something the federation did not take lightly. It is believed that DeMilia banned Richards from guest posing at IFBB shows in the US after this incident.

In the pro bodybuilding circuit, bodybuilders like Shawn Ray, Kevin Levrone, and Flex Wheeler are referred to as uncrowned Mr. Olympias as they got into striking distance of winning the Sandow multiple times but could never seize the throne. However, Richards is a self-styled “Natural uncrowned Mr. Olympia,” a title exclusive to him.

“My goal is not to win trophies or the Mr. Olympia. If I win Mr. Olympia, that’s fine. If I don’t, that is not going to decide my success.

My ambition is to be the best I can be and to leave my footprints in the history of the sport. Bodybuilding is a stepping stone for me to get my message across.

I feel I can change the world. The number one disease we have, especially in this nation, is racism. I’d like to travel the country teaching kids to judge people by their character, not their color.”

Vic was known for training hard and heavy. He stuck with the conventional bodybuilding exercises and did not try to do anything fancy in the weight room.

Richards followed a six-day training split and took one day off to allow his muscles time to rest and recuperate. This is what his training regimen looked like:

Friday: Back and Calves

To ensure he’s hitting his goals for muscle growth, Victor Richards performs more biceps exercises on Saturday and throws in a shoulder workout as well.

Richards utilized the last day of the week to work on a lagging muscle group.

“I can do 200 pounds on a dumbbell press. I’ve done shoulder presses in the range of 450 pounds; squatted nearly 900 pounds, and I’ve done barbell curls up to 315 pounds. And I never liked using a belt or knee wraps.” — Richards in an interview in the 1980s

Richards followed a balanced approach. He believed that the sport of bodybuilding should promote overall health and wellbeing. He sounded alarms about drug use and other ill practices plaguing the sport back in the 1980s and 90s, something other Hall of Famers have started doing in the last couple of years.

“In current bodybuilding, I dislike the kamikaze attitude to get ripped at all costs. I don’t love bodybuilding enough to sacrifice my life for it. If these kamikaze guys are thought to be smart or intelligent, I’d rather be to be thought of as foolish.” — Victor Richards in the 1990s

Check Out: 21 Bodybuilders Who Died of Heart Attack

Here are a couple of controversies Vic was involved in:

On Greg Kovacs’ claim of being the biggest bodybuilder:

Richards cut through his competition like a knife whenever he was questioned about his claim of being the biggest bodybuilder in the world. In one of his interviews, Richards had this to say about Greg Kovacs being the largest bodybuilder:

“I’ve met Greg Kovacs, and he seems like a nice and polite individual. I do not think Greg believes that he is the largest bodybuilder in the world, even if magazines promote him that way. Greg Kovacs is six-foot-four and weighs 280 pounds in shape. Off-season, he towers at about 350 pounds, with half of that weight in his gut and hips. I am five-foot-ten inches tall and often reach 320 pounds in shape and 360 to 370 pounds off-season. Do the math: 40 more in-shape pounds with 6 inches less height. My biceps and triceps dwarf Greg’s. My chest and pecs make his look like a bird. Let’s not even mention my back, calves, hamstrings, and thighs. I am not arrogant but sincere. So when Greg claims to be the “Largest Bodybuilder on Earth” he might be claiming his guts and hips. You see, the mice will play when the cat is away.”

In late 2021, a news outlet broke the news of Vic’s passing. However, the bodybuilder later quashed the rumor by posting an update on Facebook.

“I’m sincerely sorry for the pain and heartache enemies have caused you through their venomous tongues. I did not mean to keep you in suspense but had my little 6-year-old with me for the week and had made prior plans for some fun activities with him and there was no way I was going to let the demonic spirits of slander, obstruction, destruction, and death to disturb our peace.”

Love him or hate him, Victor Richards is one of the most popular amateur bodybuilders of all time. The mystical bodybuilder continuously challenged the status quo and pushed for more pay and rights for bodybuilders.

If your goal is to build muscle mass, Vic’s diet and training program should do the trick. Stick to the regimen for at least 12 weeks, and let us know how it goes. Best of luck!

Chest and Triceps Workout for Building Muscle and Strength