Revealing the heavy-duty training and diet that went into the remarkable physique transformation of John Krasinski from The Office’s Jim Halpert to badass Jack Ryan. 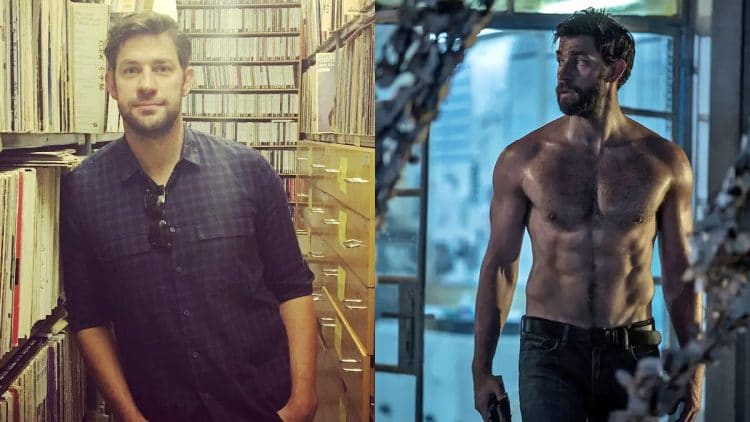 Of all the movie star transformations over the past few years, few have been as impressive as John Krasinski’s. No one could have ever imagined the dweeb Jim Halpert from The Office morphing into a ripped, muscular Jack Ryan in the Amazon series of the same name. Yet, that is precisely what he did.

In this article, we delve into the training and diet that helped Krasinski on his journey from The Office to Jack Ryan.

Who is John Krasinski?

John Krasinski was born on October 20th, 1979, in Boston, Massachusetts. His father was an internist, and his mother worked as a nurse. John is the youngest of three brothers. His heritage is Polish on his father’s side and Irish on his mother’s side.

John’s first performance in front of an audience was when he played Daddy Warbucks in a production of the musical Annie in sixth grade. As a high school senior, he appeared in a play written by friend and future The Office co-star, B.J. Novak.

After graduating from Newton South High School in 1997, John taught English in Costa Rica for six months. He then returned to the US to attend Brown University, majoring in English. He graduated in 2001.

After graduation, Krasinski attended the National Theater Institute in Connecticut. He also studied at the Royal Shakespeare Company in England, along with the Actor’s Center in New York. In 2000, Krasinski worked as an intern on Late Night With Conan O’Brien. After graduating from Brown, he moved to New York to pursue an acting career. He appeared in a few TV shows and plays.

Krasinski’s big break came in 2004 when he was cast in the US version of The Office. He appeared in every episode of the show’s nine-year run (2005-2013). During The Office years, Krasinski also appeared in a number of movies, including License to Wed (2007), Leatherheads (2008), and Something Borrowed (2011). In 2012, he starred with Matt Damon in Promised Land.

In 2016, Krasinski played Jack Silva in the Michael Bay war movie 13 Hours: The Secret Soldiers of Benghazi. Bay’s film was the first time Krasinski had to get in shape for a role. He packed on muscle mass while shedding body fat for the movie.

In 2018 Krasinski secured the role of Jack Ryan in the Amazon series of the same name. He is the fifth actor to play the role. At the time of this article’s publication, two seasons have been released, with the third season in production.

Prior to getting serious about getting in shape for his roles, Krasinski was a committed foodie. He especially loved to dine at all-you-can-eat buffet restaurants. However, as soon as he signed the contract to star in 13 Hours, he put an end to his indulgent relationship with food.

Krasinskis’ dieting discipline was the key driver in his spectacular body fat percentage drop from 25% to 9% in just four months. For that four-month period, he mainly ate lean protein and low carbohydrate vegetables. He also drank a lot of water (averaging about half a gallon each day).

The program was built around basic compound bodybuilding type exercises, such as the squat, pull-up, and bench press.

2. If you’re on a deadline, get comfortable training twice a day

Krasinski trained twice per day. One workout focused on cardio for fat loss, while the other was all about building muscle. Furthermore, he trained five days a week, taking the weekends off.

3. HIIT functional training will get you shredded to the bone

Krasinski did a lot of intense metabolic training, including functional training with sleds and battle ropes. John favored HIIT-type cardio workouts but did mix it up with steady-state, alternating between the two.

Since his role in 13 Hours: The Secret Soldiers of Benghazi, Krasinski tries to always stay within three weeks of being in action movie-ready shape.

Krasinski preferred to use the rowing machine because it is a full-body workout machine. Unlike most cardio options, which are heavily lower body-centric, rowing works 80 percent of your muscles. Because it is a closed chain exercise, rowing is also very joint-friendly.

Here is what Krasinski’s training looked like for his 13 Hours: The Secret Soldiers of Benghazi transformation —

Krasinski isn’t big on supplements and prefers to get most of his nutrients from whole foods. The couple of supplements he uses include —

John would take a whey protein isolate shake within about a half-hour of completing his workout each day. It helps replenish his depleted glycogen stores and provides amino acids for protein synthesis. He added almond butter and coconut oil to the shake for healthy fats. Each shake would include about 25 grams of protein.

Krasinski took a multivitamin daily to ensure that he was meeting his micronutrient needs. It included omega-3 fatty acids, vitamin D, and zinc to boost his energy levels and reduce post-workout muscle soreness.

John Krasinski’s transformation from his role in The Office to convincingly playing badass roles in 13 Hours: The Secret Soldiers of Benghazi and Jack Ryan gives hope to all guys who don’t possess the genetics of Chris Hemsworth or Arnold Schwarzenegger.

Each of us can draw inspiration from what Krasinski has achieved through his transformation regimen and make use of his methods to carve our dream physique.