Find out how J.K. Simmons built a shredded physique in middle age to play Commissioner Gordon in Justice League. 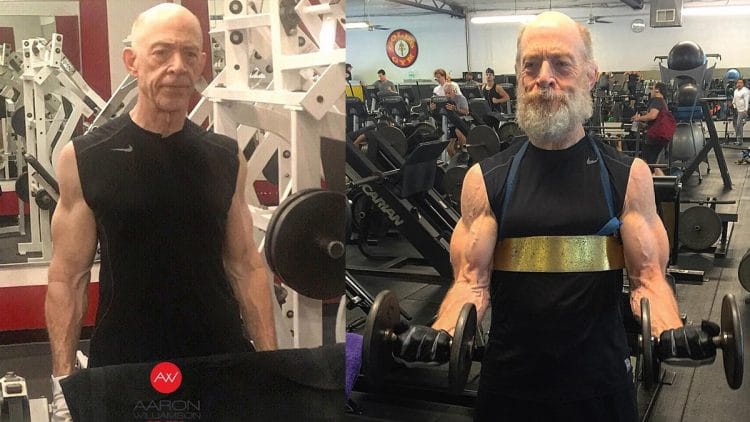 When you think about Hollywood muscle men, J.K. Simmons is probably not the actor that comes to mind. Zac Efron, Chris Pratt, and Chris Hemsworth are names that usually roll off the tongue. In fact, you may not even be familiar with the name J.K. Simmons.

You’ve probably seen Simmons in shows like The Closer and Law and Under. He also played Commissioner Gordon in Spiderman and Justice League movies.

You’re right – Simmons was born on Jan. 9, 1955. Yet, he could give many youngsters a run for their money in his jacked avatar. He got ripped to the bone for his role in Justice League (2017).

In this article, we look at the workout and diet Simmons followed to play Commissioner James Gordon in the DC movie.

Jonathon Kimble Simmons was born in Grosse Pointe, Michigan. His father was a music teacher, while his mother worked as an administrator. When Jonathan was 18 years old, his family moved to Missoula, Montana, where his father took up a job as the director of the School of Music at the University of Montana.

Simmons attended the University of Montana, graduating in 1978 with a music degree. He then moved to Seattle, Washington, and became a member of the Seattle Repertory Theater, which led him to Broadway and his 1992 break in the musical Guys and Dolls.

J.K. made his television debut playing a patrol officer in the Popeye Doyle series and was a regular on series such as Law & Order, New York Undercover, and Oz. He also played assistant LAPD chief Will Pope in the series The Closer.

Simmons has appeared in several popular movies, including the Sam Raimi Spiderman series, Whiplash and Justice League. He is also a sought-after voice actor.

In 2021, Simmons received an Academy Award nomination for best-supporting actor for his role as William Frawley in the Lucille Ball biography Being the Ricardos. It was his second nomination, the first being for 2014’s Whiplash.

Simmons worked with celebrity personal trainer Aaron Williamson (a former marine and competitive bodybuilder) for his transformation and experimented with various diets before settling on the one that helped him gain muscle mass while shedding body fat.

Below is the diet program Simmons followed to get in shape for his role in Justice League:

Simmons put in some serious training for the Justice League movie as he wanted to put on significant muscle mass for his role.

“[I want] some beefing’ guns to show people that I’m not just that guy that does Farmers commercials!”

Over the years, Simmons has picked up several aches and pains, and his trainer had to stay away from compound moves like the squat and bench press.

Instead, Williamson introduced the actor to unilateral dumbbell training, which involved working one side of his body at a time. This type of training helped Simmons train a body part hard and heavy without putting undue stress on the joints. 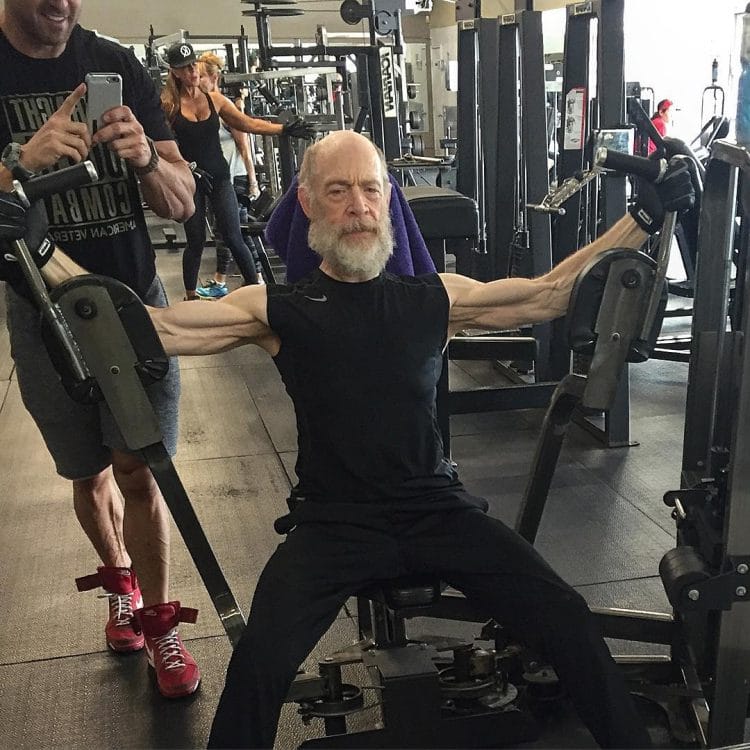 Williamson had Simmons go through two training phases in preparation for Justice League. For the first 12 weeks, he had him perform two different workouts. He would alternate training routines in each gym session, performing three workouts per week on alternate days.

For the final 12 weeks leading up to the movie shoot, Williamson moved the actor to a more traditional bodybuilding type split routine. He worked chest and triceps on Monday, back and biceps on Wednesday, and legs, shoulders, and abs on Friday. Furthermore, he had Simmons using supersets and giant sets and hitting the muscles from different angles.

Let’s take a look at each of the training phases:

J.K. Simmons would ride his bicycle fifteen minutes to the gym. This would serve as part of his warmup.

The first 12-week phase will help build a foundation of muscle and leanness and the second phase focuses on building muscle mass and conditioning.

Here’s the exact routine that Simmons used to transform his body:

The last two exercises are super-setted to failure, meaning that Simmons does one directly after the other until he cannot do another rep. They are designed to annihilate the target muscle group.

Wednesday: Back, Shoulders, and Biceps

J.K. Simmons is not a fan of sports supplements. He believes that as long as you are eating healthy, high-protein whole foods, you will get all the workout nutrients you need. He does, however, make regular use of a whey protein powder.

Simmons will usually have two protein shakes per day as his in-between meal snacks. He finds that the shakes fill him up so that he doesn’t have to worry about in-between meal junk food cravings.

Simmons prefers to use a whey protein isolate protein powder that contains 6-8 grams of branch chain amino acids as it provides him with virtually no carbohydrates and around 27 grams of protein per serving.

The combination of dedicated and smart training and low carb and disciplined eating has totally transformed J.K. Simmons’ physique. It doesn’t matter if you’re in your 50s or early teens, Simmons’ transformation program will help you achieve your goal physique.