The four-time Mr. Olympia talked about his use of Testosterone and said he's cut out fasted cardio for his latest physique transformation. 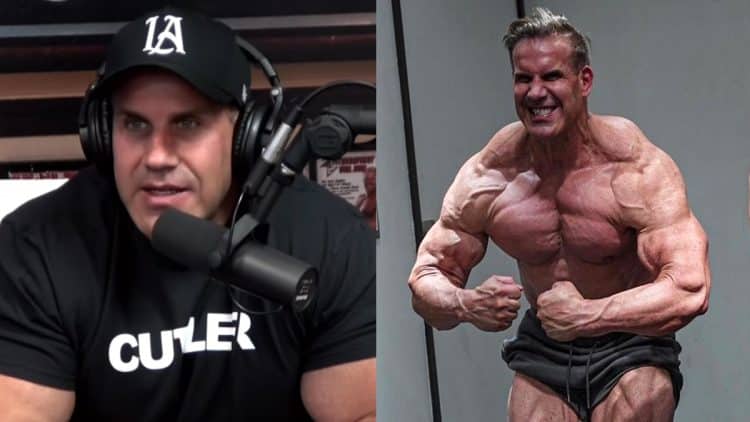 Four-time Mr. Olympia Jay Cutler is bringing fans along with him on his latest ‘fit for 50’ physique transformation journey. During a recent podcast, Cutler discussed his cycle, diet, and plan for rebuilding his physique in 2023.

“I told you the protocol has not changed,” Jay Cutler said.

While he’s stepped away from competing, Jay Cutler is one of the most visible ambassadors in the sport of bodybuilding. Since retiring in 2013, fans have called for Cutler’s comeback. He left the community in suspense for a few days after he was caught posing alongside a fitness influencer named ‘Lexx Little.’

Days after the viral photo circulated online, Cutler shot down a potential bodybuilding return. Even though he sported a shredded build, he said he was transforming his body as part of a fit for 50 challenge. While rebuilding his physique, he teamed up with eight-time Olympia Ronnie Coleman for a workout recently and recapped their on-stage rivalry.

In addition to his training sessions, Cutler has been open about his use of bodybuilding drugs. As part of the current challenge, Cutler emphasized that he won’t use Trenbolone and would stick to testosterone replacement therapy only.

Speaking on his latest podcast, Cutler talked about his decision to get back in shape and mentioned that he’s still using 200 milligrams of Testosterone Cypionate weekly.

Jay Cutler Reflects on TRT Use and Quitting Fasted Cardio

According to the bodybuilding legend, his protocol hasn’t changed.

“You know what I’ll tell you and people love this because they listen to me — I quit fasted cardio. It’s making my body look different. Think about this. I’m depleted every day and I still get up on a routine and did fasted cardio. If you don’t have enough [energy] for the muscle, what’s the point of doing fasted cardio. I don’t know [what I weigh] I haven’t weighed myself.”

Cutler Looks Back on Eating Over 140 Egg Whites A Day

Milos Sarcev and Cutler agree that eggs are the most optimal protein source for a bodybuilder.

“Eggs [are the best source of protein]. Any wild game,” says Milos Sarcev.

In order to maintain his status as one of the best bodybuilders in the world for 12 years consecutively, Cutler ate a staggering number of egg whites during his career.

“30 at a time. 30 egg whites a sitting. My plate bro was this big. This is when I did the 50 grams of carbs I’m not kidding. 30 egg whites in a sitting, four times,” says Cutler. “There’s three grams of protein in each one. These were large eggs.”

Even though Cutler wouldn’t entertain a comeback, the same can’t be said for eight-time Mr. Olympia Phil Heath, who last competed at the 2020 Olympia contest, where he finished third. Phil joined Cutler to discuss a potential bodybuilding return and said he’s coming back in 2023.

Whether it’s a diet, cycle, or training session, Cutler doesn’t shy away from appeasing the curiosity of fans. He hopes to bring his best look later this year since stepping away from the stage 10 years ago.