Curry, a former Mr. Olympia, believes new blood like Andrew Jacked and Michal Krizo will break into the top 10. 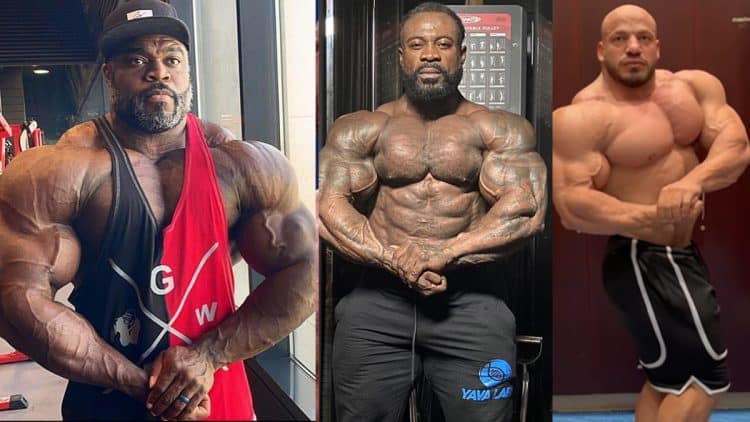 The 2022 Mr. Olympia contest is rapidly approaching, and Men’s Open contender Brandon Curry is determined to walk away as a two-time champion. Approximately two weeks from the biggest show of the year, Brandon Curry joined Fouad Abiad’s podcast to reveal his top 10 and current weight.

This year’s bodybuilding season saw a crop of new talent emerge in the Men’s Open division. In March, Flex Wheeler’s protégé Andrew Jacked earned his Pro card on the Arnold Amateur stage. From there, he secured an instant qualification to this year’s Olympia after claiming the 2022 Texas Pro title. He later cemented his status as a top threat with a victory at the Arnold Classic UK show.

Jacked wasn’t the only athlete to make a huge impression in the Open class this year. Slovakian mass monster Michal Krizo did as well. The 32-year-old gained popularity in July after signing with the NPC. Last month, Krizo managed to earn his IFBB pro card and weeks later stamped his ticket to Olympia by winning the EVLS Prague Pro. Given how many new faces are slated to compete at Olympia, heavy hitters from last year, including Brandon Curry, will need to bring their all-time best.

Aside from winning the 2022 Arnold Classic, Curry has been quiet throughout the season. He issued very few physique updates, but from what fans have seen, Curry is on track to bring one of his best looks yet. During one of Foaud Abiad’s recent podcasts, Curry revealed his weight and mentioned contenders like Jacked and Krizo are likely to break into the top 10.

Before giving his picks for the upcoming show, Curry revealed his weight is above 260 currently.

“I’m in Kuwait. I’ll head there [to 2022 Olympia] on the tenth. We’ll just say I’m above 260 right now,” Brandon Curry said. “We’re trying to keep things quiet you know. So, you know we’re going to come back and try to bring the best Brandon Curry to the stage as of yet and see where the chips fall from there.”

According to Curry, debuting bodybuilders like Rafael Brandao, Michal Krizo, and Andrew Jacked all have the potential to place in the top 10 at 2022 Olympia.

“I haven’t seen him [Rafael Brandao] in person but I can just tell he’s maturing,” Curry shared. “I questioned his back and then I saw a back double bicep shot, so he’s definitely improved his back. I think he’ll definitely flow better than Krizo but I think Krizo will make an impact because he’s just so new. He’s so new, he’s a big guy — I think he’s got to get his conditioning better for this show, and he’s going to make an impact this year.”

While some have doubted Krizo’s conditioning ahead of Olympia, Curry isn’t one of them. He believes the separation in Michal’s legs and shape will carry him to success.

“I think his conditioning is going to be better by the Olympia. I mean — he’s been dieting for how long. I think the separation in his legs and the shape is going to carry him enough. If anything, he will have to hit the back shots perfect. I’ve seen him improve those shots over the season. If he does that, I think he will be good.”

In spite of the hype surrounding Nick Walker, Curry doesn’t believe ‘The Mutant’ has made enough improvements from last year. He added that Nick is likely to fade if he’s put through too many comparisons.

His thing is — how much comparisons are they going to put him through. That’s going to be the Achillies’s heel for him. I think the more comparisons he has to go through, the more he’ll start to fade.”

Curry admitted Walker has great abdominal control, but the longer the comparisons go, the more difficult it is to keep the stomach ‘intact’ (not distended).

“He can pose and pose and pose but the stomach is going to be hard to keep that intact. The [longer it goes] the more he’ll have to breathe, you know,” says Curry. “He’s really good at holding his poses but it’s just a matter of fighting and knowing he’s fighting, especially if they put him beside Hunter for some reason.”

Brandon Curry believes many top contenders at the upcoming Olympia have similar physiques.

“The type of physiques all of them [in the Men’s Open] are similar in a sense. I put Hunter in there, Hunter can offer conditioning, but I think he’s going to be so much about that this year that he’s going to be flat.”

With only a few weeks until the marquee event, retired pros and coaches have offered their Men’s Open predictions. Earlier this week, bodybuilding gurus Markus Ruhl, Milos Sarcev, Dennis James, and Chad Nicholls made their picks official. Unlike Curry’s list, they all agree that Big Ramy will win a third title next month.

Final preparations for the show are wrapping up and Curry appears more confident than ever. Despite new talent expected to compete, Curry is laser-focused on bringing home another Sandow trophy.