The 2019 Mr. Olympia teased the first physique update of his 2022 contest prep, appearing arguably the best he's ever looked. 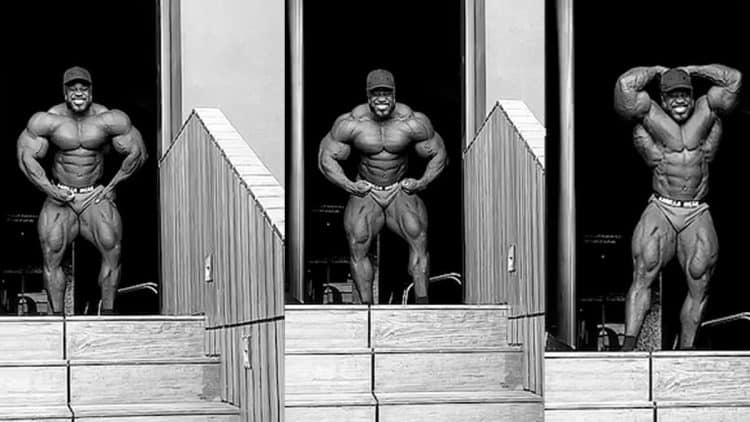 Despite being relatively quiet on social media, Brandon Curry plans on letting his physique do the talking at his next bodybuilding contest. In a recent Instagram post, Curry shared his first update in contest prep for 2022 Mr. Olympia looking absolutely massive with granite conditioning.

Curry quickly made his presence known in the IFBB Pro League. He’s a top threat in the Men’s Open division, a category that often showcases mass monsters. As a top-tier bodybuilder, Curry has found success in the sport with his appealing shape, aesthetics, and balanced proportions.

In 2019, Curry reached the pinnacle of the sport when he secured his lone Mr. Olympia title. En route to his career’s biggest victory, Curry outshined runner-up William Bonac and third-place finisher Hadi Choopan. However, since that milestone, he’s found himself in second place at Olympia for two years back-to-back in 2020 and 2021.

In March, Curry tested his mettle at the 2022 Arnold Classic in Ohio. He was pushed by rival Bonac on stage, who brought arguably the more conditioned package. By the end of the contest, Curry was crowned champion, which many believe was made possible by his structure and deep muscle separation.

The past two years saw Mamdouh ‘Big Ramy’ Elssbiay reign over the Men’s Open division at Olympia. Since stripping the title from Curry’s hands in 2020, no one has been able to stop Ramy’s domination. Before ending his off-season this year, the Egyptian champion informed fans and followers that he was tipping the scales at 337 pounds.

Given that Curry is the only former Mr. Olympia winner to challenge Big Ramy at this year’s contest, many are excited to see what type of improvements he’s made since training in Dubai over the past few months.

In his latest post made to Instagram, Curry showed off a progress photo. It remains unclear at what stage of prep this picture was taken, however, Curry did reveal in the comment section that it is indeed from his current prep.

“🤫 When do you think this was from? Current prep? Past prep?” Brandon Curry wrote.

Immediately following the physique update, fans took notice of Curry’s upper body roundness/fullness. But more importantly, many highlighted his legs, which look bigger from years prior. Specifically, fans called attention to the feathered teardrops (Vastus Medialis) on his legs.

There is no shortage of bodybuilding icons discussing the 2022 Mr. Olympia Men’s Open lineup. Four-time Mr. Olympia Jay Cutler and bodybuilding legend Ronnie Coleman agree that Big Ramy will defend his throne in December. When breaking down the event, Cutler implored anyone watching ‘NOT’ to count out Curry or Bonac at this year’s Olympia.

Coleman and Cutler weren’t the only legends to name-drop Curry. Eight-time Olympia kingpin Lee Haney had a message for anyone eying Ramy’s title: don’t play the size game. While examining the potential lineup, he suggested that Curry should focus on bringing more muscle separation.

According to seven-time O winner Phil ‘The Gift’ Heath, Ramy could lose his status as champion if he ‘leaves the door open’ as he did in 2021. Heath says either Hadi Choopan or Brandon Curry could catch Ramy slipping at the marquee show, assuming the champ doesn’t come in with pristine conditioning.

This year’s Mr. Olympia contest promises to be one of the most memorable in years, with newcomers, heavy hitters, and former champions waging war for a coveted Sandow trophy. After exiting ‘shadow mode’ for a physique update, fans expect to see Curry at his all-time best on the Olympia stage this winter.