Taking a look back at the biggest moments in bodybuilding, strongman, powerlifting, and CrossFit from the year that was 2020 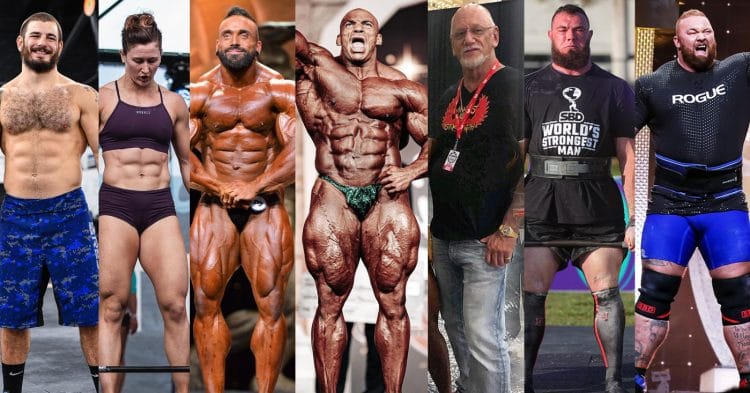 Things were absolute insane in 2020, to say the very least. We close the year out by taking a look back through what went down over the last twelve months.

It goes without saying that the last year has been a trying one on us all. While things may have started off well, things took a turn around May, when the global pandemic put the world to a halt.

That being said, there was plenty to be happy about with 2020. Things were changed, events were canceled and rescheduled, yet there was still a lot of amazing performances.

Today we take a look at some of the highlights from the year that was, and remind you of all the incredible moments from the last twelve months inside the worlds of bodybuilding, powerlifting, strongman, and CrossFit.

Something from 2020 that seemed to have come out of nowhere, was the sale of the Mr. Olympia in February. Wings of Strength owner Jake Wood had purchased the entity and would be taking over as CEO.

This appeared to be a perfect fit, as Jake had always been a proponent for women’s bodybuilding. The return of the Ms. Olympia already signaled something of a new era for the sport, and he was a welcome addition.

Along with the Olympia, Muscle and Fitness as well as other publications were also sold. So far, Jake has been a strong leader, and the future is looking bright for the sport.

Julius Maddox On The Road To Greatness

There were a lot of powerlifting world records set in 2020, honestly enough to write an entire article on that alone. However Julius Maddox set out on a path to do the unthinkable: bench press 800lb.

Things seemed to be lining up for him, with each training session making fans more confident that he will succeed. Yet a misleading incident during the world record attempt left him mildly injured and unable to do the lift.

Julius has been back on the road towards getting that heaviest bench press of all time. Hopefully next time around, things will go smoother than his previous efforts.

Things first started looking bleak in 2020, just before the Arnold Classic. Ohio was among the first places in the United States to be hit with the coronavirus, and it left officials in a bind to make a decision.

In the end, the contest would proceed at a much smaller capacity, with the Festival and several contests being outright canceled. In the end, William Bonac would be crowned Arnold Classic champ without a minimal crowd.

This was the start of a complicated time in the year, but with hindsight being what it is, you can appreciate the efforts from the officials involved in this contest to still put it on even when things were falling apart.

A more somber side to 2020 is the amount of heartbreaking deaths that occurred throughout the year. At one point it seemed that every week had another loss, whether it be bodybuilders, powerlifters, or more.

Easily one of the more shocking losses was the tragic passing of Luke Sandoe. It came out of nowhere, and left the community stunned. An award was even named in his honor, given to the British Grand Prix winner.

There was also the death of strongman Aaron Page, which was another shock. Words can not express the feeling of these losses on the community. It made an already difficult year, just a bit more hard to handle.

Strongman champion Hafhtor Bjornsson planned to attempt a world record 501kg deadlift, in competition. However the global pandemic shut down contests, leading to the decision to attempt the record in his home.

He was the talk of the town in the first part of 2020, with heated discussions on whether this record should count. Yet he pulled the weight, and the lift is officially in the record books.

Since scoring this record, Bjornsson has since retired from strongman to prepare for a boxing match with his rival Eddie Hall. This fight goes down September of 2021, and will be well worth checking out.

The 2020 CrossFit season was a rough one with multiple contests being shut down. The CrossFit Games proceeded anyway, albeit in a unique way, and reigning champs Tia-Clair Toomey and Mat Fraser stayed supreme.

The biggest spot of controversial came from then-owner Greg Glassman, after numerous complaints of misconduct arose. This would lead to a new owner and CEO for the brand, Eric Roza to take the lead.

There was a lot of repairing for Roza to do as the new owner, and it seems that he has done just that. The next year will be crucial to see the new direction of the sport, and how he changes things.

The 2020 World’s Strongest Man was highly anticipated due to the fact that there had been virtually no strongman competition to take place after things shut down, and it certainly delivered.

The highlight of the competition was easily the performance of Oleksii Novikov. Not only did he become tied for the youngest man to win the contest, but he scored a 18in dollar deadlift record in the process.

All things considered, the future appears very bright for the young Novikov. All eyes will be on him next year, to see if he can replicate his success.

The final major event to close out 2020, was the Mr. Olympia. The premier bodybuilding contest in the world normally takes place earlier in the year, but it got pushed back to December and moved to Orlando, Florida.

There were a ton of standout performances and new champs crowned this year. The most notable one was obviously Big Ramy, who won the Men’s Open title and looked as good as his fans knew he could.

In addition to him, we also saw Shaun Clarida break through and win the 212 Olympia. Not to mention the long awaited return of the Ms. Olympia, that saw Andrea Shaw earn the win.

This year had a lot of wild moments, but it was only fitting that the Mr. Olympia would close things out with a bang. It promised to make history, and it delivered on that in virtually every way.

What was your favorite moment of 2020? What are you looking forward to the most for next year?